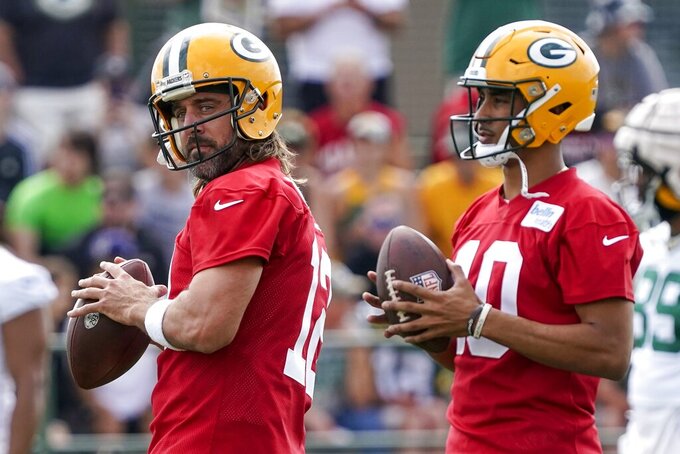 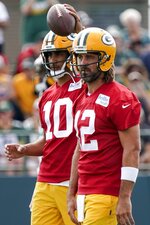 GREEN BAY, Wis. (AP) — Aaron Rodgers says he expects the Green Bay Packers offense to face plenty of adversity during the preseason as it lines up against a defense that seems far more settled.

The four-time MVP quarterback believes that could prove beneficial in the long run.

“I think we need that,” Rodgers said. “We need to go against a top-notch defense every single day and kind of get it handed to us.”

Rodgers returns for his 18th season in Green Bay as the reigning MVP, just as he was a year ago. But the circumstances have changed dramatically.

Last year, Rodgers reported for training camp after sitting out the Packers mandatory minicamp in a standoff with team management. The two parties have since smoothed out those differences. Rodgers said earlier this year he “definitely” plans to end his career as a Packer.

“We had a process to go through collectively, and it’s nice to be on the other side of those conversations,” Rodgers said. “I enjoyed them. I enjoyed the conflict and the back and forth and trying to find some common ground, and I think it’s meant a lot to all of our friendships individually.”

Rodgers underscored how far things have come by detailing on Wednesday an incident from a few years ago in which a staffer misidentified defensive tackle Kenny Clark on cutdown day as a player who was going to get released and asked him to come upstairs.

Clark, a two-time Pro Bowl selection, confirmed the account Thursday and said it happened as he was entering his third season.

Rodgers feels much better about the organization now and even injected some levity into training camp. He reported in a white tank top to resemble Nicolas Cage’s character from the 1997 movie “Con Air,” a look that went viral after the Packers posted a video of their quarterback’s arrival on social media.

Rodgers, 38, arrives at training camp with plenty of work to do now that All-Pro wideout Davante Adams is with the Las Vegas Raiders.

Adams had caught 432 passes for 5,310 yards and 47 touchdowns over the past four seasons to lead all NFL players in each of those three categories. The Packers also must replace deep threat Marquez Valdes-Scantling, now with the Kansas City Chiefs.

Rodgers’ best seasons have come when he’s had a clear-cut top wideout such as Adams or Jordy Nelson. He doesn’t have that luxury at this point as he works with a group currently missing veteran free-agent signee Sammy Watkins and rookie second-round draft pick Christian Watson, who are unavailable for the start of training camp because of injuries.

“When you walk in the locker room for so many years and you see 87’s locker over there, Jordy Nelson, (or) you see Davante Adams, it gives you a different feel,” Rodgers said. “You just know you’ve got that guy. And we have some opportunity for some guys to kind of step into that role.”

That’s not the offense’s only concern.

Rodgers is confident the Packers will again have a strong offense even after all the offseason upheaval. It just might not be evident early in the preseason, though the offense fared well Wednesday in the first training camp workout.

“We’re going to take our lumps,” Rodgers said. “And I look forward to that because it’s going to build some character I think through the adversity we have to face as an offense after some of the pieces that we don’t have right now.”

Packers coach Matt LaFleur says the approach Rodgers takes each day should help those newer players in their development.

“I think there’s a standard which, number one, he holds himself to,” LaFleur said. “And then I think all the guys kind of see that. They just stand up a little straighter in that huddle, so to speak. He demands it of himself first and foremost. He exemplifies what it looks like to be a pro.”

One positive for Rodgers is that he is working again with quarterbacks coach Tom Clements, who is back for a second stint in Green Bay after previously working for the Packers from 2006-16. Rodgers led the Packers to a Super Bowl title in the 2010 season with Clements as his quarterbacks coach.

Rodgers remembers that as a young player, he “wanted nothing more than to make Tom Clements happy.”

“I loved that Tom held me accountable in more ways than just the stat sheet,” Rodgers said. "It was all about the fundamentals, the decision-making, the footwork and stuff that really actually has molded me into the quarterback I am today.”

“He’s like the cool uncle to me,” running back A.J. Dillon said. “He’s the guy like in college and you’re in middle school, and he’s telling you these cool stories, so every time you go out there, you want to impress him and make sure you’re doing the right thing.”