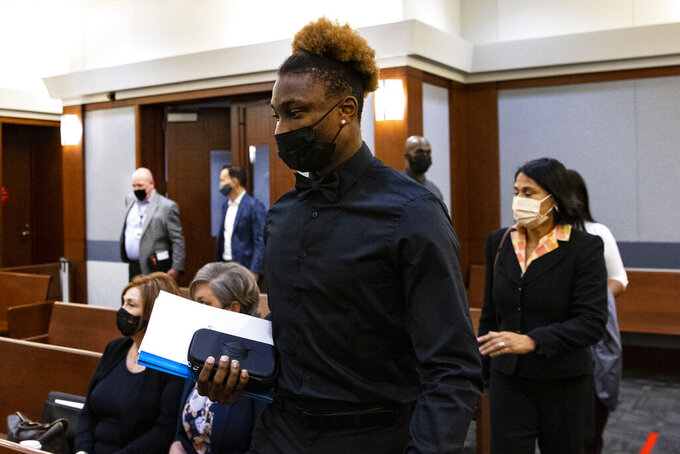 FILE - Former Las Vegas Raiders wide receiver Henry Ruggs III arrives at court during his hearing at the Regional Justice Center, on Nov. 22, 2021, in Las Vegas. During a preliminary hearing of evidence, on Feb. 3, 2022, Ruggs III attorney, David Chesnoff, told a judge he has received body-worn camera video from police who arrived after the Nov. 2, 2021 high-speed crash that killed a woman and cost Ruggs III his spot on the team. Outside the court, Chesnoff said he had not yet viewed all the video footage. (Bizuayehu Tesfaye/Las Vegas Review-Journal via AP, Pool, File)

LAS VEGAS (AP) — A lawyer for ex-Las Vegas Raiders player Henry Ruggs told a judge he has received body-worn camera video from police who arrived after a high-speed crash that killed a woman.

The former NFL wide receiver didn't have to appear in court Thursday with his attorney, David Chesnoff, ahead of a March 10 preliminary hearing of evidence that will determine if Ruggs faces trial in state court.

Outside court, Chesnoff said he had not yet viewed all the video footage about the Nov. 2 crash.

Ruggs, 23, a former first-round NFL draft pick, is on house arrest with electronic GPS and alcohol monitors. He faces felony driving under the influence and reckless driving charges that would get him a mandatory two years and possibly more than 50 years in prison if he’s convicted. He also is charged with misdemeanor gun possession.

The Raiders released Ruggs hours after the pre-dawn wreck and vehicle fire that killed 23-year-old Tina Tintor and injured Ruggs and his girlfriend, Kiara Je’nai Kilgo-Washington.

Ruggs is accused of driving 156 mph (251 kph) with a blood-alcohol level twice the Nevada legal limit before his Chevrolet Corvette slammed into Tintor’s vehicle on a residential boulevard.