Ryan surprised, hopeful after getting benched by Colts 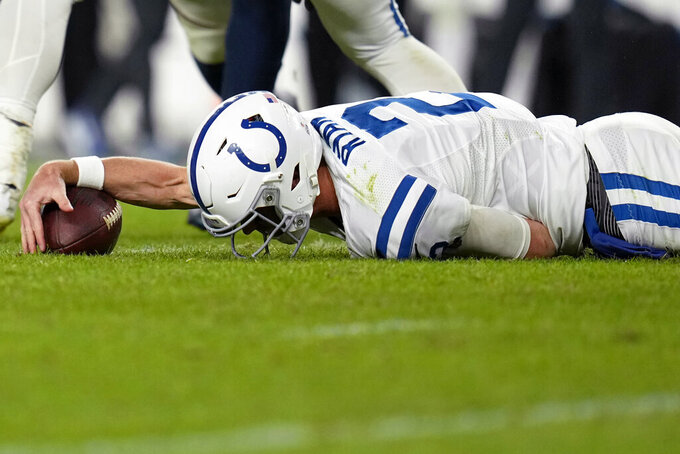 Indianapolis Colts quarterback Matt Ryan (2) stretches for yardage during the second half of an NFL football game against the Denver Broncos, Thursday, Oct. 6, 2022, in Denver. (AP Photo/Jack Dempsey)

INDIANAPOLIS (AP) — Indianapolis Colts quarterback Matt Ryan stood at his locker Wednesday, the disappointment etched all over his face.

Two days after coach Frank Reich announced he was benching the 2016 league MVP, little had changed for the 15-year veteran. He was still upset that just seven games into his Indy career, he'd lost the starting job possibly permanently.

“I'm disappointed personally, but I'm here for the team," Ryan said in an emotional tone. “As a player, you just always anticipate it's next week, getting ready and you're going to go and there is a little bit of that surprise and shock at the decision. That's a decision they had to make and as a player and teammate you have to move forward and help out wherever you can.”

For Ryan, it was another rare first in what may go down as the strangest and toughest seven-month stretch of his stellar career.

But even the soreness in his separated throwing shoulder couldn't ease the sting of this week's reality.

The former Boston College and Atlanta Falcons star will be watching Sunday's game from the sideline, something the 229-game starter has done only three other times in his NFL career.

The reason this time is simple — turnovers and points.

He's fumbled a league-high 11 times in seven weeks, has thrown a league-high nine interceptions and has accounted for the most giveaways in the league (12).

Ryan, the most successful quarterback in Falcons history, came to Indy in March following Atlanta's public entry into the Deshaun Watson sweepstakes.

The rebuilding Falcons were seeking Ryan's successor and the Colts (3-3-1) eagerly gave up a third-round pick to add someone they thought could stabilize their most unstable position.

With a strong ground game and a top offensive line in Indy, it looked like a natural match.

Players and coaches spoke effusively about Ryan's ability to command a room and the huddle while team owner Jim Irsay told reporters he thought Ryan could stick around three or four more years.

But with new starters at left tackle and right guard, it didn't work. Reich made lineup changes, but it didn't alleviate the relentless pressure Ryan was under. He took 59 hits and 24 sacks.

So the next move was benching Ryan in favor of Sam Ehlinger, the more mobile second-year quarterback who has not thrown a pass in his three NFL appearances. Ryan isn't even second on the depth chart. He's listed behind Super Bowl 52 MVP Nick Foles.

Reich declined to say whether Ryan would be the backup if he was healthy.

“It's a tough situation, tough for everybody,” said Pro Bowl center Ryan Kelly, who will be snapping to his ninth starting quarterback in seven seasons. “I love the guy. I've said it eight times now, but I get close to all these guys. It sucks, man.”

At age 37 and with one year left on his contract, Ryan also understands he may never play again.

If he doesn't, it would be an unceremonious exit for someone who's accomplished plenty in his career.

Atlanta drafted Ryan with the third overall pick in 2008, the successor to Michael Vick. The rookie made an immediate impact, ending Atlanta's three-year playoff drought.

He earned the first of four Pro Bowl selections in 2010 and won the MVP Award while leading Atlanta to its second Super Bowl appearance and within minutes of its first title. But Tom Brady rallied New England from a 28-3 deficit and the Patriots won in overtime.

Ryan has completed 5,445 of 8,300 passes for 61,473 yards, 376 touchdown passes and led 45 fourth-quarter comebacks. Each rank among the top nine in NFL history and his 123 wins are one short of tying Hall of Famer Fran Tarkenton for 10th all time.

But after two more interceptions last weekend, one turning a Colts scoring chance into a pick-6 at Tennessee, Reich met with Irsay and general manager Chris Ballard and together they opted to end Ryan's status as the starter.

“In this league, you’ve got to go out there and win games. You’ve got to produce,” Ryan said. “You've got to play well. Obviously, I'm disappointed we haven’t played better. I thought we would.”