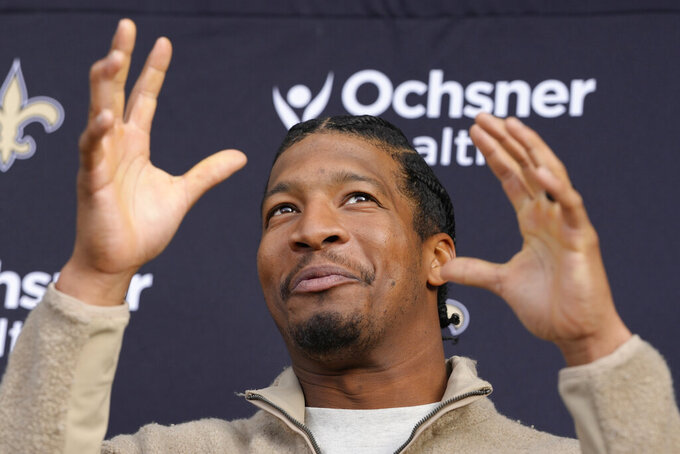 LONDON (AP) — New Orleans Saints quarterback Jameis Winston said he's preparing to start in the NFL’s first international game this year after being held out of practice on Wednesday with a back injury that has plagued him all season.

“They told me I wasn't practicing. It wasn't my choice,” Winston said. “I'm preparing like every week — preparing to play.”

Two other starters on the Saints' offense — wide receiver Michael Thomas and tackle Ryan Ramczyk — also were not at the team’s first practice in London ahead of their game Sunday against the Minnesota Vikings.

Winston, who has also dealt with an ankle injury, has been sacked 11 times in three games for New Orleans (1-2).

Winston said he did some rehabilitation at the hotel while the team practiced at the training facility of rugby club London Irish.

He wasn't a full participant at the Saints' past two Wednesday practices but was with the team and said the “preparation visually is always good.”

But neither Allen nor Winston expects that scenario. The quarterback said he'll be at practice Thursday and plans to start Sunday at Tottenham Hotspur Stadium: “That's my plan.”

Allen said the team decided it was a good day to get Winston “a little bit of recovery" and that he anticipates a return to practice on Thursday.

Asked if he has concerns about Winston's availability for Sunday, Allen said: “I don't think so.”

Ramczyk played the whole game against the Panthers after being listed as questionable with an elbow injury.

“With all those guys, we'll take them day by day,” Allen said. “Hopefully they'll be out there sooner rather than later, but the train keeps moving.”