Some of Tom Brady's greatest moments in his 22-year career 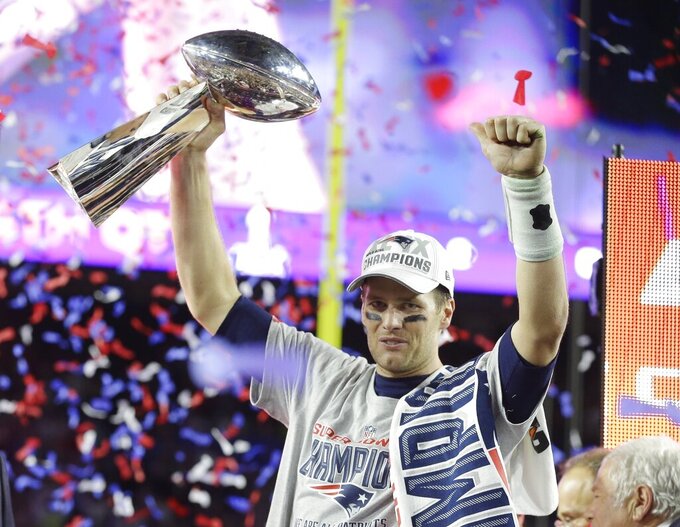 Tom Brady filled his 22 seasons in the NFL with more wins, yards passing and touchdowns than any other quarterback.

And nobody has ever earned more Super Bowl rings than Brady with seven.

Brady performed at such a high level that his opponents gauged their own failures a bit more kindly. Los Angeles Rams cornerback Jalen Ramsey, all of 5 when Brady made his NFL debut, summed up the league's respect for the quarterback who announced his retirement Tuesday.

“The best QB of all time retired, DANG… he threw his last TD on me," Ramsey wrote on Twitter.

Brady provided enough highlights to fill the video vaults at NFL Films. Here are just a few of his greatest moments:

Of course, the first Super Bowl decided in overtime featured Brady leading one of the greatest comebacks in sports history.

Trailing Atlanta 28-3 in the third quarter, Brady threw two TDs and then drove the Patriots 91 yards by completing six passes to set up the tying score inside the final minute. Once New England won the toss, Brady completed his first five passes as the Patriots won 34-28 for their fifth Super Bowl on Feb. 7, 2017.

Already the oldest quarterback to play in a Super Bowl, Brady outdueled the NFL's young MVP in Patrick Mahomes in Kansas City on Jan. 20, 2019, with another Super Bowl berth on the line. Brady answered each big drive by Mahomes, especially in a thrilling fourth quarter where the lead was swapped four times.

Once the Chiefs forced overtime, Brady took over after the Patriots won the coin toss. He converted on a trio of third-and-10s with a pair of passes to Julian Edelman and a third to Rob Gronkowski to set up the clinching TD run by Rex Burkhead.

Even coming close to Brady's record in Super Bowls will be very challenging after he won No. 7 in his first season in Tampa Bay. He threw two touchdowns to Gronkowski and a third to Antonio Brown as the Bucs routed Mahomes and the Chiefs 31-9.

And yes, Brady helped the Bucs become the first franchise to ever win the Super Bowl on its home field.

He threw the first within the first two minutes to Wes Welker and wound up with all six in the Patriots' first nine drives. Brady threw three passes to Gronkowski. And two of Brady's six TDs came in the final two minutes of the first half.

Brady finished with 363 yards passing in the Patriots' 45-10 victory.

Brady dominated his rivalry with five-time NFL MVP Peyton Manning, winning 11 of their 17 meetings and their first playoff showdown.

With the Patriots and Colts facing off in the AFC championship game on Brady's home turf on Jan. 18, 2004, Brady set the tone from the start. He capped an opening drive with a TD pass to David Givens and had the Patriots up 15-0 at halftime on the way to a 24-14 victory and another Super Bowl berth.

Brady gave a preview of postseason success to come on Jan. 19, 2002, in his only playoff game at old Foxboro Stadium with a big assist from a replay review.

Trailing the Oakland Raiders 13-10 with 1:50 left, former Michigan teammate Charles Woodson knocked the ball out of Brady's hand. The Raiders recovered the fumble and celebrated only to have the call reversed on replay by referee Walt Coleman because of the little-known Tuck Rule. The rule was later eliminated.

Brady found David Patten on the next play for a 13-yard pass, setting up Adam Vinatieri's tying field goal. In overtime, Brady completed eight straight passes to position Vinatieri for the winning field goal that launched Brady and the Patriots on the way to their first Super Bowl title.