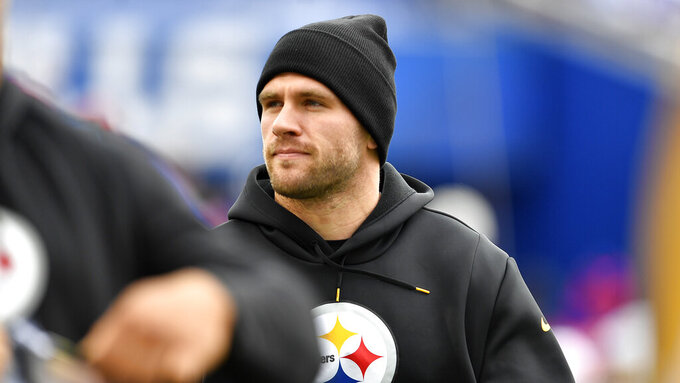 Pittsburgh Steelers linebacker T.J. Watt walks on the sideline during the first half of an NFL football game against the Buffalo Bills in Orchard Park, N.Y., Sunday, Oct. 9, 2022. (AP Photo/Adrian Kraus)

ORCHARD PARK, N.Y. (AP) — The Pittsburgh Steelers’ top pass-rushing threat T.J. Watt had arthroscopic knee surgery, which is expected to further delay his return while being sidelined by a pectoral injury.

Coach Mike Tomlin provided few other details following a 38-3 loss at the Buffalo Bills on Sunday in confirming a report first published by ESPN.com a day earlier.

“I’m not disputing the report. But I’m more concerned about the guys that played today, that were scheduled to play today, and their readiness, and what we did and did not do,” Tomlin said. “T.J. is on IR. When he’s scheduled to come back, if it’s close, we’ll have more details.”

Watt was the NFL’s Defensive Player of the Year last season, and has been sidelined since getting hurt during a season-opening 23-20 overtime win over the Cincinnati Bengals.

Tomlin and the Steelers have more immediate injury concerns after having several more players sidelined against the Bills.

Cornerbacks Cam Sutton (hamstring) and Levi Wallace (concussion), defensive tackle Larry Ogunjobi (back) and tight end Pat Freiermuth (concussion) were unable to finish the game Sunday. Tomlin did not have any updates on the injured players.