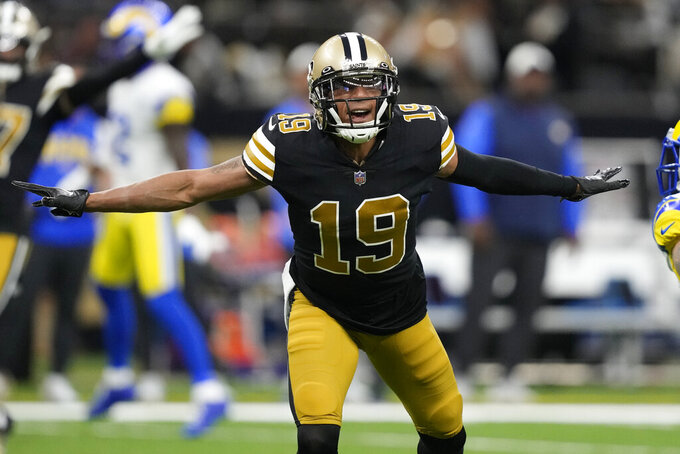 New Orleans Saints safety Chris Harris Jr. celebrates after breaking up a pass in the first half of an NFL football game against the Los Angeles Rams in New Orleans, Sunday, Nov. 20, 2022. (AP Photo/Gerald Herbert)

TURNOVER DIFFERENTIAL: Saints minus-12; 49ers minus-1.

SAINTS PLAYER TO WATCH: WR Chris Olave led the Saints with five receptions for 102 yards, including a 53-yard TD catch in Week 11. He has three games with 100-plus yards receiving, the most among rookies. His 51 catches for 760 yards receiving leads all rookies in both categories.

49ERS PLAYER TO WATCH: QB Jimmy Garoppolo matched his career high last week with four TD passes. Garoppolo has thrown at least two TD passes in five of his past six games and has gone three straight starts in the same season without an interception for the first time in his career.

KEY MATCHUP: Saints RT Ryan Ramczyk vs. 49ers DE Nick Bosa. Ramczyk has been one of the top right tackles in the league the past few seasons, but will have his hands full this week. Bosa plays both sides but spends more time rushing against right tackles. He has at least one sack in all but one game he has played this season and ranks second in the NFL with 10 1/2.

KEY INJURIES: The 49ers are hoping to get DT Arik Armstead (foot, ankle) and DE Samson Ebukam (quadriceps, Achilles) back this week.

SERIES NOTES: Five of the past six meetings in this series have been played in New Orleans. ... The Saints won their only trip to Levi's Stadium 41-23 in 2016. ... San Francisco's previous home win in the series came in the 2011 playoffs when the Niners beat the Saints 36-32 in the divisional round. ... Garoppolo threw four TD passes in his previous game against the Saints in 2019.

STATS AND STUFF: The Saints have won only once on the road this season, in Week 1 at Atlanta. ... QB Andy Dalton completed a career-high 84% of his passes last week (21 of 25) for 260 yards and three TDs without an INT for his career-best 149.6 rating. Dalton has 300-plus yards passing in three of his past four road starts. ... RB Alvin Kamara needs 104 scrimmage yards for his sixth consecutive season with 1,000. Since 2017, Kamara leads all running backs in receptions (416), yards receiving (3,648) and scrimmage yards (8,397). ... WR Jarvis Landry had his first TD receiving of the season last week and his first with the Saints. ... TE Juwan Johnson had a career-high fifth TD receiving of the season last week, tied for second most among TEs in 2022. ... DE Cameron Jordan is the only player with five-plus sacks in each of the past 11 seasons. ... DT David Onyemata has sack in three of his past four games. ... LB Demario Davis has a tackle for loss in five of his past six games. Davis needs one tackle for loss for his sixth straight season with at least 10. ... S Tyrann Mathieu has six passes defensed, six tackles for loss, three INTs and a forced fumble in eight games against the 49ers. ... San Francisco is seeking its first four-game regular-season winning streak since starting the 2019 season 8-0. ... The Niners have won the past 14 games Garoppolo has started and not thrown an INT. ... San Francisco has held three straight opponents scoreless in the second half for the first time since 2019 and has outscored the opposition 54-0 after halftime in those games. ... The Niners didn't allow a sack last week for the third time this season. ... San Francisco has allowed a league-low 47 first downs rushing this season. ... TE George Kittle and WR Brandon Aiyuk each had two TD catches last week, becoming the first pair of 49ers with multiple TD catches in the same game since Jerry Rice and Terrell Owens did it in 2000 at Dallas. ... Aiyuk is the first 49ers player since the merger to have at least five TD catches in each of his first three seasons. ... Bosa is the fifth 49ers player with back-to-back seasons with double-digit sacks.

FANTASY TIP: Niners RB Christian McCaffrey had seven carries for 39 yards last week, along with seven catches for 67 yards. He is averaging 110.7 yards from scrimmage the past few weeks and figures to continue to carry a heavy load.