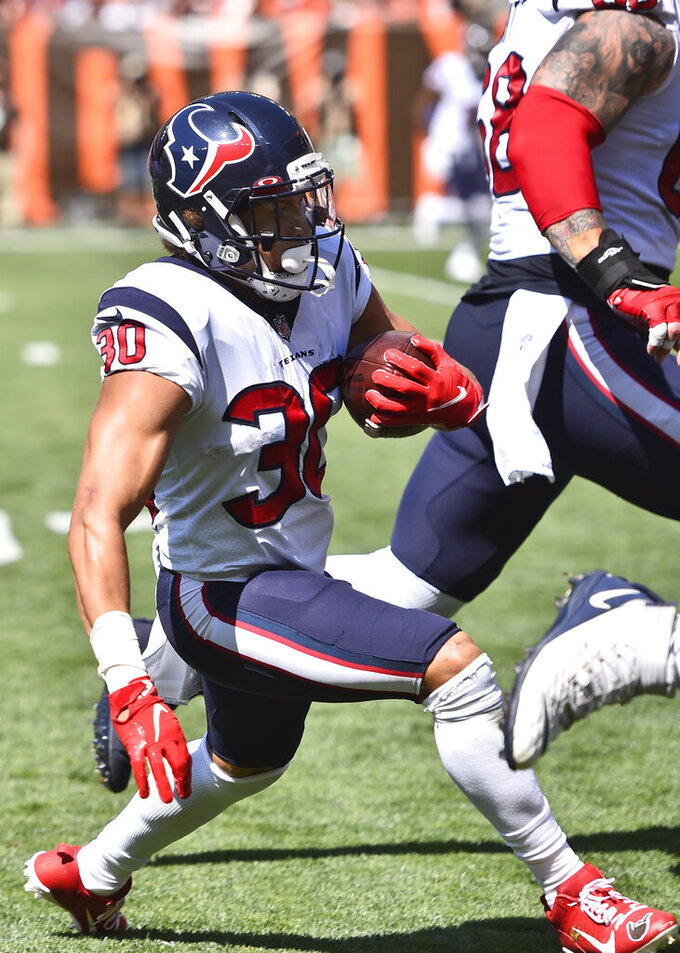 Houston Texans running back Phillip Lindsay (30) runs for a 22-yard touchdown during the first half of an NFL football game against the Cleveland Browns, Sunday, Sept. 19, 2021, in Cleveland. (AP Photo/David Richard)

OPENING LINE: Panthers by 7 ½, according to FanDuel SportsBook.

TURNOVER DIFFERENTIAL: Panthers plus-1; Texans plus-3.

PANTHERS PLAYER TO WATCH: Panthers DE Brian Burns has been getting steady pressure on opposing quarterbacks, although he has just two sacks to show. Burns had one play on Sunday when he appeared to sack Jameis Winston and force a fumble deep in Saints territory, but the play was reviewed and deemed an incompletion. “The refs hate me,” Burns said with a laugh.

TEXANS PLAYER TO WATCH: Rookie QB Davis Mills will make his first career start after Tyrod Taylor was placed on injured reserve with a hamstring injury. Mills, a third-round draft pick from Stanford, threw for 102 yards with a touchdown and an interception in the second half against the Browns after Taylor was injured. Offensive coordinator Tim Kelly thought Mills played well in his debut but expects him to be better against Carolina after working with the first team in practice this week.

KEY MATCHUPS: Panthers RB Christian McCaffrey vs. Texans front seven. McCaffrey has been a workhorse for the Panthers with 59 touches in two games. McCaffrey has 45 carries for 170 yards with one touchdown, and 14 receptions for 154 yards this season. When McCaffrey is in the game it allows Sam Darnold to use more play-action fakes and helps open the passing game.

KEY INJURIES: The Panthers will be without LG Pat Elflein (hamstring), so Dennis Daley will start. ... Second-year DE Yetur Gross-Matos injured his ankle against the Saints and there’s a chance he could miss the game. ... McCaffrey will start despite experiencing leg cramps against the Saints. ... Houston rookie WR Nico Collins was placed on injured reserve with a shoulder injury. ... WR Danny Amendola will likely miss the game with a thigh injury. ... DB Terrance Mitchell is in the concussion protocol and probably won’t play. ... S Justin Reid missed practice this week with a knee injury but coach David Culley said he’ll play against the Panthers.

SERIES NOTES: The Panthers have won the last three in the series. ... McCaffrey led Carolina to the win in the last meeting with 86 yards receiving and 93 yards rushing with a touchdown. ... Houston’s last win in the series came 34-21 on Sept. 16, 2007.

STATS AND STUFF: The Panthers are 2-0 for the eighth time in team history. They have reached the playoffs six of the previous seven times they started 2-0. ... This is Carolina’s first road game. ... The Panthers have outscored their opponents 33-0 in the first half this season and outgained them 547-147. ... Carolina has allowed just 93 yards rushing, the fewest in the NFL. The Panthers held RB Alvin Kamara to 5 yards rushing on eight carries. ... Carolina has an NFL-leading 10 sacks in three games, led by three from OLB Haason Reddick. ... Darnold has completed 68.5% of his passes for 584 yards with three TDs and one interception. ... Rookie CB Jaycee Horn had his first career interception against the Saints. ... Veteran CB A.J. Bouye is expected to return and play nickel back for the Panthers after missing the first two games serving a suspension. Bouye played four seasons for the Texans (2013-16). ... Houston RB Mark Ingram ran for a TD and caught a touchdown pass in his last Thursday night game in 2019 with Baltimore. ... RB Phillip Lindsay had a TD reception last week and is one of two players in the NFL this season with a rushing and receiving touchdown. ... LB Zach Cunningham’s 176 tackles since the start of last season are the most in the NFL. ... LB Christian Kirksey recovered a fumble last week and is one of three players in the league with an interception and fumble recovery this season. ... Reid had an interception and forced a fumble on Sunday and is tied for the NFL lead with two interceptions. ... LB Kamu Grugier-Hill led the Texans with a career-high nine tackles and had a sack and forced a fumble against Cleveland. ... LB Jacob Martin had his first sack this season against Cleveland.

FANTASY TIP: WR Brandin Cooks leads the Texans and ranks fifth in the NFL with 210 yards receiving. Cooks has three straight games with at least 75 yards receiving and has a TD reception in three of his last four games.