Titans can clinch AFC's No. 1 seed with Henry's return near 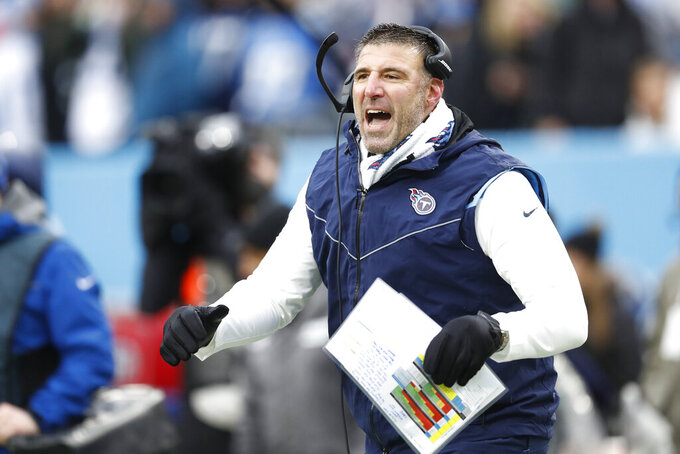 NASHVILLE, Tenn. (AP) — The resilient Tennessee Titans now are two-time AFC South champs and just one victory away from making the AFC playoffs come through Nashville.

So much for a season during which they've been without the league’s two-time rushing champ since Halloween and used 88 players, most ever for a non-strike season in the NFL.

The Titans (11-5) go to Houston on Sunday to wrap up a third straight season in their old hometown. This time, a Tennessee victory locks down the No. 1 seed in the AFC, something this franchise has done only twice previously since leaving Texas and not since 2008.

And they just might have Derrick Henry back for the playoffs. Titans coach Mike Vrabel said Monday they've been discussing when to open the 21-day practice window for Henry, who still ranks sixth in the NFL with his 937 yards rushing despite a broken right foot that put him on injured reserve Nov. 1.

“He’s doing some work today, and we’ll see when that window opens and probably make a decision mid-week,” Vrabel said.

Not only are the Titans healthier than they've been in weeks after having their bye Dec. 5, they have won three of four, including a 34-3 rout of Miami that clinched a second straight consecutive division title for the first time since this franchise won the Eastern Division the first three seasons in the AFL.

The Titans also are staying on message that they're nowhere near finished.

Winning the AFC South is just the first step for the Titans.

“That's our goal is to win championships,” Vrabel said. “It starts with winning the division. Guys were excited, they put a lot into it. I'm happy for them, but this is a huge week, this is another critical week."

The run game. The Titans insisted they wouldn't change their offensive approach without Henry, and they haven't. They've leaned on a committee approach with D'Onta Foreman, signed off the street Nov. 2, running for 100 yards or more three times. He had a career-high 132 yards against Miami.

The Titans have run for 985 yards over eight games since losing Henry, matching the 2020 NFL Offensive Player of the Year's 4.3-yard per carry average before his injury on Oct. 31.

The big difference? Henry's ability to finish drives. He scored 10 TDs in eight games, while the replacements have combined for six, along with four by Tannehill.

The Titans are first in the NFL scoring in goal-to-go situations, scoring on 86.2% of those situations. But they still have some issues finishing off drives. Against Miami, a fumble recovery put them at the Dolphins 14, and the Titans wound up settling for a field goal early in the second quarter.

Linebacker David Long. He started eight games before a hamstring injury sidelined him for six straight games. He returned after a week of practice and made the most of 34 snaps with an interception and four tackles.

Receiver A.J. Brown. After catching a career-high 11 passes in a win over the 49ers, Brown caught only two of the five passes Tannehill threw to him. He did finish with 41 yards with both catches converting first downs while covered by Xavien Howard.

Tight end MyCole Pruitt had surgery Monday for a gruesome right ankle injury that Vrabel said will keep him out an extended period of time.

3 — The number of consecutive playoff berths for the Titans, something this franchise has not done since their “Run and Shoot” days as the Houston Oilers between 1987 and 1993 when they reached seven straight postseasons.

The Titans will look to beat the Texans in Houston to clinch the No. 1 seed in the AFC along with a first-round bye and more time for Henry to work himself into football condition.