Von Miller returns this weekend for first game since 2019 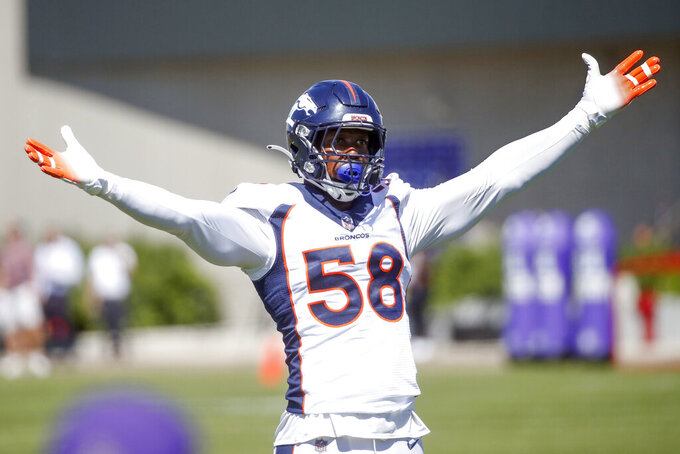 ENGLEWOOD, Colo. (AP) — Broncos coach Vic Fangio faced another difficult decision without a clear-cut answer after selecting his starting quarterback this week: Play Von Miller this weekend on grass or hold him out until the season opener on turf?

Fangio decided Miller will play at least a handful of snaps against the Rams on Saturday night, the star linebacker's first action since Dec. 29, 2019.

“I think they're in shape, they're ready to go, they just need to get some game action,” Fangio said Thursday.

Miller had been lobbying Fangio to let him play in the preseason finale to “sharpen the knife” rather than pushing back his return to Sept. 12, when the Broncos open the season against the Giants at the Meadowlands.

“It’s super exciting to be back in there” going through a week of game preparation, said Miller, who was held out of Denver's preseason games on turf at Minnesota and Seattle. "It’s a true dress rehearsal for me.”

Miller missed the 2020 season after dislodging a tendon in his left ankle at a practice on artificial grass that was moved indoors because of a freak snowstorm just six days before Denver's opener a year ago.

The Broncos' offseason was understandably dominated by their neck-and-neck quarterback competition before Fangio chose Teddy Bridgewater over Drew Lock on Wednesday.

Fangio's management of Miller's return, however, might prove just as consequential to Denver's hopes of ending a five-year playoff drought.

“We’re excited to see him play. He really wants to get out there,” defensive coordinator Ed Donatell said. “All his training’s right on point, he’s ready to go.”

Miller and pass rush partner Bradley Chubb haven't played together since Sept. 29, 2019, when Chubb blew out a knee that sidelined him until 2020, when he made his first Pro Bowl playing opposite Malik Reed.

During Chubb's rookie season in 2018, Miller and Chubb combined for 26½ sacks.

At age 32, Miller is entering the final season of the six-year, $114.5 million deal he signed in the aftermath of his Super Bowl 50 MVP exploits.

He said this summer he wants to play several more seasons, either in Denver or elsewhere, so his infant son can one day see him play.

The Broncos believe they finally have the roster to end their four-year skid of losing seasons but they're counting heavily on Miller to lead the way and they can ill afford to see him get hurt again.

Miller's predictions for a big Broncos season have become an annual rite of summer in Colorado, but this year feels different.

He's certain Denver finally has the roster like the one he led to a championship parade five years ago, heaping high praise on both the offense and defense.

Miller said his year away from action taught him to be patient and live in the moment, but he was inspired anew to chase greatness when he attended Peyton Manning's induction into the Pro Football Hall of Fame earlier this month.

Hanging with so many former teammates and coaches as Manning's guest "was like a football reunion for me,” Miller said. “It felt like we were in the locker room again."

“The ceremony itself is incredible, but that afterparty with Peyton and everybody else, Charles Woodson and those guys, it was definitely a moment of a lifetime."

Naturally, his weekend in Canton inspired Miller to ponder his own legacy and dream of ending up there himself some day.

“That’s everybody’s dream, but I’m still here working on my Hall of Fame resume right now," Miller said. “I want to make that resume as ironclad as I can. It is a tough group to get into. It’s only 346 guys that have been elected. It’s super, super tough to get into that elite group of people to get that golden jacket.”

He can just envision his own acceptance speech.

"I want that and I want it bad. You sit there and you listen to all these speeches. Of course, you think about it. I just reinvested in myself saying, ‘I have to make sure this happens. I have to leave no mistake on my career so I can get in.’ I still have a lot of time to do it.”

And he can't wait to get back at it.