Watson all by himself as Texans lose 36-7 to Bears 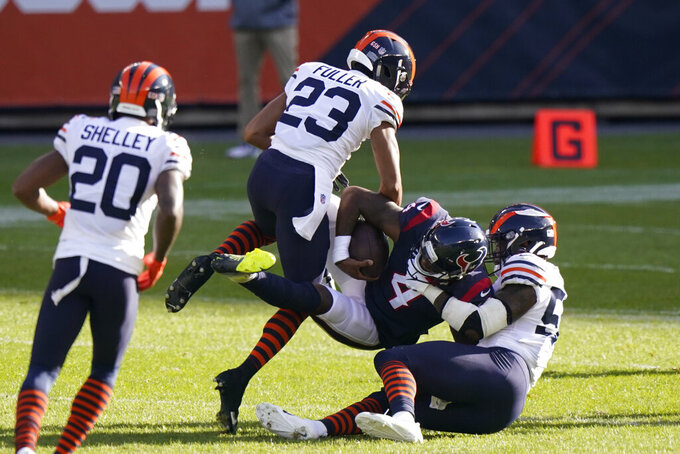 CHICAGO (AP) — No Brandin Cooks, Will Fuller or Randall Cobb. No David Johnson, either.

Deshaun Watson did everything he could for the Houston Texans, but it wasn't enough. Not nearly enough with Houston's defense stumbling through another awful performance.

Watson passed for 219 yards and a touchdown, but the Texans were shredded by Mitchell Trubisky and the Chicago Bears in a 36-7 loss on Sunday. The NFL's 30th-ranked defense coming into the weekend yielded 23 first downs and 410 yards to one of the league's worst offenses.

“The fact that we didn’t play with the kind of energy that we have been playing with, you know, that was disappointing,” coach Romeo Crennel said.

Watson was 21 for 30 in Houston's second straight loss, eliminating the Texans (4-9) from playoff contention. He also was the team's second-leading rusher with 38 yards on seven carries.

“Just trying to make something happen,” he said. “That's the only thing I can do, control what I can control, be the quarterback, try to get positive things going and try to flip it around, and it just didn't go our way.”

The 25-year-old Watson passed for at least 300 yards in his previous three games. But he was sacked seven times by Chicago (6-7), matching a career high, and the depleted Texans lost two fumbles for the game's only turnovers.

Playing without three key receivers was just too much to overcome, even for the dynamic Watson.

Cooks was inactive because of foot and neck injuries. Fuller is serving a suspension for violating the NFL’s policy on performance-enhancing drugs, and Cobb is on the injured list with a toe injury.

Houston also placed Johnson on the reserve/COVID-19 list on Friday because the running back came in close contact with someone who had contracted the coronavirus. Veteran receiver Kenny Stills was released last month after struggling in his second season with the Texans.

“It’s tough, but, you know, I can’t sit here and make any excuses,” Watson said. “I've just got to continue to control what I can control, go through my reads, try to bring those guys along with me and build that chemistry as fast as we can. That’s just how the NFL works.”

Watson threw his 25th touchdown pass of the season in the second quarter, using a pump fake to escape a potential sack before finding Keke Coutee for the 5-yard score. He nearly had a second TD pass in the third, but it looked as if wide-open tight end Jordan Akins lost the ball in the sun.

After Akins' drop on first-and-goal from the 3, Watson scrambled for an apparent touchdown, but he was ruled down at the 1 after a replay review. Watson then took a big hit from linebacker Roquan Smith on a third-down incompletion, sending him to the sideline after he was hit on the funny bone on his right arm, according to Crennel.

“We didn’t protect him well enough, so he took took some hits," Crennel said. “And we don’t like to see him take hits, but hits are part of the game.”

After AJ McCarron was sacked on fourth down, Watson played the rest of the afternoon even with the game long out of hand. Watson said there was no discussion about taking him out, and he didn't sound too interested in adjusting his playing time over the last part of the season.

Texans owner Cal McNair took in the loss from a box at Soldier Field, watching as Trubisky passed for 267 yards and three TDs for the Bears. McNair fired coach Bill O'Brien in October and elevated Crennel to the interim job.

Watson said he was approached by McNair to talk about the team's coaching search.

“They just put a lot of trust in me and what things he wants and what I want, and just as a whole, as an organization, where we want to go forward from here,” he said. “So we’ve got to make decisions and go from there.”