Off 1st loss, Cardinals look for season sweep against 49ers 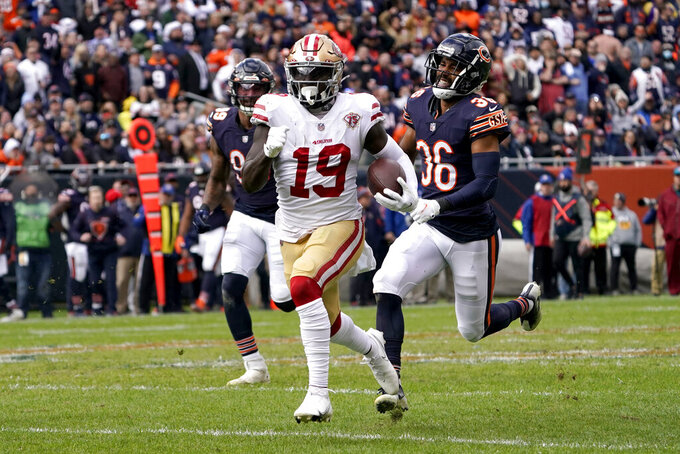 San Francisco 49ers wide receiver Deebo Samuel heads down the sideline past Chicago Bears linebacker Trevis Gipson (99) and defensive back DeAndre Houston-Carson for a big gain during the first half of an NFL football game Sunday, Oct. 31, 2021, in Chicago. (AP Photo/David Banks)

OPENING LINE: Cardinals by 2 1/2, according to FanDuel SportsBook.

TURNOVER DIFFERENTIAL: Cardinals plus-5; 49ers minus-5.

CARDINALS PLAYER TO WATCH: RB James Conner has eight rushing touchdowns this season and all of them have come in the past six games. He is second in the NFL in rushing touchdowns behind Tennessee’s Derrick Henry, who has 10 but now is injured.

49ERS PLAYER TO WATCH: WR Deebo Samuel. Samuel had his third game with at least 150 yards receiving this season, with six catches for 171 yards last week. Samuel’s 819 yards receiving are the most for a 49ers receiver through seven games, breaking Jerry Rice’s record of 781 in 1986. He also has the eighth most of any player in the Super Bowl era, and 46% of the team’s receiving yards, the highest rate by any player through seven games since Roddy White in 2008 (47.1%).

KEY MATCHUP: Cardinals edge rusher DE Chandler Jones vs. 49ers LT Trent Williams. Jones and Williams have been among the best at their jobs for nearly a decade with Jones leading the NFL with 102 sacks since entering the league in 2012 and Williams making the Pro Bowl the last eight seasons he has played.

KEY INJURIES: Arizona QB Kyler Murray's status is uncertain with an ankle injury; Colt McCoy is the backup. ... Cardinals DL J.J. Watt is sidelined with a shoulder injury after dominating the first meeting between the teams. ... WR DeAndre Hopkins (hamstring) is day to day. ... C Rodney Hudson (ribs) has been designated to return from injured reserve. ... Niners TE George Kittle and K Robbie Gould are expected to return from IR to play this week. ... DE Dee Ford and LB Azeez Al-Shaair are expected back from concussions. ... S Jimmie Ward (quadriceps) is expected to miss the game with San Francisco's other starting safety Jaquiski Tartt already on IR with a knee injury.

SERIES NOTES: The Cardinals are looking for their first series sweep since doing it four years in a row from 2015-18. ... Arizona has won five of the past six road games in the series. ... Murray has six TD passes, two INTs and two TD runs in five career games vs. the 49ers. ... 49ers QB Jimmy Garoppolo has had a passer rating of at least 100 in all four starts against the Cardinals but missed the first meeting with a calf injury.

STATS AND STUFF: Arizona is the only team in the NFL with a 100% success rate on fourth downs, converting on all seven attempts. ... Arizona and the Bills are the only two NFL teams who rank in the league’s top five in both scoring offense and scoring defense. The Cardinals are scoring 30.8 points per game and giving up 17.3. ... The Cardinals are 4-0 on the road this season, beating the Titans, Rams, Jaguars and Browns. ... The Cardinals have 27 plays this season that have gained at least 25 yards, which is tops in the NFL. ... Hopkins has seven TD catches, which is already more than last season’s six TDs. ... Murray is completing 72.7% of his passes, which ranks second in the league.... The 49ers snapped a four-game losing streak last week. ... San Francisco is 1-7 at Levi's Stadium the past two seasons with the last win coming more than a year ago against the Rams on Oct. 18, 2020. ... The Niners had eight plays gain at least 20 yards last week for their most in a game since 2019. ... San Francisco was the ninth team since the merger to have no punts, turnovers or sacks allowed in a game last week in Chicago. ... The 49ers had a 300-yard passer (Garoppolo), a 100-yard rusher (Elijah Mitchell) and a 100-yard receiver (Samuel) in the same game for the fourth time since 2000. That trio also did it in Week 1 at Detroit. ... Garoppolo had the fifth game in 49ers history with at least 300 yards passing and two TD runs. ... Niners DE Nick Bosa had his fourth career two-sack game last week.

FANTASY TIP: Rookie RB Mitchell has topped the 100-yard rushing mark in three of his five career games after gaining a career-high 137 yards and a TD last week. The sixth-round draft pick is the only back in the NFC with three 100-yard games this season and the first player to do that in his first five career games since Kareem Hunt in 2017.