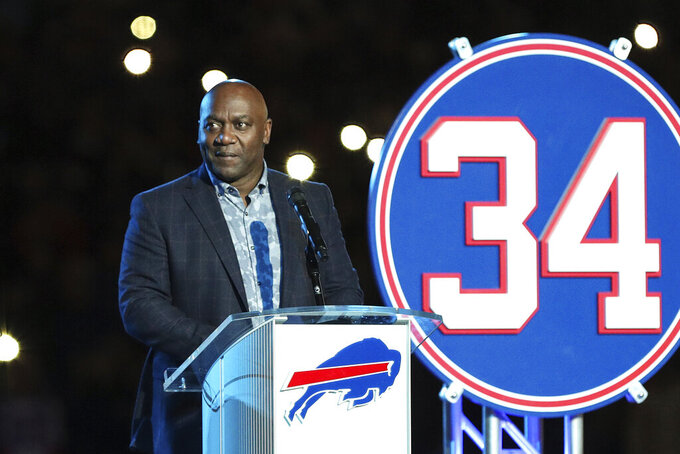 FILE - Buffalo Bills Hall of Fame running back Thurman Thomas speaks during halftime of an NFL football game between New England Patriots and Buffalo Bills in Orchard Park, N.Y., Oct. 29, 2018. Thurman Thomas tells The Associated Press he and several former teammates are coming together in Buffalo this week to help support families of the shooting victimsWLD (AP Photo/Chris Cecere)

BUFFALO, N.Y. (AP) — Bills Hall of Fame running back Thurman Thomas tells The Associated Press he and several former teammates are coming together in Buffalo this week to help support families of the shooting victims.

Among those players expected to make the trip are Hall of Famers defensive end Bruce Smith and receiver Andre Reed, along with Thomas and Hall of Fame quarterback Jim Kelly, who like Thomas lives in the area.

“Those guys said right away, `We’ll be here this week because that’s our city. We love it and we want to be supportive,‘” Thomas said. “They want to see what they can do and how they can help, because they were really a part of this community for a number of years and they want to continue to help.”

The four Hall of Famers were key members of the Buffalo teams that won four straight AFC championships, though they lost in the Super Bowl each year.

Thomas and his wife, Patti, said their family foundation has raised more than $100,000 to help the city and its residents in the aftermath of the shooting.

“I’m a little emotional right now. Really, I am,” Thomas said at a news conference with city officials Monday. “I’m hurting for the city that I love. I’m hurting for the people on the east side, their families, our friends and our community. You read about stuff happening in other states, but when it’s right here at home, it’s tough. It really is tough and this is a time that we need to come together.”

Ten people were killed in the shooting spree.