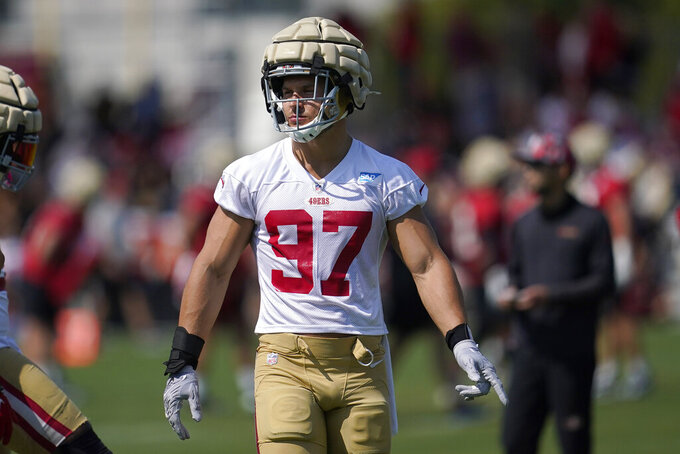 SANTA CLARA, Calif. (AP) — Here's a scary thought for NFL tackles and quarterbacks: After spending his offseason honing his pass rushing moves instead of rehabilitating a knee injury could be even more difficult to deal with this year than he was in a dominant 2021 season.

Back home in South Florida, Bosa worked out with his brother Joey, just two star ends refining how best to get after the quarterback.

It's a far cry from 2021 when Nick Bosa spent the offseason working his way back from knee surgery and wasn't even able to get back on the practice field until just before the start of the season.

Bosa already looks to be in dominant form.

“He’s one of the best I’ve ever seen,” defensive coordinator DeMeco Ryans said. “Just the way he works and the way he shows up and makes plays, he makes it look easy. I know it’s not easy. There’s a lot of work that goes in, day after day after day of hard work and effort that he puts in. You see the fruit of his labor when he’s away. He shows up, he’s going to be ready to go."

Already, Bosa has won the Defensive Rookie of the Year award in 2019 when he had nine sacks in the regular season and four more in a playoff run that ended in a Super Bowl loss to Kansas City.

Bosa then blew out his knee in Week 2 in 2020 but picked up where he left off when he returned healthy in 2021, recording 15 1/2 sacks in the regular season and four more in the playoffs despite getting little on-field work in the offseason.

That has raised expectations even more.

After lining up almost predominantly on the right side as a rookie to accommodate Dee Ford's preference to rush from the left, Bosa moved around more last season and will continue as line coach Kris Kocurek has given Bosa more freedom.

Bosa said he plans to flip back and forth throughout camp to become equally proficient and comfortable on both sides to make it more difficult for offenses to scheme against him.

“Sometimes I get fixated on one side and then I go over to the other side and I feel a little awkward," he said. "So I’m making it a thing that I’m switching every period no matter what, getting equal work.”

It also gives Bosa the opportunity in camp to work against several different tackles and work on his full complement of pass-rush moves instead of repeatedly going up against All-Pro Trent Williams.

A big year from Bosa will only raise the price tag that San Francisco will have to pay to keep Bosa when his rookie deal expires following the 2023 season. General manager John Lynch said at the start of camp that the team is in no rush to extend him now, preferring to wait until next offseason when he is entering his final year.

“You never say never,” Lynch said about an early extension. “But here’s what I do know: As long as we’re here, Nick Bosa is going to be a part of the Niners and he’s going to get paid handsomely to do so.”

NOTES: DT Maurice Hurst tore his biceps in practice Friday and will likely miss the entire season. ... DT Hassan Ridgeway (quadriceps) will be sidelined a couple of weeks. ... WR Deebo Samuel remains out of practice as he works on getting a new contract. “I know they're grinding through it,” coach Kyle Shanahan said. “Nothing has been done yet but I know they're working through it.”