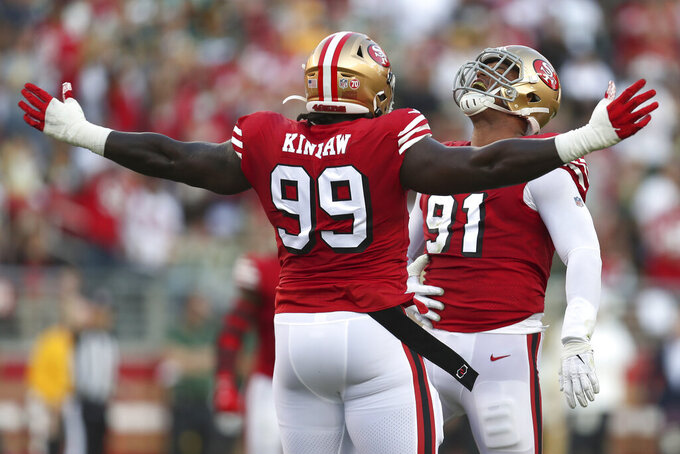 Kinlaw hurt his knee in December in Dallas and missed the final two games of the season. He underwent surgery in the offseason but never completely healed.

He was slowed by the injury in training camp and managed to play four games before being sidelined again. Now he's out until next season after general manager John Lynch, doctors and Kinlaw decided on another operation.

“I think the good news is they feel they solved the problem,” coach Kyle Shanahan said Friday. "Obviously, it hurts, him not going to be with us this year. But just talking to the doctor and not me personally, but John and our doctors talking to him. They feel, he feels that he found the issue and he thinks that’ll be good news for us next year.”

Kinlaw was drafted 14th overall to replace DeForest Buckner. He has 33 tackles, 3 tackles for loss and 1 1/2 sacks in 18 career games.

The Niners did get some good news on the injury front with rookie quarterback Trey Lance back from a knee injury that sidelined him last week. Lance has no injury designation and could be used in a situational role behind starter Jimmy Garoppolo on Sunday in Chicago.

“I thought he got better each day," Shanahan said of Lance. "It was his first day out there Wednesday. We gave him some limited reps but he felt good on Thursday and we pushed him even harder on Thursday. Coming into day, just talking to him, he didn’t have any setbacks and so, I feel good to go with him.”

San Francisco also is hoping to get back left tackle Trent Williams after his missed last week's game with an ankle injury.

Williams practiced on a limited basis Friday and is questionable for the game.

“The fact that he was out there was a good sign,” Shanahan said. "He wasn’t able to do it last week. Again, we just do stuff half speed, so he’s not challenged a ton on it. But he was moving around and able to do it. We’ll get on this flight and we’ll see how it reacts tomorrow. Hopefully it continues to get better and it doesn’t get worse.”

NOTES: DL Maurice Hurst (calf) and S Jaquiski Tartt (knee) also are out for Sunday. ... LB Azeez Al-Shaair and DE Dee Ford are doubtful with concussions. ... DL Samson Ebukam (ankle) is questionable. ... DL Jordan Willis could be activated to play Sunday after missing the first six games with a suspension.