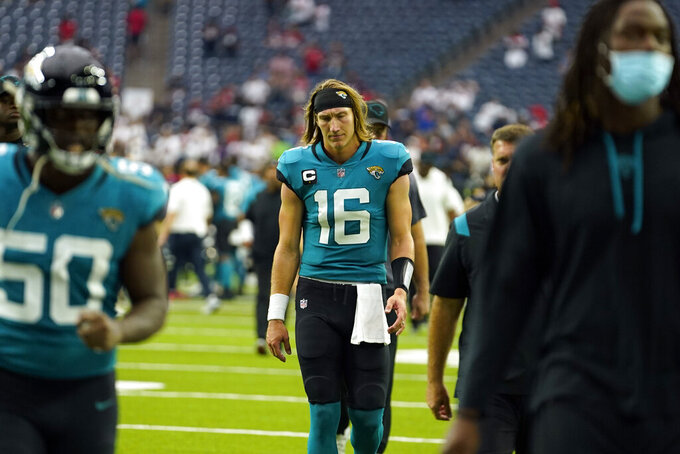 JACKSONVILLE, Fla. (AP) — Urban Meyer expected some jitters from his young team, even a few mistakes. After all, Meyer and the Jacksonville Jaguars were on the road with a rookie quarterback to start the franchise’s latest rebuild.

What Meyer got was closer to a meltdown.

The Jaguars looked downright unprepared in their season opener, a 37-21 loss at Houston that wasn’t nearly as close as the final score might indicate.

“We’ve all got our (butt) kicked before,” Meyer said, insisting his team will play better next Sunday against Denver, which beat the Giants.

It was Meyer’s first loss in a season opener as a head coach – he had been 17-0 during stops at Bowling Green, Utah, Florida and Ohio State – and the first time he lost his debut with a new team.

This one will be remembered for Jacksonville’s self-inflicted issues: four holding penalties and four pre-snap procedure penalties. Throw in Trevor Lawrence’s three interceptions and the Jaguars didn’t have a chance.

“It obviously sucks,” Lawrence said. “Losing’s always hard, especially when you feel like you’re prepared and had a great week and really think we were ready. Just obviously didn’t play well. It starts with me. I played really bad. Disappointing for sure. …

“We’ve got to watch it and learn from it, for sure, but then flip the page. It’s a long season. We can’t let this snowball. We’ve got to move on and go win next week.”

The first three-interception game of Trevor Lawrence’s life included a few bright spots, and for a floundering franchise that spent two decades searching for a quarterback, that’s a positive. Lawrence’s first career touchdown pass came on a perfect read and throw down the seam to tight end Chris Manhertz. Lawrence later threw a 41-yard strike down the sideline to DJ Chark for a score. The No. 1 overall pick ended up completing 28 of 51 passes for 332 yards in his NFL debut, with three TDs and three picks. It wasn’t great, but the Jaguars feel like it’s something they can build on going forward.

Jacksonville’s revamped defense looked about the same as last year’s season-long debacle. The Jags gave up 449 yards, generated little pass rush (one sack) and couldn’t get off the field on third downs (Texans converted 57%). The performance probably should have been expected considering Meyer used three of his first four draft picks on offensive players and took a “value” approach in free agency that yielded several second-tier starters, including cornerback Shaquill Griffin, safety Rayshawn Jenkins, linebacker Damien Wilson and defensive lineman Roy Robertson-Harris. Meyer also went with first-time NFL defensive coordinator Joe Cullen. The unit could get better, but it seems unlikely to become a star-studded group capable of winning many games.

Tight end James O’Shaughnessy had a career-high six receptions for 48 yards. He didn’t do anything flashy, but the seventh-year pro was steady at a position that appeared to be a weak spot heading into the season.

Chark dropped two passes and was flagged for illegal formation, hardly an ideal start for a guy entering the final year of his rookie contract. Chark caught three passes for 86 yards, including a 41-yard score late in the third quarter of a lopsided game. But he was targeted a team-high 12 times. In fairness, it was Chark’s first live action since breaking a finger early in training camp and requiring surgery.

Cornerback Tre Herndon (knee) was ruled out early last week and likely will miss another game. His absence forced the Jags to go with second-year pro CJ Henderson in the starting lineup and rookie Tyson Campbell as their nickel cornerback.

365 – number of days since Jacksonville’s last win. The Jaguars opened the 2020 season with a home victory against Indianapolis and then dropped 15 in a row. The franchise-record skid now stands at 16 heading into the Week 2 game against Denver.

Find some offensive identity and balance. Meyer said repeatedly over the last eight months that he wants to be able to run the ball, but Jacksonville hardly tried in Houston. James Robinson carried just four times for 22 yards in the first half as Jacksonville opened five of six drives with passes.