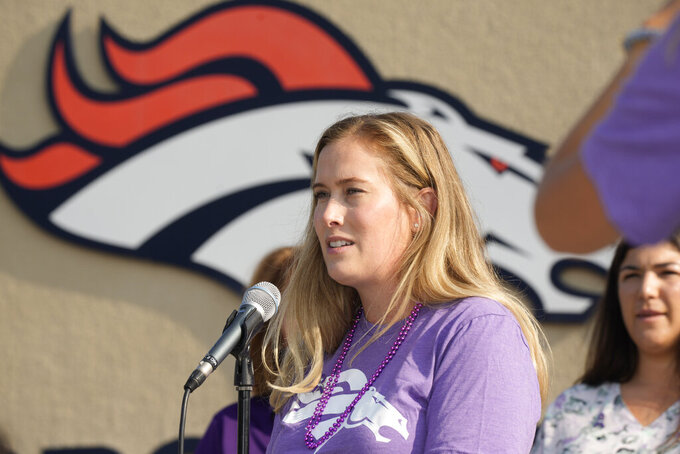 Brittany Bowlen speaks during a news conference to raise awareness of Alzheimer's disease outside the Denver Broncos' headquarters Wednesday, Aug. 18, 2021, in Englewood, Colo. Both Pat Bowlen, the deceased owner of the Broncos, and now his wife, Annabelle, have dealt with the disease. (AP Photo/David Zalubowski)

“Obviously it's touched this organization in a deep way with the Bowlen family ... ” coach Vic Fangio said. “You know, it's a terrible disease and anything we can do to raise money to help cure this thing would be good.”

Late owner Pat Bowlen stepped away from running the team in 2014 because of Alzheimer's and died in 2019 one month shy of his induction into the Pro Football Hall of Fame.

His widow, Annabel Bowlen, was diagnosed several years ago with the same brain disorder that afflicts more than 6 million Americans and slowly destroys memory and thinking skills, and, eventually, the ability to carry out the simplest tasks.

“It's really hard. I mean, any family that has to go through this, it's hard,” said Brittany Bowlen, the Broncos' senior vice president of strategy. "And in many cases, it's a 10-year process and you lose someone mentally and then you have to lose them physically. So, it's almost like experiencing two deaths.

Brittany Bowlen helped present the Alzheimer's Association with a $50,000 check from the team and stadium sponsor Empower Retirement before practice.

The Broncos put up a tent in the crowd and encouraged fans to write notes to local caregivers, register for the annual Walk to End Alzheimer’s on Sept. 18 and make monetary donations to find a cure.

Last year's Alzheimer's Awareness Day was held virtually because of the pandemic and “that’s why this year we’ve decided to do a little bit more around caregivers,” Brittany Bowlen said. "We’re asking our fans and the community to write stories and reflections and thank you cards to caregivers because many caregivers were incredibly isolated with their Alzheimer’s patients.

"And if you know what it’s like to talk to an Alzheimer’s patient, it’s sometimes like having the same conversation all day, which is a real mental strain for somebody who’s (doing) round-the-clock care. So, yeah, it’s great to be back out here. I’m incredibly thankful for the caregivers that are a part of my family ... I don’t know where we would be without them.

“And that’s why I’m here today because I know the community that is surrounding our family and has allowed us to get through this disease twice they deserve attention, they deserve love and they deserve fundraising so that we can find a cure one day and get them out of a job.”

Asked how her mother was doing, Brittany Bowlen paused for several seconds.

“You know, my mom's doing great,” she said. "That's a hard question to answer, and sometimes I like to tell people maybe instead of asking that you ask or say, ‘I’m thinking about your loved one and I know it's not easy,' and share a personal experience about what you've gone through, whether it be someone with cancer or with another ailment because you know there's good days and there's bad days.

“And when you ask someone that question, you don't know if you're going to catch them on a good day or a bad day. So, I think that the best way to answer that is she's doing great. She's an incredibly strong human and I have an immense level of respect for her.”

Brittany Bowlen said the family's involvement in raising funds for the Alzheimer's Association doesn't mitigate the pain of having two parents suffer the same fate.

“But, it's our responsibility,” Brittany Bowlen said. “My dad always said that the Broncos are a platform and they have a strong legacy in this community."

Brittany Bowlen declined to discuss the Broncos' ownership situation. Team president and CEO Joe Ellis said last month that the trust that runs the franchise will begin a transition in early 2022 and the new owner will be in place by the start of next season.

Ellis is one of three trustees of the franchise valued at $3.75 billion. The trust could approve one of Bowlen’s children to become the team’s next controlling owner — Brittany Bowlen, 31, is the preferred choice — or sell the team altogether.

Arapahoe County District Judge John E. Scipione granted a motion last month to dismiss a lawsuit filed by two of the late owner’s daughters from his first marriage. All sides in the dispute are prohibited from discussing the matter.

Amie Bowlen Klemmer and Beth Bowlen Wallace had alleged their father was already affected by Alzheimer’s and was subject to “undue influence” in setting up the three-person trust that has run the team for seven years.

The judge’s order means the trust retains the power to decide the franchise’s future.

“I'm here today to talk about Alzheimer's,” Brittany Bowlen said when asked about these developments.