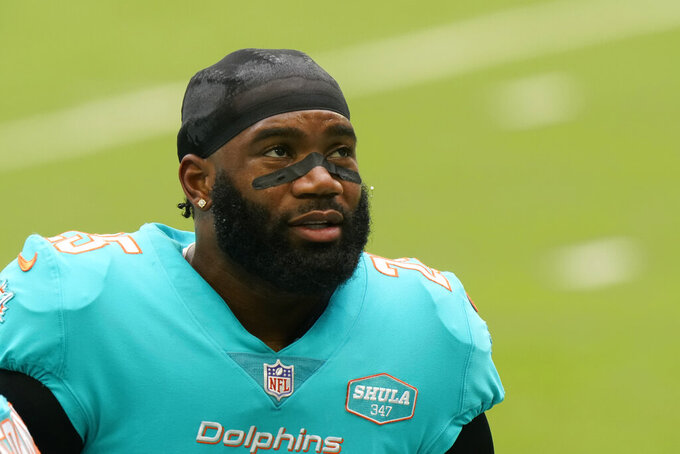 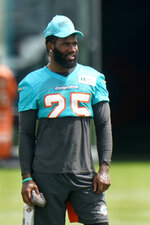 MIAMI GARDENS, Fla. (AP) — All-Pro cornerback Xavien Howard agreed to a restructured contract with the Miami Dolphins 12 days after he had requested a trade.

The agreement allows Howard to earn up to $3.5 million in new incentives this year, with more guaranteed money in 2022. The sixth-year pro said he's glad to be staying in Miami.

“I was always happy to be here and be with the team that drafted me and sticking through it, ups and downs,” Howard said Sunday.

Coach Brian Flores said there was never real concern the situation with Howard wouldn’t get resolved.

“We want him here, and he’s here,” Flores said.

Howard's agent, David Canter, thanked the Dolphins for “doing something unexpected and difficult to say the least.”

“Many times over the past eight months we all did not expect anything to happen,” Canter said on Twitter. “The organization handled us with absolute class and professionalism.”

The Dolphins restructured a contract Howard signed in May 2019 that was then worth $75.25 million over five years.

“David Canter hit me up and told me we got a good deal, and we got the job done,” Howard said.

Howard had 10 interceptions last year, the most in the NFL since 2007. He has been limited in training camp because of an ankle injury.

During negotiations, Flores had said the Dolphins did not want to trade Howard.

“In any negotiation, compromise is important,” Flores said. “We want all sides to be happy. We feel like that’s the case right now, and that’s how we’ll move forward.”

NOTES: Third-round draft pick Hunter Long was carted off the field after he sustained a left leg injury during practice. The tight end from Boston College was injured during a two-minute drill after catching a pass from Jacoby Brissett on a crossing pattern. After getting close to the sideline, Long got tangled with defensive back Nate Holley and ended up on the ground. After being examined by trainers on the field, he was placed on a cart without him putting any weight on his left leg. ... The Dolphins already are without tight end Mike Gesicki, out since going on the Reserve/COVID-19 list Aug. 1. They have five other tight ends on the roster: Durham Smythe, Adam Shaheen, Cethan Carter, Chris Myarick and Carson Meier.