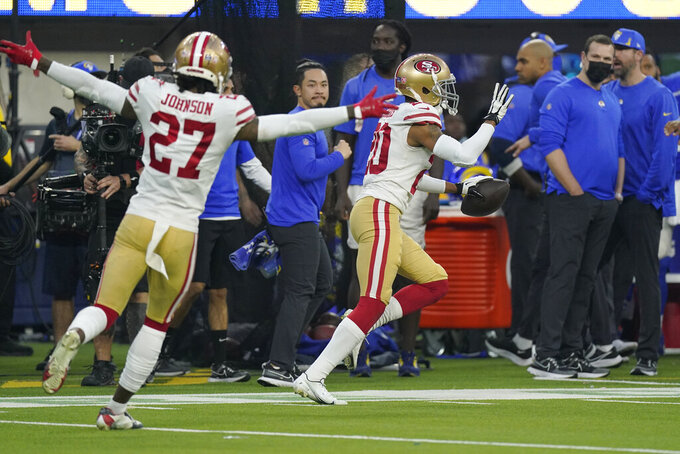 SANTA CLARA, Calif. (AP) — Ambry Thomas' rookie regular season for the San Francisco 49ers got off to a rough start but couldn't have had a much better finish.

The third-round cornerback out of Michigan went from an overmatched rookie who seemed like he needed time to adjust to the rigors to making the interception that sealed a Week 18 overtime win over the Rams and sent the 49ers to the playoffs.

“He’s definitely made a believer out of me the second half of this season," coach Kyle Shanahan said. "I wouldn’t have believed it the way it started off. It sounds harsh. But it took time. When he got his opportunity, he was ready and showed what’s in him. He’s shown us he’s someone we can count on and he’ll get better.”

The Niners drafted Thomas 102nd overall even though he opted out of his final season at Michigan because of COVID-19 concerns.

He struggled out of the gate in training camp as he lacked the strength to compete against NFL players.

Thomas was forced into action in the opener at Detroit because of injuries and allowed three catches on three targets and didn't get another snap on defense for 10 more weeks as he was a healthy scratch five times and otherwise relegated to special teams duty.

"It was pretty challenging just to be inactive all those games and still have to keep my mind on football and watch my guys play on Sundays and I’m not,” Thomas said. “It just made me work harder every time we practiced. So, I’m grateful for that honestly, because that brought me up.”

Thomas got his chance when he started for the banged-up Niners in Week 14 at Cincinnati. He showed promising signs that game, and even his two penalties impressed Shanahan because it showed he was capable of being more physical than he was when he first arrived in the NFL.

Thomas has gotten better each week since and will likely be called on to play a big role on Sunday when the Niners are matched up against Dallas' talented receiving trio of Amari Cooper, CeeDee Lamb and Cedrick Wilson.

When that happens, Thomas will have put the interception he made against Matthew Stafford that got the Niners in this position in the past because he knows he will be judged by how he does this game.

“People don’t know cornerback is a very tough position," he said. "You have a good play, bad play, next play, no matter what it is. You need a short memory. Everybody wants to talk corners, but when the ball is in the air, that’s the only man you see. My hat’s off to cornerbacks that play at a high level.”

The play in the secondary has been an issue all season for the Niners, who lost top cornerback Jason Verrett to a season-ending knee injury in the opener.

Emmanuel Moseley has missed six games with injuries and the performance from players like Josh Norman, Dontae Johnson and rookie Deommodore Lenoir has been spotty at best as the Niners have been susceptible to the deep ball and pass interference.

San Francisco has been flagged a league-worst 23 times for pass interference, with the 20 accepted penalties costing them 367 yards.

Thomas has been one of the few to avoid a pass interference call.

“It was a big emphasis," Thomas said. "After the Green Bay game, we noticed guys throw the ball up and hope for PI or for the guy to come down with the ball. We always work in practice on getting the ball.”