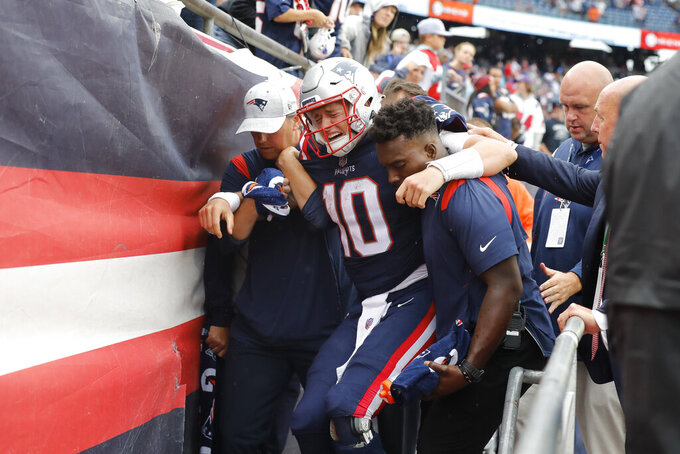 New England Patriots quarterback Mac Jones (10) is helped off the field after suffering a leg injury with less than two minutes to play in the second half of an NFL football game against the Baltimore Ravens, Sunday, Sept. 25, 2022, in Foxborough, Mass. (AP Photo/Michael Dwyer) 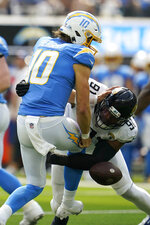 The NFL’s quarterback carousel may start spinning a bit faster.

Jones’ leg injury appears most serious. The second-year pro hopped off the field late in the fourth quarter of New England’s 37-26 loss to Baltimore, and he appeared to be in extreme pain in photos showing him being assisted to the locker room.

Veteran Brian Hoyer would take over for the Patriots (1-2) if Jones is sidelined. They visit the Green Bay Packers (2-1) this week, a difficult opponent regardless who is under center.

“I think we’ve always talked about it my whole time here, it’s always the next-man-up mentality if it comes to that,” Patriots defensive back Devin McCourty said.

Teddy Bridgewater was the next man for the Dolphins when Tagovailoa stumbled off the field late in the first half of Miami’s 21-19 win over Buffalo after hitting his head on the ground. Bridgewater was in for three plays because Tagovailoa passed concussion protocol and retuned to the game in the third quarter. He explained his legs were wobbly following the play because he hurt his back.

Tagovailoa wore a wrap around his back after the game and his status for Thursday night’s game at Cincinnati is uncertain.

“It’s a quick turnaround so you have to move on quick and get ready for Cincinnati,” Tagovailoa said. “For me, I’m just worried about getting my back right. Right now, it’s tight. It was sore when it did happen, but any competitor that would have never wanted to come out would’ve done the same thing. I just tried my hardest to get back up and get the next play and run it.”

If Tagovailoa can’t go for the Dolphins (3-0), they have a capable backup. Bridgewater is 33-30 in his career as a starter with the Vikings, Saints, Panthers and Broncos.

Allen needed an X-ray after the game on his right hand, but didn’t have any protection on it afterward and insisted he’s fine. The Bills (2-1) visit the Ravens this week. They have veteran Case Keenum, though Allen should be ready to go.

Playing with fractured rib cartilage, Herbert struggled as the Chargers were routed by the Jaguars 38-10 in Los Angeles. Coach Brandon Staley allowed Herbert to finish the game and throw 45 passes despite the lopsided score.

The Chargers (1-2) play at Houston this week and there’s no reason to think Herbert wouldn’t start.

Winston played his second straight game for the Saints with a back injury. He threw for 353 yards, but also tossed two interceptions in a 22-14 loss at Carolina. New Orleans (1-2) meets Minnesota in London next Sunday. Saints coach Dennis Allen said he’s not considering replacing Winston with Andy Dalton.

“He is a battler. He is tough. Yeah, he is fighting through some things, and that is part of playing pro football,” Allen said of Winston.

One QB switch that’s certain to happen is in New York. The Jets will turn to Zach Wilson once he’s cleared to return from a preseason knee injury. They’re 1-2 with Joe Flacco. Wilson is expected back against Pittsburgh on Sunday.

The 49ers lost their first full game without Lance, who went down with a season-ending ankle injury in Week 2. Jimmy Garoppolo, who filled in nicely after Lance got hurt in the first quarter of a 27-7 win over Seattle, threw a pick in an 11-10 loss at Denver on Sunday night.

The Cowboys will seek their second consecutive win with Cooper Rush when they play at the New York Giants on Monday night. Prescott fractured a bone near his right thumb in a season-opening loss to Tampa Bay. He could return in a week or two.

Backup quarterbacks are always one play away from entering the game. They have to be prepared.