Analysis: Even his contemporaries are ribbing Russell Wilson 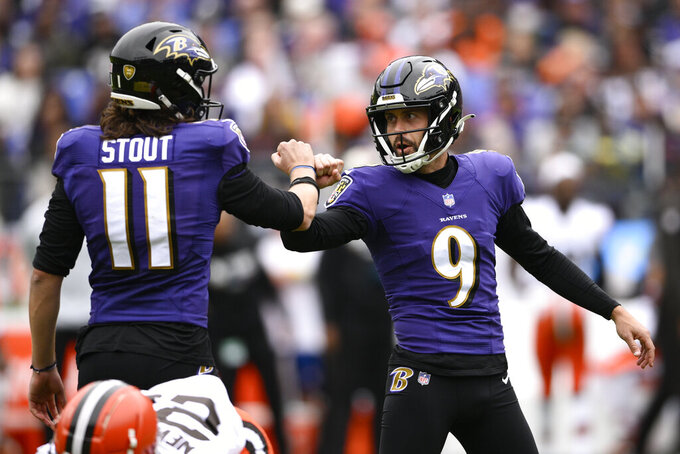 Baltimore Ravens place kicker Justin Tucker (9) celebrates with holder Jordan Stout (11) after kicking a field goal in the first half of an NFL football game against the Cleveland Browns, Sunday, Oct. 23, 2022, in Baltimore. (AP Photo/Nick Wass) 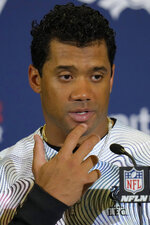 DENVER (AP) — Those who watch football for a living or for fun have been quick to rip Russell Wilson over his many cringe-worthy games, commercials, catch phrase deliveries and podium performances this season.

Now, even his opponents are clowning the quarterback whose Denver Broncos are off to a 3-5 start just like Tom Brady's Buccaneers and Aaron Rodgers' Packers.

The Baltimore Ravens kicked off Week 8 with a come-from-behind 27-22 win over Brady and the struggling Buccaneers on Thursday night and on the flight home, cornerback Marlon Humphrey busted out his phone for an Instagram livestream.

When he panned to Justin Tucker, the kicker said, “I heard Lamar (Jackson's) leading us in high knees: Ravens flock, let's fly!”

Those potshots stemmed from Wilson telling reporters that he did high knees up and down the aisle while his teammates slept on their trans-Atlantic flight to London last week and Tucker's twist on Wilson's “ Let's Ride ” tagline the Broncos' new $245 milion QB had doggedly clung to even as his poor play continued and the losses, whispers — and yells — began piling up.

Someone else on the Ravens' plane bellowed, “Un-LIM-i-ted!” ribbing Wilson over his notorious “ Mr. Unlimited ” video.

About the only thing missing from the miles-high hilarity was a send-up of Wilson's cringy Subway commericals.

“But we've got to play him,” Tucker quickly added. “We respect him. We like him.”

The Ravens host the Broncos on Dec. 4.

This piling on Wilson began in earnest with Richard Sherman relishing in his former teammate's horrible homecoming when the Broncos opened the season with a 17-16 loss at Seattle a few weeks after Keenan Allen joked about Wilson's “ Broncos Country, Let's Ride ” tagline that fans in Denver would quickly turn into “Broncos Country, Let's Hide.”

Sherman continued the bashing after the Broncos' 12-9 loss to Indianapolis on the “Thursday Night Football” postgame show a month ago after Wilson was picked off in the end zone on a play in which the situation — and Sherman — screamed for a run.

It was so reminiscent of Super Bowl 49 when Malcolm Butler's goal line interception of Wilson preserved New England's 28-24 win over the Seahawks that Sherman said he wished Marshawn Lynch was there with him to discuss the situation.

Hall of Famers Troy Aikman and Kurt Warner have chimed in on Wilson's obdurate struggles. Warner's brutal 40-minute video breaking down Denver's multitude of problems followed Sherman's diatribe and placed the bulk of the blame for the Broncos' lurching offense on the QB.

“You're not going to see many wins playing like this,” warned Warner.

Wilson followed up with a similarly bad game — and Broncos rookie head coach Nathaniel Hackett followed up with an equally headscratching carbon copy of a game plan — in a 19-16 overtime loss to the Chargers 11 days later.

Wilson's strained hamstring kept him out of a 16-9 loss to the Jets in which backup Brett Rypien looked a lot like Russell, missing open targets with both his arm and his eyes.

That hamstring, which forced him to miss just the fourth game of his 11-year career, was why Wilson said he spent most of the flight to London on his feet.

The globe-trotting Wilson said he's immune from jet lag because he flies so much — on his private plan on his own time — that he's learned to avoid the consequences of long flights.

“That was good. Then the last two hours, I fell asleep for one hour and then I watched film the rest,” Wilson said, adding that he stretches on flights “when I need to. Especially on the longer flights, the more you move, the better you feel when you get off of it. I have my secrets; I have my movements and tons of water always helps.”

Hackett, who's been no stranger to the guff in his first crack at head coaching and who received a vote of confidence from his general manager last week, said he thinks Wilson is genuintely unbothered by the piling on.

“I mean, he’s an amazing human being from that standpoint," Hackett said. "Everybody says what they want. They say whatever they want. That’s part of this game. It comes with the territory.

“As a head coach, as a quarterback, you’re always going to get that, especially if you don’t win, especially if the offense doesn’t look good, like it hasn’t. I think for us we just band together, we put our heads down, and try to find a way to win and help this team any way that we can.”