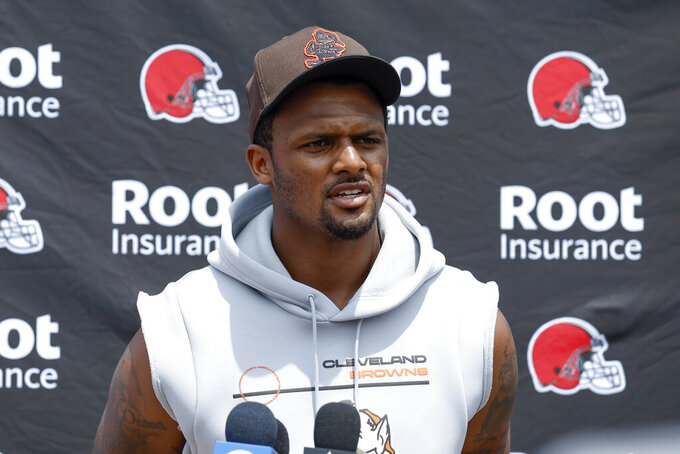 Now that Deshaun Watson’s disciplinary hearing has concluded, the best solution for the NFL and the quarterback’s legal team is to reach a settlement before retired judge Sue Robinson issues a decision.

Watson was accused of sexual misconduct by 24 women and has settled 20 of the civil lawsuits. Two separate Texas grand juries declined to indict Watson on criminal complaints stemming from the allegations.

A settlement between the NFL and Watson would avoid an appeal that undermines the collectively bargained process with a disciplinary officer and prevents a potential federal court case. The longer the process drags on, the uglier it can get for the league and the QB.

The NFL is insisting on a suspension of at least one year and Watson’s team has argued there is no basis for that punishment, four people with knowledge of the case, including two who were present during the hearings, told The Associated Press on condition of anonymity because details of the three-day proceedings were not publicly released.

Holding firm leaves little wiggle room for a settlement agreement and both sides are sticking to their strong positions.

Robinson, a former U.S. District Judge who was jointly appointed by the league and the NFL Players’ Association, will decide whether Watson violated the NFL’s personal conduct policy and whether to impose discipline — and most importantly, how severe. Both sides believe she will impose a suspension. The question is how many games and whether either side would appeal her decision, putting it back in NFL Commissioner Roger Goodell’s hands.

When a person familiar with Watson’s defense team was asked what would be an acceptable suspension, the person told the AP: “Our goal is to get him back on the field this year.”

A 6-8 game suspension would fulfill that goal and allow Watson to play for the Cleveland Browns in 2022. So would 10 games, for that matter.

But then the next question is what’s acceptable for the NFL. The league is well aware of public perception. Fallout from its decision in the Ray Rice case in 2014 (in which the league increased its suspension only after video of Rice hitting his fiance emerged) led the NFL to vow it would levy harsher penalties in cases involving violence and sexual assault against women.

A person familiar with the hearing told the AP the league believes it presented sufficient evidence to warrant keeping Watson off the field this season. The person said the league’s investigation determined Watson committed multiple violations of the personal conduct policy.

If Robinson doesn’t impose a suspension suitable to the NFL, the league still has the power to do so on its own. Per terms of Article 46 in the collective bargaining agreement, Goodell or his designee “will issue a written decision that will constitute full, final and complete disposition of the dispute,” if either side appeals.

However, Watson’s team could try to challenge a Goodell ruling in federal court.

That’s another reason a settlement is the best way to resolve the dispute.

But it's unclear how many games the NFL would view as an acceptable number. The league can continue to insist on a one-year suspension but that’s an obstacle to a mutually beneficial settlement.

There are varying opinions within the NFL.

Some league staffers didn’t want Watson on the field for OTAs and minicamp after the Browns acquired him in a blockbuster trade with Houston. They want him to express remorse in his actions and willingly seek counseling before it’s mandated through the disciplinary process.

But Goodell didn’t exercise his right to place Watson on the Commissioner’s Exempt list because the league typically uses that designation to prevent players from suiting up for games.

With the NFL and Watson's legal team on opposite ends of the suspension spectrum, and seemingly far apart in any private negotiations, a settlement may not be an option.

In which case, Robinson will make the first call — which may not be the final verdict.