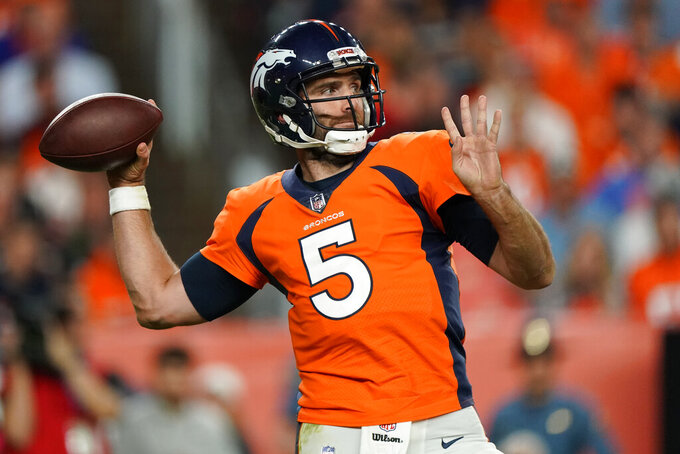 FILE - In this Oct. 17, 2019, file photo, Denver Broncos quarterback Joe Flacco (5) throws against the Kansas City Chiefs during the first half of an NFL football game in Denver. A person with knowledge of the move tells The Associated Press that the Denver Broncos are waiving Joe Flacco with a failed physical designation, putting another veteran NFL quarterback on the open market. The person spoke on condition of anonymity because the team didn't announce the decision. (AP Photo/Jack Dempsey, File)

The Denver Broncos are waiving Joe Flacco with a failed physical designation, a person with knowledge of the move told The Associated Press on Thursday.

The person spoke on condition of anonymity because the team didn't announce the decision.

Flacco went 2-6 as Denver's starter last season before a neck injury ended his season. He was eventually replaced by rookie Drew Lock, who went 4-1 down the stretch and was named the incumbent in 2020.

This week the Broncos agreed to a two-year, $5 million contract with free agent Jeff Driskel, who will back up Lock.

The move to cut ties with Flacco comes with a $13 million cap hit for the Broncos in 2020, but it frees up $10 million to spend in free agency.

The MVP of Super Bowl 47 while with the Baltimore Ravens, Flacco has missed large chunks of the past two seasons with injures, playing in nine games in 2018 in Baltimore and eight in 2019.

Last season he threw for just six touchdowns with five interceptions and he was sacked a whopping 26 times in his eight starts.

After the season ended, Flacco said he was optimistic he'd be medically cleared to continue his career and was open to a backup job if it came to that.

"I'm probably a little bit more worried about other things at this point," Flacco said on Dec. 30. "If that's what it has to be, then, I want to play football ... whether it's here or wherever, if that's what it's going to take for me to get back in and start playing again, then yeah, I'll go that route."

Flacco said at the time he felt good enough to throw the football but "the question is, when got hit or something like that, how I would hold up? The answer is probably not good at this point."

Flacco said at the time he wasn't sure if he'd need surgery and would get periodic MRIs in the offseason.

Providing he eventually can pass a physical, Flacco joins a Who's Who of quarterbacks available to the highest bidder, a list topped by Tom Brady, who's leaving New England after 20 years for Tampa Bay.

Other QBs on the move include: Teddy Bridgewater (from New Orleans to Carolina), Philip Rivers (from L.A. Chargers to Indianapolis), Case Keenum (from Washington to Cleveland), Chase Daniel (from Chicago to Detroit) and Marcus Mariota (from Tennessee to Las Vegas).

Also available are: Cam Newton (by way of trade), Jameis Winston, Josh McCown, Blake Bortles and Mike Glennon, among others.