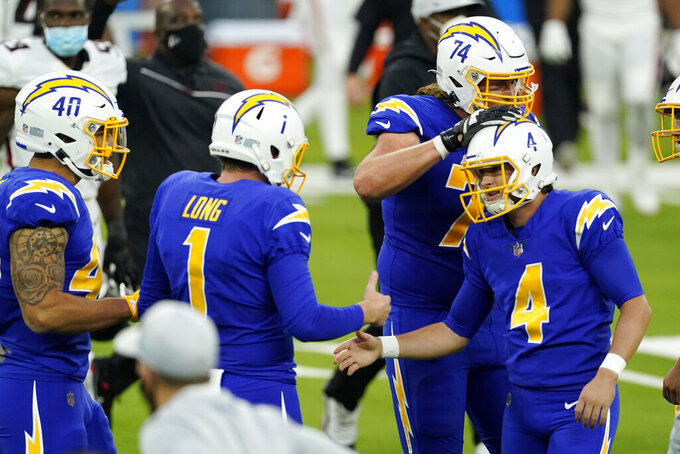 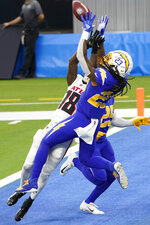 INGLEWOOD, Calif. (AP) — The Los Angeles Chargers finally found a way to close out a win this season.

The Bolts came into Sunday's game against Atlanta with four losses coming either in overtime or as time expired in regulation. But things finally lined up in their favor when Michael Badgley hit a 43-yard field goal as time expired to lift Los Angeles to a 20-17 victory.

“We’ve been struggling in that category and it feels good,” said running back Austin Ekeler, who had 146 scrimmage yards to help Los Angeles (4-9) snap a two-game losing streak.

Los Angeles got the ball on its 26 with 30 seconds remaining after Michael Davis picked off Matt Ryan's pass intended for Calvin Ridley.

That set the stage for Justin Herbert to direct his first game-winning drive. The rookie completed three of four passes, including a 15-yarder to Hunter Henry to midfield and a 25-yard throw along the left sideline to Tyron Johnson to get into Badgley's range.

After Kalen Ballage's 1-yard run to put the ball on the left hashmark, Badgley came on and split the uprights for the second game-winning kick of his career.

Herbert's drive is even more impressive considering he was without the starting right side of his offensive line while wide receivers Keenan Allen and Mike Williams were also sidelined.

“It was huge for us. We knew that when we went out there, we had the right guys out there and we ran the right plays,” said Herbert, who completed 36 of 44 passes for 243 yards with two touchdowns and an interception.

Herbert benefitted from the defense picking off Matt Ryan three times in the second half, which the Chargers were able to turn into 10 points.

After Rayshawn Jenkins picked off a pass intended for Ridley in the end zone, LA went 80 yards in 13 plays, which was capped off by Herbert rolling right and throwing a 12-yard strike to Johnson to even it at 17 in the third quarter.

Besides contributions from all three units, coach Anthony Lynn was pleased that his team was able to bounce back from last Sunday's 45-0 loss to New England, which was the biggest defeat in franchise history.

“We didn’t let one game beat us twice. We needed those turnovers and found a way to get the win,” he said.

Ryan completed 21 of 32 passes for 224 yards with a touchdown and three interceptions. Calvin Ridley, who went over 1,000 receiving yards for the season, had eight receptions for 124 yards and a score. The Falcons (4-9) were without four starters, including star wide receiver Julio Jones, and fell to 4-4 under interim coach Raheem Morris.

“I don’t think it was the read or pressure. I think it was just a poor throw,” said Ryan of the final pick. “I had to put it high in a way on the sideline and give Cal a chance.”

Atlanta went three-and-out on its opening possession and trailed 7-0 before scoring on its next three drives on Ridley's 39-yard touchdown catch, Younghoe Koo's 45-yard field goal and Laquon Treadwell's 9-yard touchdown for a 17-10 halftime lead.

Allen — who had nine receptions for 52 yards — passed Antonio Brown with the most receptions in a player’s first 100 games. The eighth-year receiver has 623 receptions in 99 games. Brown had 622 and Atlanta’s Julio Jones had 619.

The Chargers got points on an opening drive for the first time in seven games when Herbert found Allen near the right front pylon of the end zone for a 10-yard TD.

With Ryan lined up at wide receiver, Russell Gage took the direct snap and threw a 39-yard touchdown to Ridley to tie it at 7. It is the second pass the third-year receiver has thrown, but his first completion and touchdown.

Los Angeles is the first team since Houston in 2014 to allow two receivers to throw for scores in a season. Buffalo’s Cole Beasley connected with Gabriel Davis for a 20-yard score on Nov. 29.

The Chargers' special teams have been abysmal all year, but showed some signs of improvement.

After Koo's field goal gave the Falcons a 10-7 lead, Nasir Adderley returned the ensuring kickoff 76 yards to the Atlanta 23. Four plays later, Badgley was good from 35 yards to even it at 10.

Falcons: DT Marlon Davidson suffered a knee injury early in the third quarter and did not return.

Chargers: Williams (back) and OT Bryan Bulaga (concussion) left during the opening series and did not return. OG Trai Turner was evaluated for a concussion during the fourth quarter. Allen landed awkwardly on his back on the next-to-last drive and wasn’t in for the final series.