Barber's success an impressive ride since struggles as youth 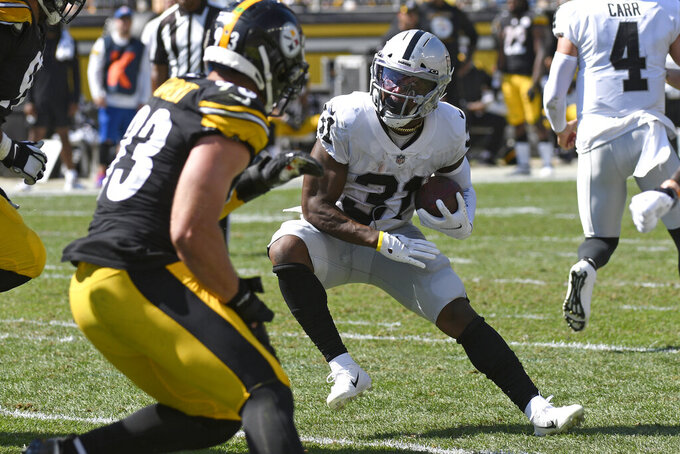 Las Vegas Raiders running back Peyton Barber (31) carries the ball during the first half of an NFL football game against the Pittsburgh Steelers in Pittsburgh, Sunday, Sept. 19, 2021. (AP Photo/Don Wright)

At some point, it may be good to introduce himself a bit more to his coach, Jon Gruden.

“I hardly know this guy, but I gave him a big hug and a game ball,” Gruden said after Barber compiled 143 yards of total offense and scored a touchdown in Las Vegas’ 31-28 overtime win over Miami.

Considering the struggles Barber overcame when he was younger, and the fact most of them fuel his drive as a football player, Gruden might be impressed.

From the time he was 7 through his sophomore season at Milton High School in Milton, Georgia, Barber lived with his mother and sister. There were nights they slept on makeshift cots on his grandmother’s floor, and others they slept in a car.

There were also times they had neither the roof of a house nor a car to sleep under.

“Man, I’m super thankful. I think about (that) every day,” Barber said. “It’s a blessing to be here. It’s just crazy how my story is.”

Barber has never lost focus after his mother, Lori, did whatever she could to make sure he and his sister were cared for while they were growing up.

Barber also overcame struggles in the classroom, where he suffered from ADHD and was in special education classes until his junior year of high school. As a freshman at Auburn, Barber was diagnosed with dyslexia.

“That doesn’t stop me,” Barber said. “If anything I see it as an advantage. I’ll struggle with it, but it’s really repetition.”

He’s bonded with fellow running back Kenyan Drake and knows he can lean on a tightknit group in the locker room when he’s struggling to read the playbook.

And like he refused to do when his mother was looking for shelter, he makes no excuses for his life. Instead, he chooses to take advantage of his capabilities.

“You’re talking about a guy who’s always got a smile on his face,” said UCF coach Gus Malzahn, who coached Barber at Auburn. “He’s a team-first guy. He’s going to be ready when called upon and he’s been that way his whole career, all the way back to college. You’re talking about a tough guy, too, mentally. It’s just his consistency. He never flinched ... he’s just stayed true to who he is. He’s got a winner approach in everything he does.”

In his first year with the Raiders, Barber has 36 carries for 143 yards and one touchdown, including 111 yards last Sunday.

Quarterback Derek Carr was shocked to learn of Barber’s past and the learning disabilities he still struggles with.

Carr also gained a new level of respect for his teammate of less than one month.

“I can tell you a lot about his character because I knew none of that,” Carr said. “He does not say anything about those things, he doesn’t make any excuses. That blows my mind. That makes me love the guy even more than I do because he hasn’t mentioned any of that. I think that’s a really impressive character trait that he has, that says 'I’m gonna overcome this and I’m gonna work my tail off no matter what,’ and he’s done a great, fantastic job.”

Josh Jacobs returned to the practice field Thursday but Gruden said the team will take it day by day, and he remains questionable for Monday’s game at the Los Angeles Chargers.

And while he’d like to have his star running back in the lineup, Gruden is confident in what Barber brings.

“This guy’s rise to where he is today is astonishing and it’s a credit to a lot of people that helped him along the way,” Gruden said. “Most importantly, it just defines the character of this kid. He’s gonna take advantage of every opportunity that he gets. You’re gonna have a hard time not liking him. And right now I love him and so do our players and our coaches. And we’re not gonna hesitate one bit to put him in a primary role after what he did against the Dolphins.”