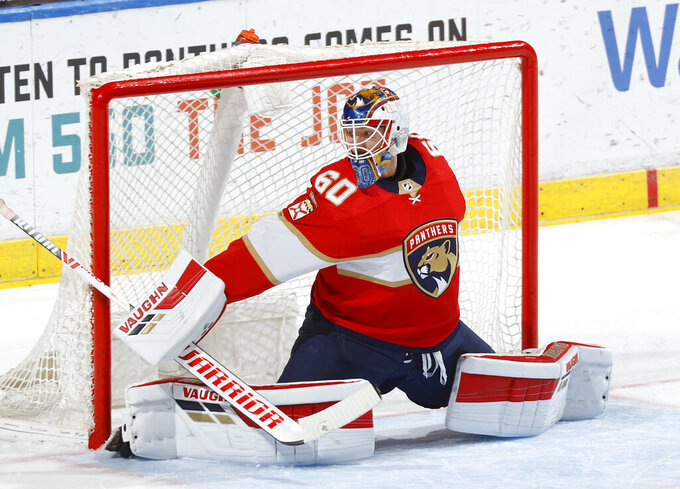 SUNRISE, Fla. (AP) — Aleksander Barkov scored 24 seconds into overtime to help the Florida Panthers tighten up the Central Division standings with a 4-3 win over the Carolina Panthers on Saturday night.

After a turnover in the Panthers’ end, Barkov raced the length of the ice and fired a shot that trundled in for his 22nd goal.

In winning for just the second time (2-4-2) against Carolina, the Panthers pulled within one point of the Hurricanes. Florida has seven games left in the regular season, Carolina nine.

Florida’s MacKenzie Weegar had a goal and two assists, Gustav Forsling and Alex Wennberg scored, and Chris Driedger made 16 saves.

Just 3:25 into the game, Hamilton fired a long shot that deflected in off the stick of Florida’s Patric Hornqvist.

Nedeljkovic stopped Sam Bennett’s shorthanded breakaway bid and Nikita Gusev’s 3-on-2 tip, but Bennett redeemed himself by forcing a turnover that Weegar rocketed in with 25 seconds left in the frame.

On a power play in the second, Hamilton blasted in his eighth goal at 1:35 — just eight seconds into the man advantage — to put the Hurricanes up 2-1.

Svechnikov built the Carolina edge to 3-1 when a shot deflected off his skate at 3:01 of the third, but Forsling trimmed the lead 1:47 later. Wennberg backhanded in a tying shorthanded goal at 6:20.

Due to Carolina’s injuries, coach Rod Brind’Amour said Saturday morning that he was shuffling his lines and getting players like defenseman Joakim Ryan in the lineup.

“We needed to get him in,” Brind’Amour said.

On Hockey Fights Cancer Night, the Panthers drew 4,838 fans for their final meeting against the Hurricanes.

Both teams will play Monday in the first of back-to-back road games — Carolina at Dallas, Florida at Nashville.