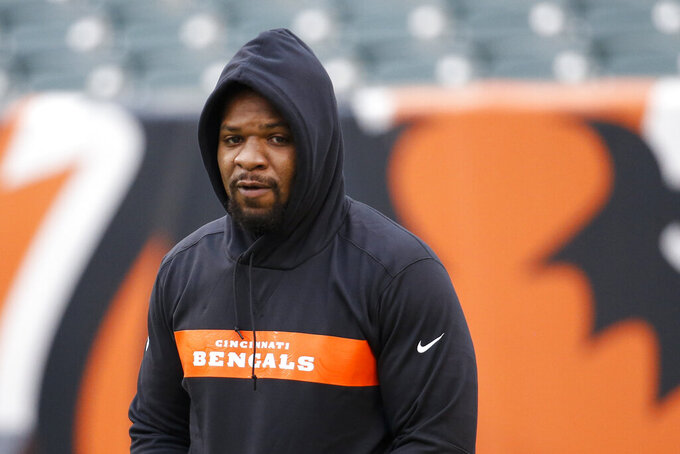 FILE - In this Dec. 16, 2018, file photo, Cincinnati Bengals outside linebacker Vontaze Burfict walks the field during practice before an NFL football game against the Oakland Raiders in Cincinnati. The Bengals terminated the contract of Burfict on Monday, March 18, 2019, releasing him to free agency. (AP Photo/Frank Victores, File)

The Bengals stuck with linebacker Vontaze Burfict through all his troubles, including a hit to Antonio Brown's head that led to a playoff loss. They finally released him on Monday after a season of below-average performance.

During seven seasons with Cincinnati, Burfict was repeatedly suspended by the NFL for egregious hits and violating its policy on performance-enhancers. He was fined regularly for hits that crossed the line, most notably the one to Brown's head that helped the Steelers rally for an 18-16 playoff win in the 2015 season.

Through it all, the Bengals stood solidly behind the linebacker and gave him contract extensions. His significant fall-off in performance last season led them to finally cut ties.

"As we continue to build our roster for the 2019 season, we felt it best to give both the team and Vontaze a fresh start," new Bengals coach Zac Taylor said. "Vontaze has been a good player here — the team appreciates that, and I know a lot of fans appreciate that — but our focus is on the future."

Burfict, 28, was suspended for the first four games last season for violating the NFL's policy on performance-enhancers, his third straight season with a suspension. A hip injury and concussions limited him to seven games with only 33 tackles, no sacks and no interceptions, by far the worst performance of his career.

Owner Mike Brown and former coach Marvin Lewis had defended Burfict through all his misdeeds, while he still made an impact on the field. Lewis was fired after a 6-10 finish last season, the Bengals' third straight losing season, and now Burfict is gone, too.

Nobody was willing to draft him out of Arizona State, where he repeatedly drew personal foul penalties. Burfict wrote a letter to NFL teams, and the Bengals — known for giving troubled players extra chances — brought him aboard for the 2012 season.

He was their best defensive player and one of the league's most controversial players, often in the middle of scrums and shoving matches.

In 2015, he missed the first six games while recovering from knee surgery and, in his return, led the Bengals to a 16-10 win in Pittsburgh. His tackle on Le'Veon Bell resulted in the running back tearing a knee ligament, adding fuel to the rivalry.

During their first-round playoff game at Paul Brown Stadium, Burfict's hit on Brown moved the Steelers in range for the winning field goal in the final seconds. Cornerback Adam "Pacman" Jones also got a 15-yard penalty after the play, making it an easy kick.

The NFL suspended Burfict for the first three games in 2016 as a result of his numerous egregious hits, including the one on Brown. The Bengals defended him and stuck with him.

Burfict was suspended again for the first three games in 2017 for an egregious hit during a preseason game. He got a three-year contract extension during the suspension, a sign of the Bengals' attachment to him.

During his career in Cincinnati, Burfict had 8½ sacks and five interceptions. He made the Pro Bowl in 2013.