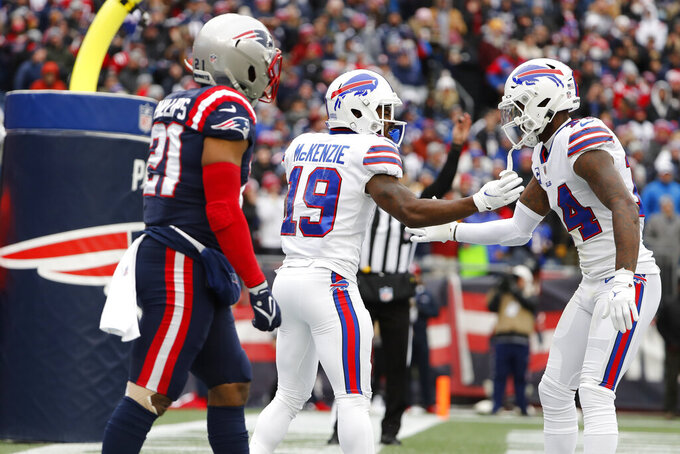 Buffalo Bills wide receiver Isaiah McKenzie (19) is congratulated by Stefon Diggs (14) after his touchdown during the first half of an NFL football game, Sunday, Dec. 26, 2021, in Foxborough, Mass. At left is New England Patriots safety Adrian Phillips (21). (AP Photo/Winslow Townson)

ORCHARD PARK, N.Y. (AP) — For three weeks, safety Jordan Poyer and the Buffalo Bills had to live under the cloud of being embarrassed by Bill Belichick and the New England Patriots on national TV.

“Embarrassing” was the word phrased in a question Poyer took issue with following a 14-10 prime-time loss to the Patriots on Dec. 6 in which Buffalo ceded first place in the AFC East against an opponent who attempted just three passes in blustery conditions.

On Sunday, the Bills (9-6) overcame two months of doubts regarding their inconsistencies and a COVID-19 depleted lineup to finally begin changing the narrative with a convincing 33-21 victory at Foxborough, Massachusetts.

Though tied with New England atop the division standings, Buffalo has the tiebreaking edge and needs only to win its final two games — both at home against Atlanta (7-8) followed by the New York Jets (4-11) — to clinch its second consecutive AFC East title for the first time since a four-year run from 1988 to ’91.

Not lost in the moments following the win, as reported by The Athletic, was Poyer leaving the field and wondering aloud what the reporter who raised the embarrassing question thought about them now.

Motivation, apparently, takes many forms, and it might have come at just the right time for Buffalo to finally play up to preseason expectations.

And much of the credit for the victory goes not to a defense, which allowed the Patriots to convert five of six fourth-down chances and score on two of its three second-half possessions before Micah Hyde ended New England’s final drive with his second interception of the game.

The key to this victory goes to a Josh Allen-led offense that ate up more than 35 minutes of game clock and never attempted a punt for just the fifth time in team history.

Days after finishing fourth in the AFC Pro Bowl vote, Allen played what could be considered his most complete game given the stakes and a lineup missing two of its four top receivers — Cole Beasley and Gabriel Davis (reserve/COVID-19 list) — and a patchwork offensive line.

Having previously been faulted for attempting to force passes or do too much on his own, the fourth-year starter remained patient in playing within the constraints of what the Patriots defense presented him in guarding against the deep threat.

Allen oversaw touchdown drives which combined for 42 of Buffalo’s 75 snaps, with two totaling 13 each. And he did so by keying in on Isaiah McKenzie, who set career highs with 11 catches and 125 yards, while scoring the game-opening touchdown.

To put that in perspective, McKenzie had combined for just seven catches for 38 yards in 12 previous appearances this season. And it came after he had been benched for two games after muffing a punt in a 41-15 loss to Indianapolis on Nov. 21.

Allen’s value to the Bills has been priceless in a season in which his 38 touchdowns rank second in the NFL, one behind Tampa Bay’s Tom Brady.

“I mean, Josh makes a quarter of a billion dollars, you know,” left tackle Dion Dawkins said, referring to the six-year contract extension Allen signed in August. “Josh is worth every penny.”

Poyer made sure to compliment Allen.

“Josh played a hell of a game, the offensive line, that whole offense did what they had to do,” Poyer said.

McKenzie. With the unvaccinated Beasley and Davis in jeopardy of missing a second consecutive game, the fifth-year speedster whom Buffalo claimed off waivers in 2018 proved he is more than just a part-time gadget player.

Beasley. With one year left on his contract after this season, and causing distractions for his vocal anti-vaccine stance since June, the 10-year veteran just might be replaceable.

OL Ike Boettger will miss the rest of the season after rupturing his Achilles tendon. ... WR Stefon Diggs returned after appearing to hurt his left shoulder. ... OL Jon Feliciano missed his second consecutive game on the reserve-COVID-19 list. ... DT Star Lotulelei’s status is uncertain after being excused for personal reasons. ... DB Cam Lewis was added to the reserve-COVID-19 list on Monday.

18-4 — Allen’s career record when he doesn’t commit a turnover. He snapped a seven-game turnover streak in which he combined for nine interceptions and lost two fumbles.

Two wins and Buffalo’s in, starting with a non-conference matchup against Atlanta. The Falcons are coming off a 20-16 victory over Detroit, and hasn’t won consecutive games since Weeks 8-9 last season.