Bills double up on DEs with Basham; Take OT Brown at 93 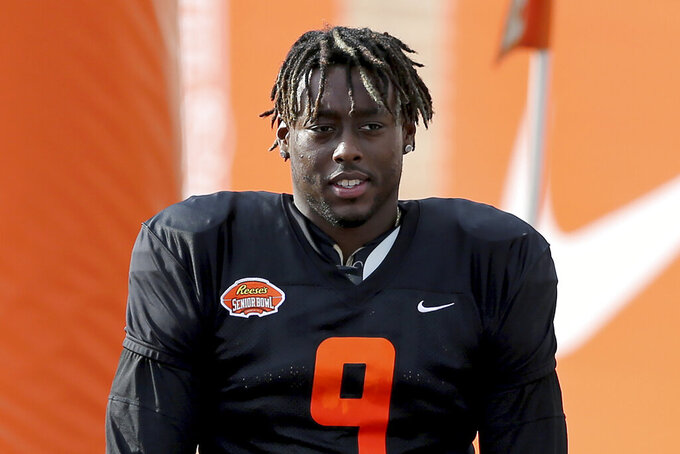 FILE - American Team defensive lineman Carlos Basham Jr., of Wake Forest (9), takes a break during the American team practice for the NCAA college Senior Bowl in Mobile, Ala., in this Wednesday, Jan. 27, 2021, file photo. Basham is a possible first round pick in the NFL Draft, April 29-May 1, 2021, in Cleveland.(AP Photo/Rusty Costanza, File)

Short of putting 12 defenders on the field to contain Mahomes, as Beane joked last week, the Bills general manager did the next best thing by doubling down in selecting edge rushers with Buffalo’s first two picks of the NFL draft.

After taking U niversity of Miami’s Greg Rousseau in the first round on Thursday, the Bills chose Wake Forest’s Carlos Basham with their second-round pick, 61st overall on Friday.

Size mattered to Beane, whose Bills got bigger on both sides of the line.

“Dave Gettleman once told me, big men allow you to compete. And I agree with that," he said, referring to his former boss in Carolina now with the New York Giants. “You want to be strong up front. It’s a big man’s game.”

Basham is listed at 6-foot-3 and 274 pounds, in being described by an NFL scouting report as having “a brawny frame.” Brown is listed at 6-foot-8 and 311 pounds. And the Bills posted a photo on Twitter of the 6-foot-6 Rousseau towering over Beane and coach Sean McDermott.

The injection of youth at defensive end was a priority with returning starters Jerry Hughes and Mario Addison in their 30s and entering the final year of their contracts. And it comes after Buffalo’s season ended with Mahomes picking apart the Bills by going 29 of 38 for 325 yards and three touchdowns in a 38-24 win in the AFC championship game.

Buffalo finished 15th in the NFL with 38 sacks, and tied for 20th with 143 quarterback pressures.

Though Beane acknowledged he wasn’t expecting to select defensive ends with Buffalo’s first two picks, Basham proved too good to pass up. Without specifying which NFC team, Beane said he had agreed to trade the 61st pick to add selections and move back in the draft order on the condition Basham wasn’t available.

“I thought it was going to be a good trade for us, but I subscribe to the theory that you can’t have enough pass rushers,” Beane said.

Nicknamed “Boogie” by his babysitter for how he’d like to jump around and dance, Basham is coming off a senior season in which he led the Demon Deacons with five sacks in just seven games, while missing time recovering from COVID-19.

His best season came in 2019, when he had 11 sacks and forced three fumbles in earning first-team ACC honors. Overall, he finished his college career with 20 1/2 sacks, the fourth-most in school history, four forced fumbles and three fumble recoveries.

Basham and Rousseau were selected a year after Buffalo made Iowa defensive end A.J. Epenesa their top choice by picking him in the second round of the draft last year.

Basham is eager to get to Buffalo, and isn’t shying away from the competition. He’s friends with Epenesa, by saying he stayed in touch with Epenesa during his pre-draft process and through much of his rookie season in Buffalo. He’s certainly aware of Rousseau, who also played in the ACC.

“Young guys coming in, just want to learn and just want to play,” Basham said. “Get all three of us in that system, that’s pretty cool.”

The focus on defense comes after the Bills spent the past three seasons focusing heavily on retooling a Josh Allen-led offense which delivered in playing a key role in Buffalo clinching its first AFC East title since 1995 and making its deepest playoff run in 27 years.

Payroll also plays a factor in the Bills decision to restock its defensive line. Buffalo is projected to have little wiggle room under the salary cap entering next offseason, especially with Allen projected to command a high-price salary once his rookie contract expires within the next two years.

Brown adds depth to an offensive line that has all five starters returning, allowing him time to develop behind left tackle Dion Dawkins and right tackle Daryl Williams.

Named a preseason FCS All-American last year, Brown elected to forego his senior year by entering the draft after the Missouri Valley Conference postponed starting its season until this spring due to the coronavirus pandemic. Overall, he had 32 career starts mostly at right tackle over three seasons.

“Not having a season, it just made me focused and be more determined than I ever was,” Brown said, noting he spent seven months working out in California.

UP NEXT: Barring trades, Buffalo closes the draft with five picks over the final four rounds on Saturday, starting with two fifth-rounders at 161st and 174th overall.