Bills expected to focus on defense with late 1st-round pick 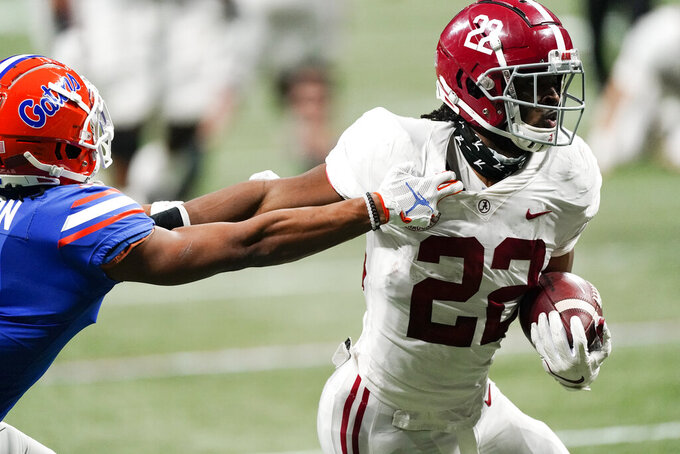 FILE - In this Saturday, Dec. 19, 2020 file photo, Alabama running back Najee Harris (22) runs into the end zone for a touchdown against Florida during the first half of the Southeastern Conference championship NCAA college football game in Atlanta. Brandon Beane didn’t entirely rule out the possibility of adding a running back in the first two rounds, with Clemson’s Travis Etienne and Alabama’s Najee Harris rated as the top prospects (AP Photo/John Bazemore, File)

BUFFALO, N.Y. (AP) — Brandon Beane hopes he becomes accustomed to picking at the back of the pack in the NFL draft for years to come following the Bills’ breakthrough season.

The lower in the draft order a team selects, the more it reflects success.

And that’s becoming apparent in Buffalo, where the general manager has in four years transformed a franchise which opened the millennium missing the playoffs for 17 consecutive seasons into the makings of a long-term contender.

“It’s a good problem,” Beane said of the Bills opening the draft with the 30th selection next week.

“I wish we were picking 32. That’s the goal,” he added, noting the last pick of the first round goes to the Super Bowl champion.

Beane’s taking it one step at a time following a season in which the Bills (15-4) won their first AFC East title since 1995, and enjoyed their deepest playoff run in 27 years before losing to Kansas City in the conference championship game.

Having erased one of the franchise’s biggest concerns in finding stability at quarterback with Josh Allen, and already holding discussions to sign the third-year starter to a long-term extension, Beane can focus on addressing other needs.

And that starts with upgrading a defense which featured an inconsistent pass rush, and particularly struggled against both the run and pass in twice losing to the Chiefs last season.

Clyde Edwards-Helaire trampled Buffalo with 161 yards rushing in the Chiefs’ 26-17 win on Oct. 19. Three months later, Patrick Mahomes picked apart the secondary in going 29 of 38 for 325 yards and three touchdowns in a 38-24 win to end Buffalo’s season.

Beane allowed himself to crack a joke when asked how the Bills plan to contain Kansas City, saying: “Maybe, if we get a 12th defender on the field.”

He then turned serious in stressing how important it is to build a defense that can counter such a dynamic attack.

“We’ll continue to try and add as many defensive players that can help stop him. But it’s never going to be easy,” Beane said.

That leaves Buffalo focused more on adding to its defense with its top pick for a third consecutive year.

The Bills used the No. 9 slot to select lineman Ed Oliver in 2019, and chose end E.J. Epenesa at 54 last year after trading their first-round selection to acquire receiver Stefon Diggs in a trade with Minnesota. Diggs had an All-Pro season in 2020.

Though trading up in the draft is a possibility, Beane would be more open to moving back, especially if the players Buffalo ranks as having first-round grades are off the board.

“I wouldn’t be surprised if we don’t get some calls for 30,” Beane said. “We just have to make a judgment about how we see the board, and if we’re willing to give it up.”

Buffalo enters the draft with seven selections, including two fifth-rounders and none in the fourth.

Buffalo filled the loss of receiver John Brown by signing Emmanuel Sanders, and also added veteran depth to its offensive line. Buffalo added one pass-rushing specialist in Efe Obada, who had a career-best 5 1/2 sacks in his third season with Carolina last year.

Beane didn’t entirely rule out the possibility of adding a running back in the first two rounds, with Clemson’s Travis Etienne and Alabama’s Najee Harris rated as the top prospects.

In assessing his backfield tandem of Devin Singletary and Zack Moss, Beane didn't consider either of them being "home-run hitters.” Buffalo finished 20th in the NFL in yards rushing last season.

Beane will wait until after the draft before determining whether to pick up the fifth-year options on Allen and linebacker Tremaine Edmunds to lock them up through the 2022 season. The deadline to do so is May 3.

One issue is salary-cap constraints, given the two would account for a projected $35 million of payroll.

“It’s not an ideal scenario to pick them both up and not extend them,” Beane said. “So we have to kind of figure out how we can make that work in our system.”

Tight end Tommy Sweeney is expected to resume practicing after being diagnosed with an inflamed heart, which ended his season in November. The condition is connected to COVID-19 and was diagnosed after Sweeney spent time on the team’s reserve/COVID-19 list.

Beane said the third-year player has been cleared to work out after his most recent meeting with a cardiologist, though his condition will be monitored with follow-up visits scheduled.