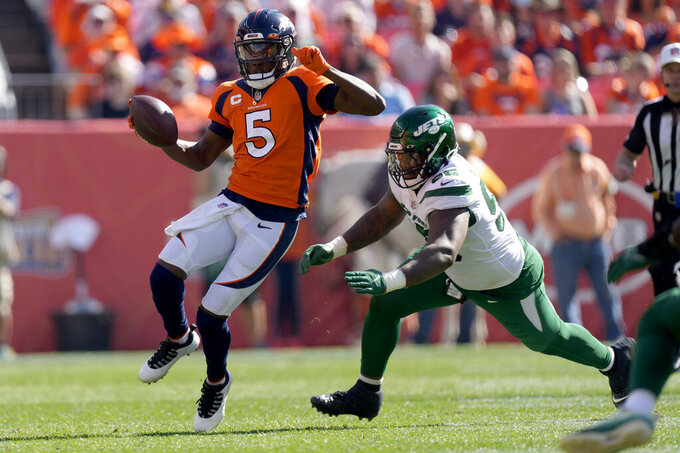 Second-year speedy receiver K.J. Hamler is out for the season after tearing his left ACL in the Broncos' 26-0 crushing of the New York Jets on Sunday.

That makes seven starters who have gotten hurt since the Broncos entered this season boasting their best depth in half a decade.

“It’s getting tested a little too early" and a little too often, coach Vic Fangio said Monday, “but we are a deeper team than we have been in the past, and I think we’ll be able to absorb it.”

Fangio didn't have any updates on the status of injured guards Dalton Risner (foot) or Graham Glasgow (left knee). He only said their injuries weren't of the season-ending variety like Hamler's.

Both could be sidelined Sunday when the Broncos (3-0) host the Baltimore Ravens (2-1), the only other team in the NFL whose depth has been tested as much as Denver's.

In the opener, the Broncos lost Teddy Bridgewater's top target, Jerry Jeudy, to a high right ankle sprain that will sideline the team's 2020 first-round draft pick until November.

In Hamler, Bridgewater lost his fastest, most elusive target, one who could stretch the defense as evidenced by his 80-yard touchdown catch in the preseason.

“It hurts because out of all of us, he was a different one,” receiver Tim Patrick said. “He had God-given speed, so it’s definitely tough.”

The Broncos are pondering the promotion of one of the young wideouts from their practice squad or the signing a veteran free agent.

For now, their top three receivers are the undrafted, late-blooming Patrick, Courtland Sutton, who's a year removed from a torn ACL himself, and kick returner Diontae Spencer, who has 10 career catches since coming to Denver in 2019 after four seasons in the Canadian Football League.

The ripple effects of their injury epidemic even reach into their preparations for Ravens elusive quarterback Lamar Jackson, who Fangio said is "hard to contain. He's a special talent. It’s almost like Barry Sanders is playing quarterback. We’ll try our best.”

Normally, the perfect person to imitate Jackson on the scout team in Denver this week would be Kendall Hinton, a college QB who converted to wide receiver (and back to QB last year when he was called up from the practice squad to face the Saints when all of Denver's quarterbacks were quarantined for COVID-19 exposure).

“But I don’t know that we want Kendall running around against our defense now that he’s moved up the depth chart here in last few weeks,” Fangio said. “He’d be a possibility, but I’m not sure anybody can simulate him anyway.”

The defense. The Jets punted on their first six drives sandwiched around a possession that petered out at halftime. The Broncos forced four turnovers to close out the game, twice on interceptions of Zach Wilson and twice on downs.

The injury-ravaged offense. Bridgewater has completed a whopping 76.8% of his throws, but it would help if TEs Albert Okwuegbunam and Noah Fant combined for more than the three receptions for 21 yards they had Sunday.

Patrick, who had five catches for 98 yards. He never drops the ball, makes sure 50-50 balls are his — or no one's — and quietly leads through his play. The Broncos might want to sign him to an extension before his price skyrockets.

Special teams, for allowing a partially blocked punt that traveled just 26 yards. One day coordinator Tom McMahon's units will have a clean game. Next week against the Ravens would be an opportune time.

20-9 — Fangio's record against rookie QBs as a DC or head coach.

26 — The total points the Broncos have allowed, their third-lowest total through three games in team history.

110 — Sacks by Von Miller, the NFL's active career leader, placing him 23rd on the all-time list.

Showing everyone and maybe even themselves that they're for real by beating Baltimore. Maybe that would quiet the doubters pointing to their opponents' cumulative 0-9 record.