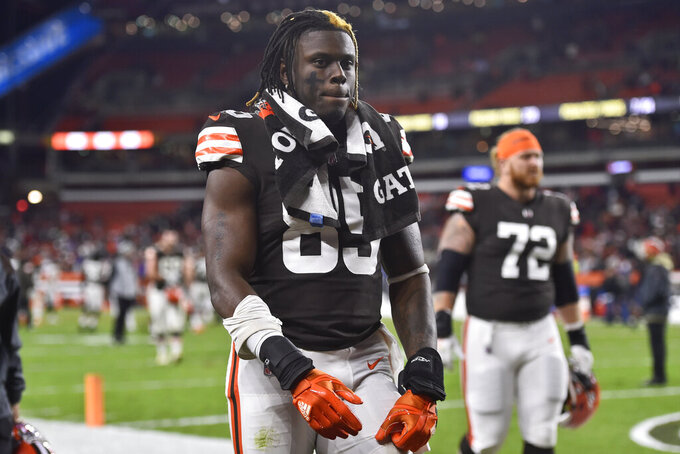 CLEVELAND (AP) — Improbable ended up being impossible for the snake-bit Browns.

Three seconds from pulling out an all-hands-on-deck win under extraordinary circumstances, and with a chance to seize first place in the cluttered AFC North and tighten its grip on a playoff spot, Cleveland crumbled.

A last-second, 16-14 loss to the Las Vegas Raiders was a brutal gut punch to the Browns and their playoff chances, now hanging by a thread.

They played without Stefanski because of a positive COVID-19 test and were also missing quarterback Baker Mayfield, Jarvis Landry, Jadeveon Clowney and several other starters after the virus ravaged their roster.

Before Monday's game, which was originally to be played Saturday, the Browns had barely practiced and essentially made up their game plan on the fly. They started third-string QB Nick Mullens slid Pro Bowler Joel Bitonio from left guard to tackle and had backups at key spots.

All that, and they nearly won.

“I thought the coaches and the players who were out there fought their rear ends off,” Stefanski said. “I appreciate that, but ultimately, did not get the job done, and that is what stings.”

And now, with the playoffs almost hard to fathom, the Browns are awaiting test results on star defensive end Myles Garrett, who injured his groin in the fourth quarter.

It's not yet known if he'll play in Saturday's game at Green Bay — a key game for Cleveland to have any chance at the postseason.

Garrett made a leaping try to block Daniel Carlson's 48-yard field goal as time expired, but the kick sailed over his outstretched fingers, perhaps symbolic during a season in which everything has been just out of reach.

The Browns (7-7) were agonizingly close to finishing off the Raiders. But as has been the case in other losses this season, they didn't execute when it mattered most and instead allowed an opponent to put them away.

So many plays, but a pivotal one cost Cleveland dearly.

Clinging to a 14-13 lead, the Browns couldn't pick up a late first down — Nick Chubb was stopped for no gain on a third-and-3 — that would have ended the Raiders, who had used up their timeouts.

Then, Cleveland's defense didn't get the stop it needed as Las Vegas quarterback Derek Carr moved the Raiders in range for Carlson to kick the game winner — and the Browns into last place in their division.

Stefanski didn't blame anyone or COVID-19.

The Browns had a chance to pull off a victory Cleveland fans might have savored more than any in memory.

Instead, a season that began with Super Bowl aspirations is becoming another one to forget.

“Ultimately, we didn't come through,” Stefanski said. "It's frustrating to all of us. We have high expectations on ourselves to come through in big moments, but we did not get it done last night.”

The Browns need something positive other than COVID-19 tests.

As of Tuesday, they still had 22 players on the COVID-19 reserve list, and Stefanski remained sidelined along with two other coaches. Under the NFL's new policies, players only need to produce one negative test to be activated.

Otherwise, they have to wait until their 10-day isolation window ends. That would be Saturday for Stefanski and Mayfield, who would have to travel separately to Green Bay. The team will travel Friday.

Other than not being able to stop Carr in the last two minutes, Cleveland's defense had another solid game. The Browns have held opponents to 17 points or fewer in six of the past eight games.

Garrett could barely move, but he refused to come off the field in the fourth quarter. He's talked a big game all season and backed it up.

“Myles plays very, very, very hard,” Stefanski said. "He leaves it all out there.”

Kicker Chase McLaughlin's miss on a 47-yard field-goal attempt was critical in another one-score game. He's just 6 of 12 in the past eight games.

Stefanski didn't rule out a possible change in the kicking game so late in the season.

“Chase understands that he has to makes those kicks,” Stefanski said. "He puts as much pressure on himself as anybody else. He wants to come through, and we are counting on him.”

Stefanski had no updates on any of the COVID-19 players. ... DE Takk McKinley suffered a season-ending torn Achilles tendon, a loss that will hurt even more depending on the status of Garrett and Clowney. ... S John Johnson III is day to day with a hamstring injury.

Merry Christmas from Lambeau Field as the Browns visit Aaron Rodgers and the Packers (11-3), who wrapped up their division last week and are trying to lock up the NFC's top seed.