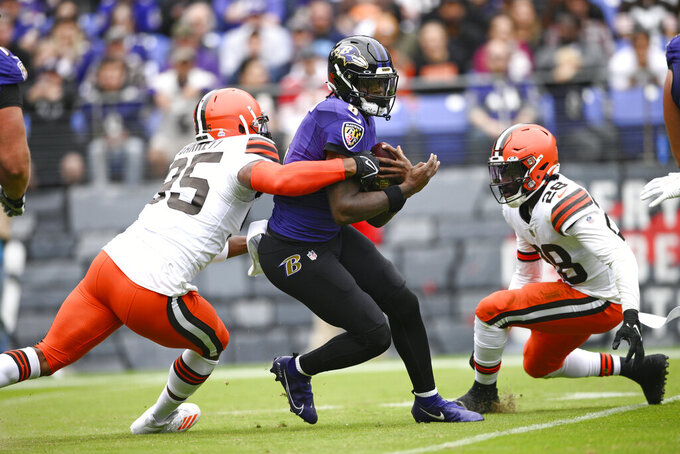 CLEVELAND (AP) — After being the Grim Reaper — complete with scythe and cape bearing names of quarterbacks he's sacked — a year ago on Halloween, Myles Garrett might not wear a costume to Monday night's matchup against Cincinnati.

“I was just planning to go in and do my job and dress up as a football player,” Garrett said.

Garrett, still playing at an elite level despite being slowed by injuries sustained in a car crash last month, is trying to keep his focus on saving a season that has gone from troubling to terrifying for the Browns (2-5), who have lost four straight entering their game against the Bengals (4-3).

Another loss, particularly in the AFC North, would further damage the Browns' already dinged-up postseason hopes.

But following a solid performance last week in Baltimore by a Cleveland defense that has had its share of issues in 2022, Garrett feels confident.

“I like our chances,” he said. “Our defense has had good games against the Bengals and Burrow and I think we know what it takes to really make him uncomfortable and get after him. And although he’s talented — love his family, but we’ve got to put him in the dirt.”

The Bengals won't have star receiver Ja'Marr Chase, Burrow's top target and deep threat, because of a nagging hip injury.

On Saturday, Bengals coach Zac Taylor said Chase, who has 47 catches and six touchdowns, will not go on injured reserve, pointing to the team expecting him back in less than a month.

Even without Chase, Burrow has plenty of playmakers in receivers Tee Higgins and Tyler Boyd and running back Joe Mixon to frighten the Browns.

Though Cincinnati's attack won't look the same, Garrett doesn't expect Burrow to do anything differently.

“He’ll still playing the same and still has a variety of skill guys he can get the ball to in a variety of ways,” Garrett said of Burrow, who is 0-3 as a starter against Cleveland. “I know he’ll definitely miss him (Chase) and his presence in this offense.

"But he’s still able to open and throw many of the same routes and the same kind of concepts to those guys because there are just a lot of talented receivers that they have.”

Garrett has six sacks this season, but he hasn't been as dominant since injuring his shoulder and biceps when he veered off a road near his home and flipped his Porsche following practice on Sept. 26.

Garrett's still healing and admitted he probably should have taken more time off — he missed just one game — following the accident caused by him speeding. He's not at his best, but that doesn't mean he can't be effective.

“I feel like I’m going to make a way out of no way,” he said. "If I’m a 10, and now I’m an eight, I’m eight amongst all these great pass rushers around the league. So my 80 percent is a little bit different from everyone else’s.

“There’s some situations where I get in when I’m pass rushing or I’m in a run block where I feel kind of in a compromised position, but those have been happening fewer and fewer as those weeks have gone by, days have gone by.”

Although there may be times in games where Garrett could take a breather, he won't. He can't.

It's not in his DNA to coast, and the Browns need him more than ever.

“There are things that are holding me back,” said Garrett, who has 5 1/2 sacks in his past four games against the Bengals. "My legs still work so if I can run to the ball, if I can get a punch-out, if I can be effective, if I can make them bring two or three guys my way or I make them shift and the guard has to come help because I’m getting the other two guys, or whatever it is.

This is Garrett's favorite time of the year, "spooky season.”

An art enthusiast, Garrett had his house playfully decorated for Halloween the past two years. Last October, his front yard was turned into a cemetery with headstones inscribed with names of quarterbacks he's “buried” during his career.

This year's theme was the popular TV series “Stranger Things,” Garrett's favorite show and a title that also sums up Cleveland's season to this point as Deshaun Watson's suspension, Garrett's wreck, injuries and close losses — four by a total of nine points — have pushed the Browns into this situation.

“It looks amazing,” Garrett said of his home's haunting exterior. “It was a step above last year, and I think last year was pretty damn good. And that might be what I’m dressing up as, if I’m dressing up.”

Garrett, the football player, may do the trick for the Browns.