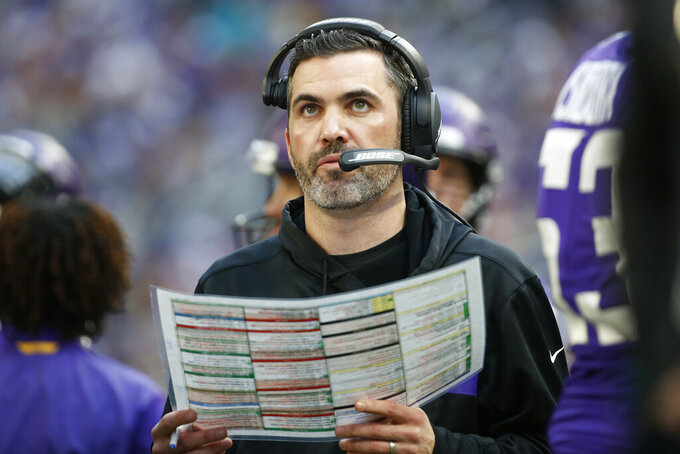 FILE - In this Sunday, Dec. 16, 2018, file photo, Minnesota Vikings interim offensive coordinator Kevin Stefanski watches from the sideline during the first half of an NFL football game against the Miami Dolphins in Minneapolis. With the Carolina Panthers and New York Giants completing coaching hires on Tuesday, Jan. 7, 2020, the Cleveland Browns job vacancy will be the last NFL opening filled. It's still unclear how quickly that will happen. The Browns, who fired Freddie Kitchens after just one season, are in the second week of interviews and have scheduled meetings this week with Patriots offensive coordinator Josh McDaniels and Vikings coordinator Kevin Stefanski. (AP Photo/Bruce Kluckhohn, File)

Kevin Stefanski was the Cleveland Browns' second choice last year. He could be the first this time.

The Vikings offensive coordinator interviewed with the Browns for their coaching job on Thursday, the 37-year-old taking a break from preparing for this weekend's playoff game against San Francisco to make another impression on Cleveland's search committee.

Stefanski was in the running to be the Browns coach a year ago and met with the team twice. He was reportedly favored by chief strategy officer Paul DePodesta, but owners Dee and Jimmy Haslam opted for Freddie Kitchens, who was fired following a drama-filled 6-10 season.

Stefanski has polished up his resume a bit in his one season running Minnesota's offense, and there's a chance he could emerge as Cleveland's pick.

He is the seventh candidate to meet with the Browns, who talked with Eagles defensive coordinator Jim Schwartz on Wednesday. The Browns are scheduled to interview Patriots offensive coordinator Josh McDaniels on Friday. He is the presumed favorite to get the gig because McDaniels has both NFL head coaching experience and success working with star quarterback Tom Brady.

Two years ago, McDaniels agreed to coach the Indianapolis Colts, but he backed out to stay with New England. He went 11-17 as Denver's coach in 2009-10.

Stefanski has never been a head coach, but it seems to be only a matter of time before he's hired — either by the Browns or someone else.

He broke into coaching at age 24 with Minnesota as an assistant in 2006. Stefanski has survived numerous regime changes with the Vikings and coached the team's running backs, tight ends and quarterbacks before becoming the offensive coordinator this season.

Stefanski’s father, Ed, is a longtime NBA executive who currently works as an adviser with the Detroit Pistons.

"He’s been around sports all the time. He’s very smart. He’s an Ivy League guy, very hard worker,” Vikings coach Mike Zimmer said. “Then as his time has grown, I’ve given him different responsibilities, whether it would be the running backs or tight ends or quarterbacks, now offensive coordinator. I think he sees the game kind of how I see it. Then he’s done a nice job of mixing the calls in.”

Stefanski helped guide the Vikings to a 10-6 regular-season record, and they stunned the New Orleans Saints in the wild-card game. Minnesota's winning touchdown was set up by a 43-yard pass from Kirk Cousins to wide receiver Adam Thielen, who believes Stefanski is ready to be a head coach.

“He'd do a great job in that role,” Thielen said. "He’s got such a great demeanor about him. He doesn’t get too high and he doesn’t get too low, and I think that’s a great demeanor to have as a head coach. I think he controls the room extremely well. I think he brings a positive energy at all times, and I just think that he’s very organized and he’s prepared and would do a great job in that role.

"Obviously, we have a lot of respect for him in this building and don’t want to lose him, but that’s just how this business works, and we’ll see how it goes. He has all the things you need to be a good coach in this league, and I’m sure he’ll get his opportunity at some point.”

On Saturday, Stefanski's offense will match up against the 49ers and their defense led by coordinator Robert Saleh, who interviewed with the Browns last week.