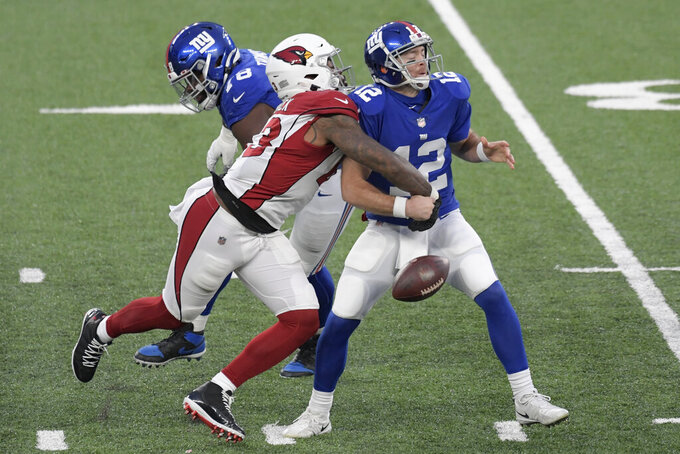 Linebacker Haason Reddick doesn't mind admitting he shed a few tears of joy after the brilliant, five-sack afternoon that etched his name into the Cardinals' record books.

The emotions were intense for the former 13th overall draft pick in 2017, who has morphed from a borderline bust to one of Arizona's best defensive players as the team makes a December playoff push for the first time in years.

Some players say they don't care about numbers or records. Reddick's not one of them.

“The game means a lot, it's important, it's one for the history books,” Reddick said of his franchise-record five sacks in a 26-7 win over the New York Giants on Sunday.

“No matter what people say, or what happens from here on out, they can never take that day away from me.”

It's understandable why Reddick would savor his recent success given his first four seasons in the NFL haven't always been smooth. He played for three different coaches in his first three seasons — Bruce Arians, Steve Wilks and Kliff Kingsbury — and his role was constantly changing.

At 6-foot-1 and 235 pounds, previous coaches tried to play him at inside linebacker where he wasn't comfortable, but Kingsbury and defensive coordinator Vance Joseph eventually moved him back to the outside where he can rush the passer. Now that he's had the same coaching staff for two straight seasons, he's made steady improvement.

He's already set career highs with 10 sacks, 13 tackles for a loss and 15 quarterback hits with three games remaining. The Cardinals (7-6) need Reddick to keep producing when they host the Philadelphia Eagles (4-8-1) on Sunday and try to hang on to a spot in the NFC playoff race.

Joseph said Reddick's breakout Sunday was the product of lots of hard work.

“It was a proud moment,” Joseph said. “This kid has had some rough days here the past three years. To watch him have a day like that, his teammates and coaches be so excited for him, that was fun to see. It all starts and finishes with him, his attitude and his personality.

Reddick has all the chances he could ever want this season, especially after 2019 All-Pro linebacker Chandler Jones was lost for the season because of a biceps injury in October. Jones had 19 sacks last season and it was easy to wonder if Arizona's defense was doomed.

But Reddick's rise, along with help from guys like Dennis Gardeck and Markus Golden, has made the Cardinals' pass rush much more potent than expected. They're sixth in the NFL with 37 sacks.

Against the Giants, Reddick's moves beat New York's offensive line over and over as he crashed into quarterbacks Daniel Jones or Colt McCoy, forcing three fumbles. Gardeck said Reddick's “so fast off the line you can kind of see him win before he even gets the sack.”

Gardeck also had two sacks against the Giants while Golden had one.

“They have that group mentality where it’s not about who gets there, it’s just about getting there,” Kingsbury said. "It’s been awesome, couldn’t be prouder of Haason and what he’s been able to do, and hopefully we can keep it going.”

Reddick's used to adversity during a football career that hasn't always gone as planned. He wasn't recruited much by colleges because of injuries during high school and ended up being a walk-on at Temple.

He was a role player his first two college seasons before slowly growing into a star. During his senior year he had 22 1/2 tackles for a loss, 9 1/2 sacks and an interception, which led to his selection in the first round by the Cardinals.

His NFL career sputtered during the early years and the Cardinals had enough reservations about his ability that they declined his fifth-year option during the past offseason. But the 26-year-old is playing very well now as he approaches free agency, and it appears he's about to get a big payday, whether it's from the Cardinals or someone else.

“I've never doubted myself, I've always believed in myself,” Reddick said. “I knew it was a matter of time and the goal is to get better from this point forward.”

By Teresa M. Walker an hour ago
5 hrs ago
By Greg Beacham 6 hrs ago
7 hrs ago
By Brett Martel 7 hrs ago