Chargers' NFL-worst run defense to be tested again by Cook 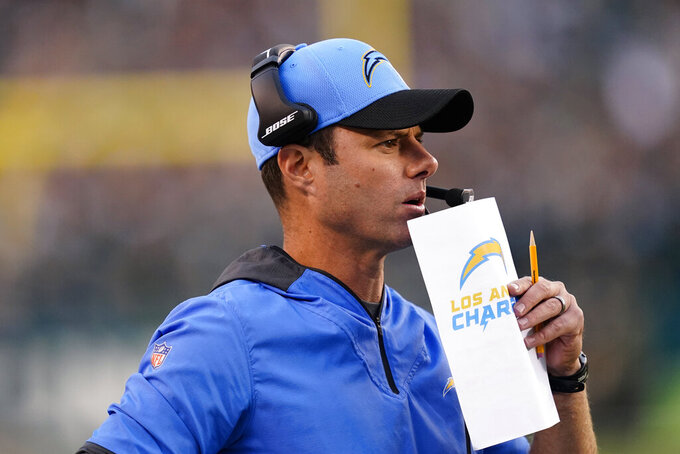 COSTA MESA, Calif. (AP) — Trying to fix a porous run defense is challenging enough in the middle of a season. The Los Angeles Chargers are looking for ways to improve while facing some of the top running backs in the league.

The Chargers (5-3) are tied for the AFC West lead but are last in the league at stopping the run, and this week they have to face Dalvin Cook and the Minnesota Vikings.

Cook is eighth in the league in rushing with 554 yards. He will be the fifth running back the Chargers have faced this season who's currently in the top 10.

“It’s a challenge like it is every week. If we go out there and we stop the run and make them be one-dimensional — meaning, make them have to ball — we’ll be in a good situation,” said defensive tackle Linval Joseph, who played six seasons with the Vikings (2014-19).

Los Angeles is allowing 161.6 rushing yards per game, 24 yards more than the next-worst team. Opponents are averaging 5.03 yards per carry, and three players have rushed for 100 yards.

First-year coach Brandon Staley, who was hired after coordinating the Rams' top-ranked defense last season, said he believes his team can force more negative run plays on early downs. The Chargers have held teams to no gain or negative yards on 25 rushes on first and second down, tied for fourth fewest in the league.

“I think that we’re really learning a lot about our run front in terms of what fits them best. I think the last two weeks we really settled into how we want to play,” Staley said. “I think, up front, we’re really getting into a comfort zone, our second and third level into a comfort zone. Now, it’s just taking that growth and improvement to the game and being even more aggressive on first and second down.”

The Chargers, though will have their challenges stopping Cook, who is expected to play despite facing a lawsuit from a former girlfriend, who alleges Cook assaulted her during an altercation at his home last year. Cook's attorney said his client was assaulted by the woman and had the right to defend himself.

Cook has posted two 100-yard games in his last three contests. Safety Derwin James, Cook’s former teammate at Florida State, said Cook is a “home run hitter from anywhere on the field,” while Staley said his biggest asset is getting to top speed quickly.

“He has pace. He has vision. When he sees it, he’s gone,” Staley said. “You’re just holding your breath sometimes like, ‘Oh boy, there he goes.’ He’s a big-time factor in the screen game, in the receiving game. He’s a complete runner that way. He’s as good as there is in the league.”

Staley believes his defensive line has improved its understanding of formations and technique in recent weeks. Besides getting more negative plays, he wants to see his team do a better job defending quarterback scrambles, which was in issue during last Sunday's win at Philadelphia.

“We need to do a better job on the loose plays. But, in terms of the actual run-front defense, we’ve made big strides the last two weeks,” Staley said.