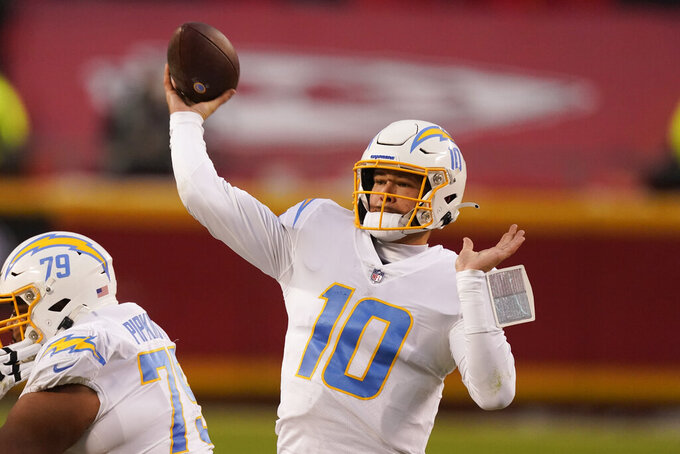 Justin Herbert has had a busy four weeks since the Los Angeles Chargers ended their season but he already has set his sights on what will be another transitional offseason for him.

For the fourth time as a college or NFL quarterback, Herbert will spend an offseason learning a new playbook and system. The Chargers hired Brandon Staley as coach on Jan. 17 after firing Anthony Lynn a day after the season finale.

Staley made it a point during his introductory news conference to say he had talked to Herbert twice since being named coach. Herbert said the calls left a positive impact.

“To be as busy as he was with everything going on, he reached out to me and that meant a lot to me,” said Herbert, who on Thursday was named the Pepsi Zero Sugar NFL Rookie of the Year, an award based on fan voting. “We kind of just talked about what he saw going forward. I know that talking about the offense and about all that stuff is coming up soon.”

Herbert has started watching tape of the New Orleans offense from previous seasons to get a better feel for what new offensive coordinator Joe Lombardi might install. Herbert also thinks the transition might be easier because John Beck — whom Herbert trains with in Huntington Beach, California — has worked with Drew Brees in the past.

As for the constant changes, Herbert hopes this is the last one for a while.

“I’ve been through this before. It would be great to have one playbook throughout your career but it’s not going to always happen like that,” he said. “I think it’s a great opportunity to learn. You always learn from each playbook. I think you have a great understanding of the game of football the more you go through it. I’ve had the opportunity to learn from so many different guys and philosophies and I think that’s helped my game. Hopefully, this is the last change that I’ll go through because I really believe in those two guys.”

Herbert, who was the third quarterback taken and the sixth player overall in last April’s draft, could become only the second player in franchise history to win AP Offensive Rookie of the Year when it is announced Saturday during the NFL Honors show. A Charger has won it on the defensive side three times. Herbert set rookie passing records for touchdowns (31) and had the second-most passing yards at 4.336.

Since the Chargers faced both Tampa Bay and Kansas City this season, Herbert has a unique view of Sunday's Super Bowl matchup.

“Those are two teams that have arguably the two best defenses in the league and I don’t think they get enough credit as they deserve,” he said. “Whether it’s (Kansas City safety) Tyrann Mathieu or (Tampa Bay safety) Antoine Winfield, you got a bunch of guys on both sides of the ball that you need to be looking out for and two pretty incredible quarterbacks as well. So regardless of what happens, I know it’s going to be an incredible game.”