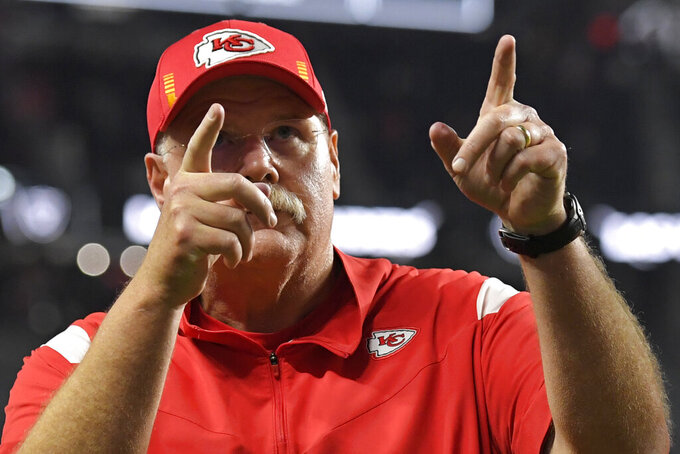 KANSAS CITY, Mo. (AP) — The Chiefs activated running back Clyde Edwards-Helaire from injured reserve, giving him a good chance of playing for the first time since Week 5 when Kansas City plays the Dallas Cowboys on Sunday.

The move Saturday was widely expected after Edwards-Helaire spent most of the past two weeks practicing. He hurt his ankle against the Bills and was designated to return last week against the Raiders but sat out another game.

“He had a good week of practice,” Chiefs coach Andy Reid said Friday.

Darrel Williams has been the primary running back with Edwards-Helaire on the shelf. But despite catching nine passes for 109 yards and a touchdown against the Raiders, Williams has just 343 yards rushing on 95 attempts; Edwards-Helaire has 304 yards on 65 attempts to remain second on the team in rushing.

Williams is likely to return to his role as Edwards-Helaire's backup, particularly on third downs.

“The thing that we know about Darrel, he’s a good football player. He’s smart, he’s instinctive, he’s tough — he’s just a jack of all trades,” Chiefs offensive coordinator Eric Bieniemy said, “and it’s not surprising that when given these opportunities, he’s having the success that he’s having. He’s just a steady, consistent football player who understands that, ‘Hey, when that opportunity comes, I’ve got to make the most of it.’ It is uplifting to watch, not only as a coach but as a team.”

Edwards-Helaire, a former first-round pick, nevertheless should provide a big boost to a Chiefs offense that finally showed some signs of life in Las Vegas. Patrick Mahomes shook off the worst two-game slump of his career as a starter to throw for 406 yards and five touchdowns without an interception in a 41-14 victory over the Raiders.

The win pushed the Chiefs (6-4) back into first place in the AFC West with the Cowboys (7-2) coming to town.

“I’ve been really encouraged by the performance of the team over the last few weeks, particularly in Las Vegas. It was good to see the offense get back in sync,” Chiefs chairman Clark Hunt said this week. “On the defensive side, the gradual improvement that we’ve made over the last five weeks has reminded me a little of the improvement the defense made in 2019,” when the Chiefs ended a 50-year championship drought by beating the 49ers in the Super Bowl.

“Obviously, we have a big game coming up this weekend,” Hunt added, “and then after the bye we have a number of games against our AFC West opponents, which will be very important.”