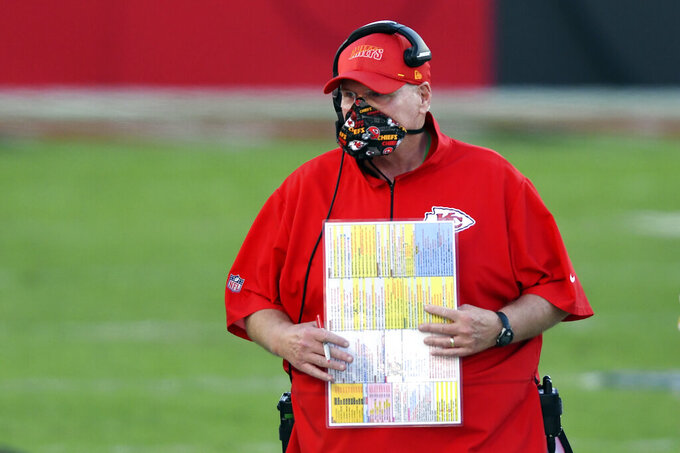 KANSAS CITY, Mo. (AP) — Andy Reid was gushing after watching his Kansas City Chiefs beat Tom Brady and the Tampa Bay Buccaneers, and for good reason: Patrick Mahomes and Tyreek Hill had an eye-popping day and the defense came through in the clutch.

The Chiefs coach also acknowledged there is plenty of room for improvement.

The reigning Super Bowl champions were penalized 10 times for the second consecutive week, and were flagged eight times the week before that. They were 0 for 3 converting touchdowns in the red zone, including one instance in which they threw a pair of incomplete passes from the half-yard line and had to kick a field goal. And that defense also gave up more than 400 yards, including Brady's line of 345 yards passing and three touchdowns.

Talk about a buzzkill. Or a reality check.

“I was proud of our guys for stepping up, particularly after an emotional game like the Raiders game. That's a difficult thing to do,” Reid said following the 27-24 victory Sunday, which pushed the Chiefs to 10-1 this season. “Obviously there's things we can get better at, but it was a heck of a performance by our guys.”

Especially by the offense — red zone performance notwithstanding.

Start with Mahomes, who was 37 of 49 for 462 yards with three TDs and no interceptions. He passed Bill Kenney for third in franchise history with his 106th touchdown throw, stretched his franchise record to 21 straight games with a TD pass and is now the only player in league history with at least 30 completions and 300 yards passing in four straight games.

“I think it's just taking what's there,” Mahomes said. “That's just the maturity of this offense as a whole, of knowing how to run routes based on the coverages they're getting, and I try to get them the ball to make plays.”

His favorite target was Hill, who had 13 catches for 269 yards and three touchdowns. The receptions tied for second most in Chiefs history, and the yardage trailed only Stephone Paige, who had 309 yards receiving against San Diego in 1985.

The superlatives could go on, but given all those gaudy numbers it's hardly a surprise that Reid was gushing after the game.

“I felt like we played well. It's always tough to go on the road and play against a quality team, and not just a quality team — these guys have weapons all over the place,” Chiefs safety Tyrann Mathieu said.

“We did a great job of playing our style of football. There were a couple of drives we'd like to have back ... but I'm proud of the way we bounced back, coming off the Raiders game. There were a lot of opinions about us and we forgot about all that. It was all about us.”

The Mahomes-to-Hill connection has been working for a while. Hill has eclipsed 100 yards receiving in three straight games, matching the third-longest streak in Chiefs history, and he's caught a touchdown pass in five consecutive games.

“I feel like there's still a lot of work for me to do,” said Hill, who leads the league with 1,021 yards and 13 TDs receiving. “I missed a few plays that I could have made, the one Pat threw to me on the wheel — I could have made that play.”

The Chiefs have struggled to cover tight ends this season, and that has become especially apparent in the past couple of weeks. Darren Waller had seven catches for 88 yards and a score for Las Vegas, and Rob Gronkowski had six catches for 106 yards for Tampa Bay.

Sammy Watkins returned to the field for the first time since hurting his hamstring against the Raiders in Week 5. He only caught four passes for 38 yards, but the attention he demanded helped to allow Hill and tight end Travis Kelce to have big days. Kelce finished with eight catches for 82 yards.

Mecole Hardman has just four catches over the past two games and he dropped what would have been a walk-in touchdown pass. His drop rate of 12.8% is better only than Tampa Bay's Leonard Fournette among 154 qualifying players.

9 — That's the number of consecutive road games won by the Chiefs, whose last loss away from Arrowhead Stadium came against the Los Angeles Chargers on Nov. 18, 2019, in Mexico City. That is tied for the longest streak in club history.

The Chiefs play their first home game in nearly a month against Denver on Sunday night.