Chiefs doomed by simple mistakes in loss to Las Vegas 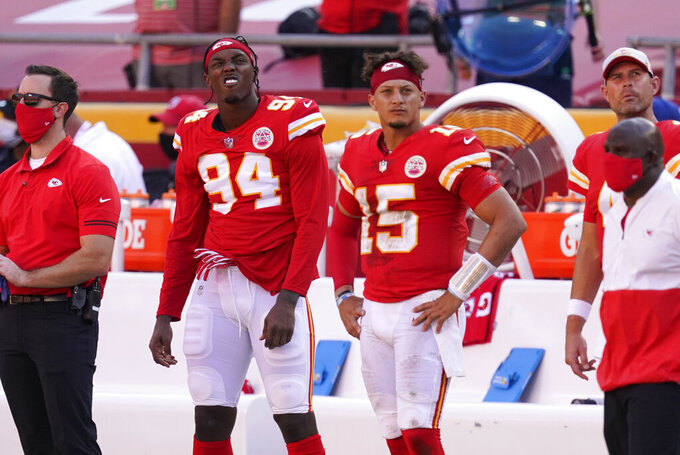 Kansas City Chiefs defensive end Taco Charlton (94) and quarterback Patrick Mahomes (15) watch from the bench during the second half of an NFL football game against the Las Vegas Raiders, Sunday, Oct. 11, 2020, in Kansas City. The Raiders won 40-32. (AP Photo/Charlie Riedel)

KANSAS CITY, Mo. (AP) — Patrick Mahomes has quickly earned a reputation for pulling off the seemingly impossible, whether it's a no-look pass or a 70-yard heave or merely leading the Kansas City Chiefs to victory when all hope seems lost.

It was the Chiefs' inability to execute the simple stuff that hurt them against the Las Vegas Raiders.

“We have to go back and look at ourselves in the mirror, and me at quarterback, and not rely on these crazy plays and just run the play like it's called,” Mahomes said after the 40-32 loss snapped a franchise-record 13-game winning streak. “We tried to battle at the end but if you don't play at a high enough level against a good team you're going to lose.”

Mahomes still threw for 340 yards and two scores, despite spending most of the sun-splashed Sunday afternoon running from the Las Vegas pass rush. But after playing to a 24-all draw at halftime, the Chiefs offense was shut out in the third quarter and struggled much of the fourth, allowing the Raiders to score 16 consecutive points and gain control.

Mahomes tried to lead the Chiefs on another remarkable comeback, driving them 75 yards in just 1:29 before hitting Travis Kelce with a touchdown throw and Darrel Williams for the 2-point conversion. But their defense was unable to get the ball back in the final minutes, and the Chiefs lost to the Raiders at home for the first time in eight years.

“Any time you're going backwards, holding calls, things of that nature, it doesn't give you a chance to succeed, especially in this league,” Chiefs right tackle Mitchell Schwartz said. “We have to be better. We know that.”

Penalties were an issue. The Chiefs were flagged eight times for 94 yards, and two of them were particularly costly.

The first came on their opening drive, when Kelechi Osemele was called for holding to negate a 58-yard touchdown strike to Tyreek Hill and ultimately leading to a punt. The second came late in the first half, when Kelce's pass interference call took away a touchdown catch by Clyde Edwards-Helaire and eventually forced a field goal instead.

“We hadn't had all these penalties. That was new,” said Chiefs coach Andy Reid, whose team hadn't lost since visiting the Titans in Week 10 of last season. “And then we haven't really given up that many big plays. Those things we have to make sure we clean up. When you narrow it down, that's the problem.”

Indeed, the Raiders shredded the last NFL defense to allow more than 20 points in a game this season. Nelson Agholor split the Kansas City secondary to haul in a 59-yard touchdown catch in the second quarter, Darren Waller was open in the back of the end zone for another score, and Henry Ruggs III ran right by Charvarius Ward for a 72-yard TD catch.

Lest anyone put the blame entirely on the secondary, the Chiefs' defense front was unable to generate any pressure on Raiders quarterback Derek Carr, nor could they stop Josh Jacobs from bulldozing for two fourth-quarter touchdowns.

“You got to give those guys credit. They get paid, too,” Chiefs safety Tyrann Mathieu said. “Thought their coaches did a good job of catching us in certain coverages, certain calls. They schemed us up. We'll improve from it.”

The Chiefs at least have a few extra days to do it. Their road game against the Bills originally scheduled for Thursday night was moved to Monday night in the NFL's massive COVID-19 scheduling shakeup earlier in the day.

“We haven't lost a football game in a while. It's good to have some motivation,” Mathieu said. "So going forward we’re going to lean on it. We're not going to forget this game.”