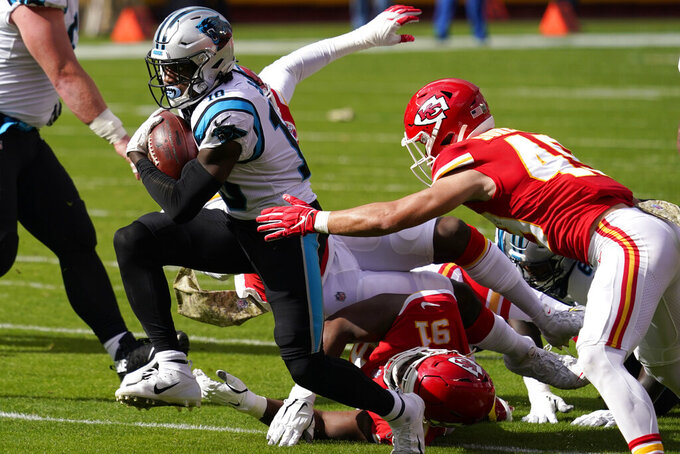 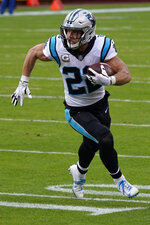 KANSAS CITY, Mo. (AP) — Patrick Mahomes was just goofing around during a special teams segment of practice when he dreamed up this audacious play in which he'd put himself in motion, then take the snap and look downfield for a wide receiver.

Chiefs coach Andy Reid liked it so much that he put it in the game plan.

The play, which Mahomes called “Ferrari right,” wound up going for a first-half touchdown against Carolina on Sunday, and was merely one highlight in a game full of them.

Mahomes finished with 372 yards passing and four touchdowns, most of that offense going to Tyreek Hill and Travis Kelce, and the Chiefs survived the Panthers' late comeback attempt for a 33-31 victory when kicker Joey Slye missed a 67-yard field-goal attempt wide right on the final play.

“The last three weeks Pat's been messing around with it,” Reid said of the newfangled play, “so I told him, ‘We’re going to put it in.' He looked at me like I was crazy. He'd been doing it and it looked good, so let's try it. So we tried it.”

That touchdown — all of them, really — wound up being crucial to the outcome.

The Chiefs (8-1) were left clinging to the lead when Christian McCaffrey, just back from his ankle injury, scored from a yard out with 1:26 to go. The Panthers' onside kick was recovered by Kansas City, but they used their three timeouts to get the ball back, and Teddy Bridgewater's 23-yard pass to Curtis Samuel with 9 seconds remaining gave them hope.

Carolina (3-6) tried to get a bit closer with a pass to McCaffrey, but the incompletion brought on Slye, who had plenty of leg with the wind behind him. His kick dropped just outside the uprights, though, allowing the Chiefs to escape.

“We came here to get a win,” Panthers coach Matt Rhule said, "and we played that way.”

McCaffrey finished with 18 carries for 69 yards and a touchdown while catching 10 passes for 82 yards and another score. Bridgewater threw for 310 yards and two TDs with Samuel catching nine balls for 105 yards and the other score.

Kelce had 10 catches for 159 yards and Hill had nine for 113 and a pair of scores, helping the pass-happy Chiefs climb out of an early 14-3 hole and head into their bye with a bunch of new milestones and a big surge of momentum.

The win was the 230th for Reid, breaking a tie with Hall of Fame coach Curly Lambeau for fifth most in NFL history. It was the 23rd straight game the Chiefs have scored at least 23 points, breaking their own NFL record, and Mahomes beat Hall of Famer Dan Marino’s mark for fewest games to 100 career touchdown passes — Mahomes did it in 40, Marino in 44.

“I think you're seeing the best of him right now,” Reid said, “and some of it you might not see, the things he does behind the scenes, whether its look-offs, the small subtle things. Little intricacies of the offense and how he handles it.”

It was clear from the start the Panthers were happy to have McCaffrey back on the field.

The Panthers drilled deep into the playbook, too. There was a hook-and-ladder play that set up a field goal late in the first half, and a fake punt that gave Carolina a first down and ultimately led to a touchdown and a 14-3 lead.

The Chiefs probably should have been ready for that one. Not only did the Panthers pull off a fake against the Falcons last week —that was Jeremy Chinn taking a direct snap rather than punter Joseph Charlton throwing to wide receiver Brandon Zylstra on Sunday — but Kansas City also executed a faked punt of their own against the New York Jets in Week 8.

The Panthers still led 17-13 after the teams traded missed field goals to start the second half, but the Chiefs finally hit their offensive stride. Mahomes hit Clyde Edwards-Helaire's TD catch late in the third quarter, then found Hill early in the fourth.

Bridgewater answered for Carolina by running for 15 yards on fourth-and-14, a scramble that ended with his cart-wheeling dive for a first down, then taking a quarterback draw 4 yards for a touchdown to get within 26-24 with 10:22 to go. But rather than kick it deep, the Panthers tried an onside and recovered it too early, and the Chiefs used the short field to set up Hill's second touchdown catch and stretch the lead again.

Panthers: LT Russell Okung (calf) and SS Jeremy Chinn (knee) were inactive. ... McCaffrey appeared to get dinged on the ribs late in the game, though he was still on the field for the plays that mattered.

Chiefs: RT Michell Schwartz (back) and WR Sammy Watkins (hamstring) were inactive. ... DT Taco Charlton left in the first half with an ankle injury. RT Mike Remmers left early in the second with a rib injury.

Chiefs: Off next week before visiting the Las Vegas Raiders on Nov. 22.