Chiefs’ Mahomes views bye as chance to finally get healthy 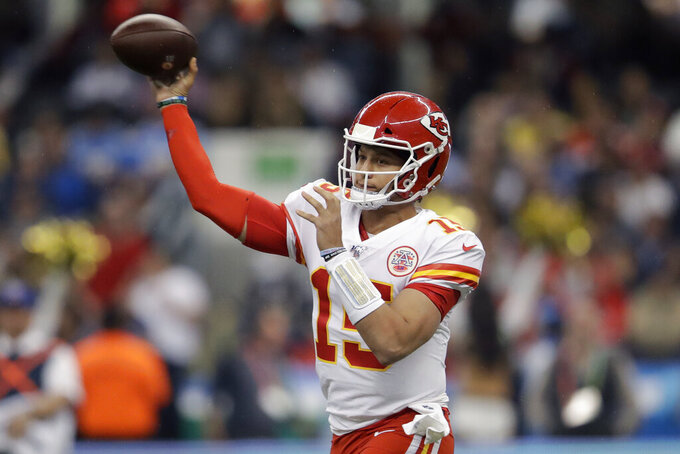 KANSAS CITY, Mo. (AP) — Patrick Mahomes grew up in baseball clubhouses as the son of a big league pitcher, then gravitated toward football and began making his mark on high school football fields all across Texas.

He continued to make his mark in college and now the NFL.

But strangely enough, the comparisons that people are making to the Kansas City Chiefs quarterback these days have nothing to do with baseball or football. They have to do with basketball.

Chiefs chairman Clark Hunt recalled the heady days of Michael Jordan with the Chicago Bulls — his family still retains an ownership stake in the franchise — and how His Airness turned the NBA team into a global brand. Hunt sees similar characteristics in his brilliant young quarterback.

“When you have a successful team, that helps. And obviously when you have a star player, that also helps,” Hunt said. “Michael did a lot to grow their brand not only nationally but on an international basis. To some degree, Patrick gives us that same opportunity.”

On the field, Mahomes’ cool demeanor, improvisational skills and ability to do things with a ball that others only dream of have prompted comparisons to Golden Star Warriors star Steph Curry.

“It’s obviously really cool and amazing to be compared to someone like that,” said Mahomes, who has guided the Chiefs into their bye week at 7-4 and in control of the AFC West.

“For me,” Mahomes continued,” I have so much longer to go getting anywhere near that level. Those guys have been consistent and great every single year and for their entire career, and for me, I’m just getting started and I understand that. I obviously love to hear it and love to see it, but I know I have so much to prove to even get anywhere near that.”

Mahomes shattered just about every franchise passing record in his first season as the starter, leading the Chiefs to the AFC title game and taking home the league’s MVP award.

And while his follow-up season may not have the same eye-popping numbers, an argument could be made that the precocious son of longtime big leaguer Pat Mahomes has been even better this season.

In parts of nine games, Mahomes has thrown for at least three touchdowns five times. He’s leading the league in yards per attempt, third in yards per game and the same in quarterback rating. And he’s only thrown two interceptions, tied with Russell Wilson and Aaron Rodgers for best in the NFL.

He’s still making the did-you-see-that no-look throws. Jump passes are still in his arsenal. He can still deliver the ball with incredible velocity and accuracy with just about any arm angle, whether he’s in the pocket or on the run, under pressure or with plenty of time to survey the field.

“Everything you read about him is true,” Ravens defensive coordinator Don Martindale said. “You defend the first play, then the second play during that first play is when he extends the play. That’s where he makes some of his unbelievable plays.”

Those things are all easy to see, though. Less obvious are his improved decision-making and leadership — the latter in part a natural byproduct of having a successful season under his belt.

To a man, the Chiefs acknowledge they would follow Mahomes just about anywhere.

“We see it all week during practice,” Chiefs wide receiver Sammy Watkins said. “This is the time where people be like, ‘Oh, wow!’ But all week he goes through practice, he tries these hard throws and he’s literally on point. We just looking like, ‘Oh yeah, that’s just Pat being Pat.’”

Making his performances this season more remarkable? Mahomes hasn’t been healthy since Week 1.

He sprained his ankle in the Chiefs’ season-opening win in Jacksonville, then aggravated it a couple of more times but never missed a game. Then in Denver, on a seemingly innocuous quarterback sneak, Mahomes dislocated his kneecap and wound up missing the next two games.

He returned to throw for 446 yards and three touchdowns in a shootout loss at Tennessee.

Mahomes was solid again last week in Mexico City, leading the Chiefs to an important win over the division-rival Chargers. He only threw for 181 yards with a touchdown and an interception — modest and unspectacular by his standards — but he ran for a big first down and made the plays that mattered.

Now, he gets to enjoy a long-awaited bye and get a bit healthier for the stretch run.

That bodes well for the Chiefs. Not so much for the teams on their remaining schedule.

“Yeah, listen, I think he’s been feeling better — physically feeling better,” Chiefs coach Andy Reid said. “He’s been kind of battling through the injury and I think starting kind of mid-week (last week), I mean, he was going, ‘Man, I’m feeling better here,’ and I think that sure paid off.”