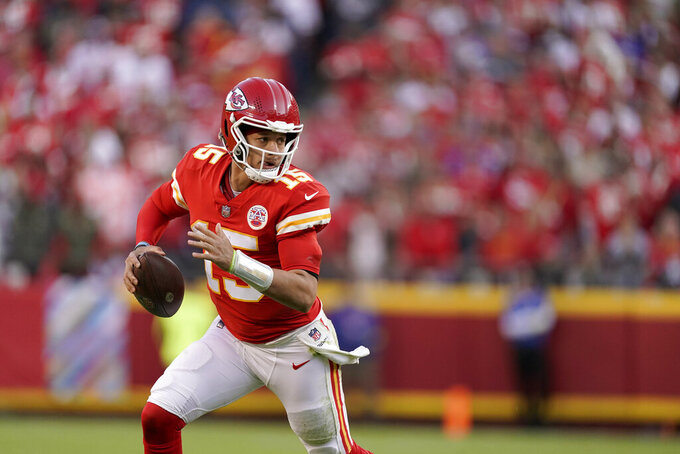 OPENING LINE: Chiefs by 3, according to FanDuel Sportsbook.

TURNOVER DIFFERENTIAL: Chiefs minus-1, 49ers minus-2.

CHIEFS PLAYER TO WATCH: QB Patrick Mahomes. Mahomes' late-game heroics led the Chiefs to the Super Bowl victory when they last played the 49ers following the 2019 season. Mahomes has thrown four INTs this season with two coming when trying to lead a game-winning drive in losses to Indianapolis and Buffalo.

49ERS PLAYER TO WATCH: QB Jimmy Garoppolo. The Niners will likely need a big performance from Garoppolo in order to keep up with the Chiefs. Garoppolo threw two INTs last week, but was also hurt by a pair of drops on long passes. His 296 yards passing last week were his most in a game this season.

KEY MATCHUP: Chiefs DT Chris Jones vs. 49ers interior line. Jones has been his disruptive self this season and provides a tough challenge for San Francisco's inexperienced interior linemen. Jones had three batted passes in the Super Bowl win over the Niners.

KEY INJURIES: The Chiefs could get first-round pick Trent McDuffie and linebacker Willie Gay Jr. back. McDuffie hurt his hamstring in the opener against Arizona and the cornerback returned to practice last week. Gay just concluded a four-game suspension for an off-the-field incident that happened earlier this year. ... The Niners hope to get DE Nick Bosa (groin), LT Trent Williams (ankle) and S Jimmie Ward (hand) back this week. ... DL Arik Armstead (foot, ankle) remains sidelined.

SERIES NOTES: Kansas City rallied from a 10-point deficit to beat San Francisco 31-20 in the Super Bowl following the 2019 season. ... The Chiefs won the only other matchup during Mahomes' tenure, beating the 49ers 38-27 in the 2018 season. San Francisco QB Jimmy Garoppolo tore his ACL in that game. ... Kansas City's only road win in the series was a 26-17 victory in 1971 at Candlestick Park.

STATS AND STUFF: The Chiefs have gained at least 300 net yards in 11 straight games, tying the fourth-longest streak in franchise history. The record is 18 straight during the 2017-18 seasons. ... Kansas City has kicked at least one field goal in a club-record 19 straight games. That includes Harrison Butker’s team-record 62-yarder last week against Buffalo. ... Chiefs TE Travis Kelce had eight catches for 108 yards against the Bills. That moved him past Greg Olsen and into fifth among tight ends with 745 receptions. Next is Shannon Sharp with 815. ... Kelce has caught a pass in 132 straight games, breaking Tony Gonzalez’s club record. He is four behind the longest active streak of the Cardinals’ DeAndre Hopkins, who returns this week from a six-game suspension. ... Chiefs WR JuJu Smith-Schuster had five catches for 113 yards and his first TD reception with Kansas City last week. ... San Francisco has scored on 29.2% of drives this season, fifth worst in the NFL. ... The 49ers are 0-26 under coach Kyle Shanahan when trailing by at least five points at the start of the fourth quarter. ... The Niners failed to score in the second half last week for the first time with Jimmy Garoppolo at QB. ... San Francisco has at least one sack in 36 straight games, including the playoffs. That’s the fifth-longest streak since 2010. ... The Niners have four players (Bosa, Samson Ebukam, Drake Jackson, Charles Omenihu) with at least three sacks through six games for the fourth time in franchise history. ... San Francisco allowed Atlanta to convert 9 of 14 third downs last week. ... The Niners have allowed only 52 plays of at least 10 yards, fewest in the NFL.

FANTASY TIP: Niners WR Brandon Aiyuk is coming off his most productive game of the season with eight catches for 83 yards and a career-high two TDs. That could earn him even more looks this week.