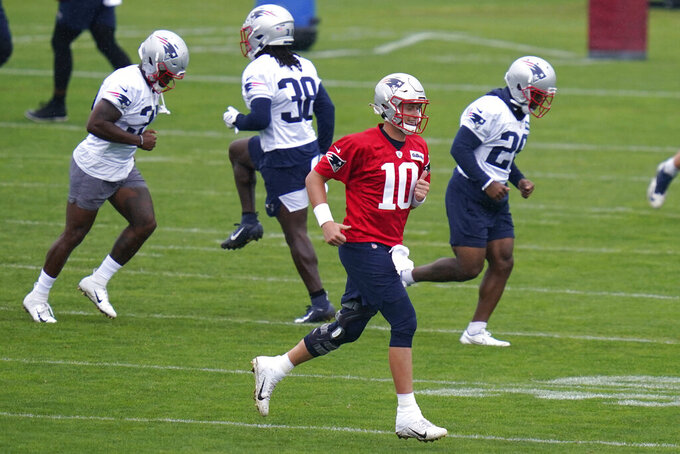 FOXBOROUGH, Mass. (AP) — Mac Jones spent most of his college career at Alabama watching from the sideline — first behind Jalen Hurts and then backing up Tua Tagovailoa.

Hurts was first to join the Crimson Tide program in 2016, followed by Jones and Tagovailoa in 2017. By the time they finished their respective runs in Tuscaloosa, each had been the starter on a national championship team.

For Hurts and Tagovailoa, it was the expected outcome for two highly touted recruits coming out of high school.

For Jones, who had to beat out freshman Bryce Young for the starting job last season on his way to becoming the school’s all-time single-season passing leader and leading Alabama to an undefeated record, it was another example of him exceeding outsiders' expectations.

Now as Jones and Tagovailoa prepare to matchup for the first time as NFL starters on Sunday, it has cast a new spotlight on the former teammates in their new roles as key pieces of franchises hoping to dethrone the Buffalo Bills in the AFC East.

“Looking back on it, it was pretty cool. We were all pretty close. We were there to help each other,” Jones said. “I guess that’s all in the past and we’re all doing our own thing now.”

In Jones’ case, that included beating 2015 NFL MVP Cam Newton for the Patriots’ starting job. Bill Belichick’s decision to cut Newton at the end of training camp came as a shock to many around the league.

Jones’ teammates said he enters his first start having won the respect of New England’s locker room with poise and confidence rarely displayed by a rookie.

“I tell him he’s not a rookie. This is his offense and to lead it as such,” Patriots offensive lineman Trent Brown said. “We go as he goes.”

Tagovailoa said Jones' fast ascension lines up with the potential he saw him display in college.

Both will lead revamped rosters.

Belichick said it has made Tagovailoa, the first rookie quarterback to win against him since 2013, more formidable.

“Tua is no rookie,” Belichick said. “He’s got a year of experience. We’ve seen him. We played against him, so we’ll deal with him.”

As he prepares for his third season in Miami, he has put most of the nostalgia behind him.

“I’m a Miami Dolphin. That’s where I’m at,” Flores said. “When we go up there, we’re going up there to play a tough competitive team and we’re going to compete as well. It’s a road game in a tough environment against a good team that’s well coached. We’ve got to prepare the right way to have some success. No, there is no nostalgia or anything like that.”

Twins Devin and Jason McCourty lived out a childhood dream when they became teammates in New England in 2018, ending that season celebrating a Super Bowl win.

The run ended this past offseason when Jason left in free agency to join the Dolphins and Flores. Like his new coach, Jason said this week hasn’t featured much reminiscing.

“I would be more excited if I could see his kids, but I won’t get a chance to see his kids. Him, eh, he’s all right,” Jason said with a laugh.

Jokes aside, Devin said even as opponents they will continue to savor being on the field together.

“We’ve had a lot of fun playing together the last three years," he said. "But taking the field together as opponents, any time just being together living out this dream, we know it’s dwindling down. So, I think Sunday’s going to be a lot of fun.”