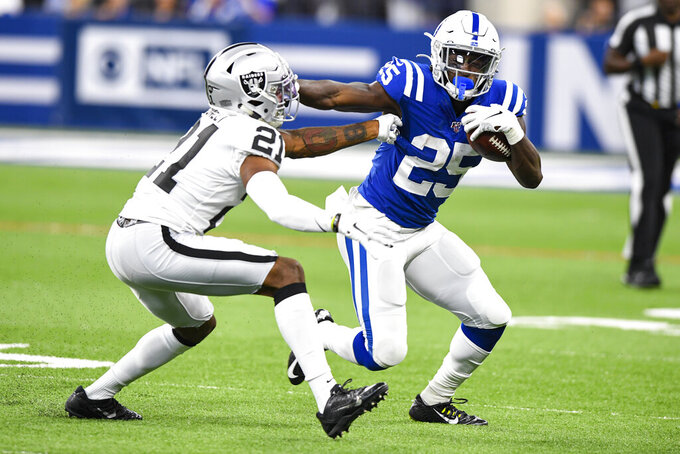 After three solid games to start the season and a sharp week of practice, one of the league's least-mistake prone teams couldn't do much right in a 31-24 loss to the Oakland Raiders.

"I was really surprised, really shocked. There was something missing," Reich said. "We talk about keeping an edge and obviously we didn't have that tonight from me on down."

As a result, the Colts' seven-game home winning streak is history, Oakland (2-2) has its first road win in the series since 2001 and Indy will spend this week searching for answers.

What went wrong? What didn't?

Sure, Indy again played short-handed. Their opening-day starters at receiver T.Y. Hilton, a four-time Pro Bowler, and Devin Funchess both missed the game with injuries. Receiver Parris Campbell left briefly in the second half with an abdominal injury and a fourth receiver, Chester Rogers, went to the sideline late in the fourth quarter after taking a big blow to his midsection.

But they overcame a long list of injuries in last week's victory over Atlanta.

Offensively, the Colts were done in by a series of dropped passes, drive-killing penalties and turnovers. And defensively, they struggled to get off the field.

"I think when you look at the stat sheet, it wasn't about them it was about us," Brissett said, referring to the offense. "We had missed assignments — all 11 of us — penalties in critical situations. I think that was the deciding factor."

Even Brissett was part of the problem.

After the Colts cut the deficit to 24-17 and the defense finally forced a punt with 2:28 left, Brissett acknowledged he made a poor decision by throwing the ball to Zach Pascal as Raiders safety Erik Harris jumped the route. Harris snared the ball in front of Paschal and jogged 30 yards for a touchdown to make it 31-17.

It was the second costly turnover for Indy, which doubled its turnover total from the first three weeks combined. Campbell lost a fumble at the Raiders 15-yard line late in the first half.

Brissett wound up 24 of 46 with 255 yards, three touchdowns and his second interception of the season while the Colts only rushed for 81 yards on 23 carries.

"It's hard to explain," Reich said when asked about the sloppiness. "That has not been indicative of our offense. We've had very few drops, very few penalties and today was hard to swallow."

There also are concerns on defense.

For the second straight week, the Colts failed to generate a consistent pass rush and they couldn't stop the run.

He led the Raiders (2-2) to touchdowns on three of their first four drives and took Oakland on a 16-play, time-consuming drive to start the second half and extend the lead to 24-10. Carr finished 21 of 31 with 189 yards and two touchdowns on a day the ground game churned out 188 yards on 32 carries including a 60-yard TD run by receiver Trevor Davis in the first quarter.

"There were a couple plays that should have been even bigger plays, to be honest," Carr said. "We felt bad as an offense for our defense. We shouldn't have had it that close for them."

The Colts, meanwhile, must find solutions before heading to Kansas City next week.

"I've always felt — last year and going into this year — that teams can't run the ball on us. We don't let teams run the ball," Reich said. "We've got to look at that and see what we can do better as coaches and players to have a better run defense."