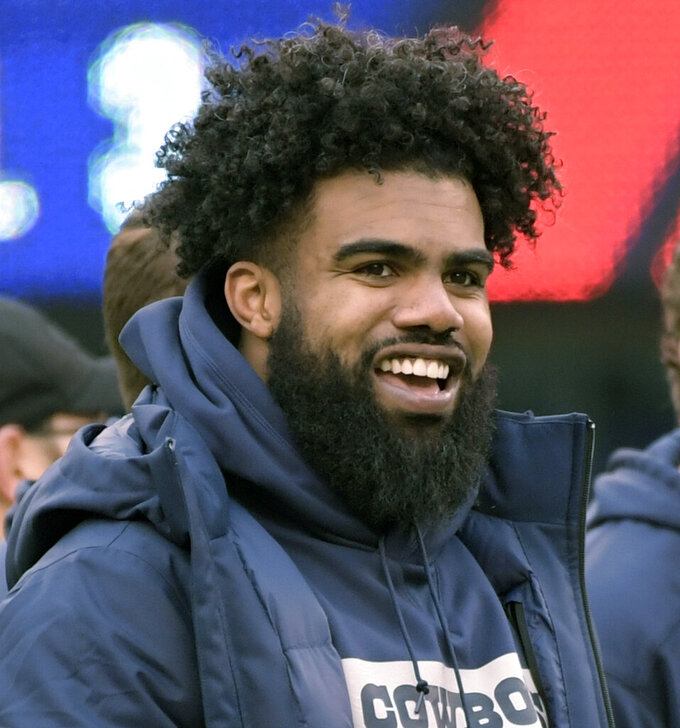 FILE - In this Dec. 30, 2018, file photo, Dallas Cowboys' Ezekiel Elliott smiles on the sideline before an NFL football game against the New York Giants, in East Rutherford, N.J. Elliott was handcuffed by police, but not arrested, after a scuffle involving event staff at a Las Vegas music festival. Police Officer Laura Meltzer said Monday, May 20, 2019 that the 23-year-old running back was detained briefly early Saturday during the Electric Daisy Carnival at the Las Vegas Motor Speedway. (AP Photo/Bill Kostroun, file)

The 23-year-old running back was detained briefly about 3 a.m. Saturday near a gate to the overnight Electric Daisy Carnival at the Las Vegas Motor Speedway after police officers saw him "push a security officer to the ground," Officer Laura Meltzer said in a statement.

"The security guard who was the victim of the misdemeanor battery refused to press charges," the statement said, and the officers released Elliott. He was not charged with a crime.

Cellphone video posted by celebrity website TMZ appeared to show Elliott speaking with a woman and then with several security and event staff members, including one who falls backward over a metal parking area barricade before police arrive. Elliott is handcuffed and led away.

Elliott's agent Frank Salzano said Monday that Elliott was released shortly after the video ends; that event security misconstrued the situation and overreacted; and that Elliott left Las Vegas for Dallas to be at his youth football camp on Sunday. The agent identified the woman in the video as Elliott's girlfriend.

Salzano declined to respond to the police statement.

"The video speaks for itself," he said.

Elliott has twice led the NFL in rushing since being drafted in 2016. He has 4,048 yards rushing and 28 TDs on the ground over his three-year career.

He was suspended by the NFL in 2017 for six games for violating the league's personal conduct policy after an investigation of allegations he had several physical confrontations in the summer of 2016 with his girlfriend at the time.

Elliott denied the allegations, saying he was not an abuser, and fought the suspension for several weeks in several courts before finally serving the suspension.