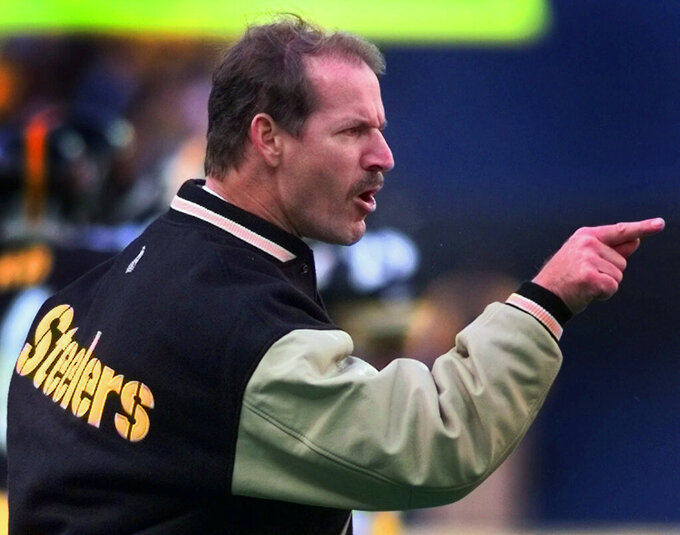 FILE - Pittsburgh Steelers coach Bill Cowher works the sidelines against the Cincinnati Bengals in Pittsburgh, in this Sunday Nov. 28, 1999, file photo. Cowher, who won 149 games and a Super Bowl in 15 seasons with the Pittsburgh Steelers from 1992-2006, will be inducted into the Pro Football Hall of Fame next month. (AP Photo/Gene J. Puskar, File)

On the surface, Bill Cowher looked like he wasn't ready to be an NFL head coach. Too young. Too anonymous. Too unproven.

So while the then-34-year-old Cowher might have been on the list to replace Chuck Noll following Noll's retirement after the 1991 season, thanks to the enthusiastic endorsement of mentor Marty Schottenheimer, he wasn't exactly at the top of it.

“We thought we were going to need somebody older,” said Art Rooney II, the team's vice president at the time Noll stepped away.

Yet there was something about Cowher's manner that stuck with Rooney and his father, team chairman Dan Rooney, as they set about finding someone to take over for the most successful coach in franchise history. The more the Rooneys talked to the former special teamer who grew up four miles from Three Rivers Stadium, the more they were won over by Cowher's combination of intelligence and charisma.

“You could see he was somebody who was going to be able to command the team, have the presence to stand in front of a group of twentysomethings every day and keep their attention,” said Art Rooney, now the team president.

That was something Cowher did for 15 seasons, 170 wins, one Super Bowl title and an appearance in another. His jaw jutting out from underneath a moustache that gave him an everyman blue-collar vibe, Cowher re-established the Steelers as one of the league's marquee franchises with a style as impassioned as Noll's was professorial.

“You know, you follow a guy like Chuck Noll, I don’t even think there’s any pressure, because you’re not even going to come close to doing what he did in terms of ... the run they had in the '70s, what he did for the city of Pittsburgh and rejuvenating that whole city,” Cowher said.

Maybe, but Cowher came pretty close. And 15 years after stepping away, Cowher will follow in Noll's footsteps once again when he is inducted into the Pro Football Hall of Fame next month.

Not bad for a former linebacker who spent his brief four-year NFL career in the early 1980s as a special teams ace who got by more on guile and innate football IQ than athletic ability.

“I just was very average skill set but I knew how to do all the little things to get by,” Cowher said. “And so, that was my idea. I was like a teacher. I always liked teaching. And teaching is finding a way to connect with your students, and those were the players, those were the coaches, and so I embraced it all."

Schottenheimer hired Cowher as an assistant in Cleveland in 1985 and the two headed west to Kansas City in 1989. Cowher spent two years as the defensive coordinator for the Chiefs, and when the Steelers started exploring who would lead them into the post-Noll era, Schottenheimer gave Cowher a rousing endorsement.

“Even though he was that young, Marty felt really good about him being ready to go,” Rooney said.

And he was. Cowher's impact on the Steelers was immediate. They made the playoffs in each of his first six seasons, reaching the 1996 Super Bowl before falling to the Dallas Cowboys.

Yet the standards for success in Pittsburgh aren't what they are elsewhere. The Steelers lost the AFC championship at home in 1994 and 1997. A 22-26 stretch around the turn of the millennium eroded confidence among the team's ardent fan base.

Cowher's bosses, however, were not concerned. Instead, they doubled down, offering him a contract extension.

“I can honestly say we never thought hard about letting him go at that point,” Rooney said. "It was a matter of just feeling like we would turn the corner and we’d work hard to get there to turn the corner.”

The Steelers returned to the playoffs in 2001 but found themselves repeating a familiar pattern. They dropped AFC championship games to Tom Brady and the New England Patriots in 2001 and 2004. Cowher remained upbeat, relying on the tenets that propelled him from Crafton, Pennsylvania to the top of his profession.

“We were going to be tough,” he said. "We were not going to beat ourselves. We’re going to come to work with our lunch pail every day and find a way to get it done.”

Finally, in 2005 they did. Pittsburgh entered the playoffs as the sixth seed. The Steelers drilled division rival Cincinnati in the first round, then used Ben Roethlisberger’s shoestring tackle of Colts defensive back Nick Harper to hold off Peyton Manning and Indianapolis. They dropped top-seeded Denver the following week to reach the franchise's sixth Super Bowl.

Two weeks later, Cowher — buoyed by a wide-receiver option pass from Antwaan Randle El to Hines Ward touchdown pass, the kind of risky call emblematic of Cowher's go-for-broke style — raised his arms triumphantly following a 21-10 win over Seattle that returned the Steelers to the top.

A year later, however, he was done at age 49. Cowher retired following the 2006 season to spend more time with his wife Kaye and their three daughters. Though his name has continued to be floated for vacant NFL jobs following Kaye's death in 2010 from skin cancer, Cowher has remained committed to his broadcasting job for CBS' “NFL Today” pre-game show.

Cowher misses the relationships and the challenge of navigating a season. He does not, however, miss the lifestyle.

“I have so much more balance in my life than I ever had,” he said. “I don’t think I’ll ever come close to going back.”