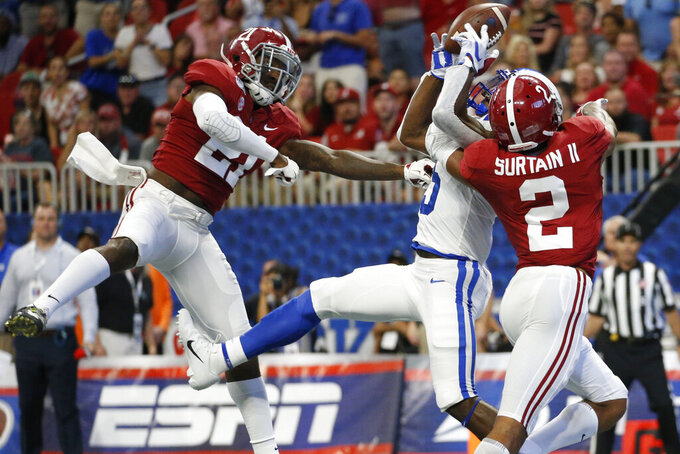 FILE - Alabama defensive backs Jared Mayden (21) and Patrick Surtain II (2) break up a pass intended for Duke wide receiver Jalon Calhoun (5) during the first half an NCAA college football game in Atlanta, in this Saturday, Aug. 31, 2019, file photo. The Cowboys should have their choice of cornerbacks after losing starter Chidobe Awuzie to Cincinnati in free agency, possibly grabbing his replacement to start alongside 2020 second-round choice Trevon Diggs. Former Alabama teammate Patrick Surtain II is a popular name in mock drafts.(AP Photo/John Bazemore, File)

The Dallas Cowboys signed their star quarterback to a long-term deal, which means they won't be in the market at that position with the 10th overall pick in the NFL draft.

Whether they take a potential backup to Dak Prescott is a question for the later rounds, leaving the focus once again on defense early — unless there's a repeat of 2020 with the unexpected availability of an offensive player they can't pass up.

The most likely candidate as another CeeDee Lamb, the receiver who was still on the board at No. 17 a year ago, is Florida tight end Kyle Pitts. The Associated Press All-American is projected to go several spots before the Cowboys are on the clock. Then again, so was Lamb.

“Barring something very opportunistic, we certainly want to improve our defensive football team,” executive vice president of personnel Stephen Jones said on his radio show recently. “You can always use help anywhere, whether it’s offensive line or anywhere else. But certainly this should be pushing some defensive football players our direction.”

What Jones means is that as many as five quarterbacks are expected to go in the nine picks ahead of Dallas.

The Cowboys should have their choice of cornerbacks after losing starter Chidobe Awuzie to Cincinnati in free agency, possibly grabbing his replacement to start alongside 2020 second-round choice Trevon Diggs. Former Alabama teammate Patrick Surtain II is a popular name in mock drafts.

The Cowboys don't appear to be favoring one position over another a year after going 6-10, allowing the most points in franchise history and firing defensive coordinator Mike Nolan, the most important hire for first-year coach Mike McCarthy.

Nolan was replaced by former Atlanta coach Dan Quinn, who got that job because of what he did with a Seattle defense that helped the Seahawks win the 2014 Super Bowl.

“I think defensively it’s across the board,” Jones said. “You can’t ever have enough defensive linemen. Certainly we lost Chidobe in free agency, and it’s our ongoing, annual need for safeties, which never seems to end in terms of draft pick resources or dollar resources.”

Xavier Woods, a three-year starter, also was among the seven players to leave in free agency, signing a one-year deal with Minnesota. Donovan Wilson's emergence as a starter helps Dallas, which signed four inexpensive safeties in free agency: Keanu Neal, Malik Hooker, Damontae Kazee and Jayron Kearse. Neal and Kazee had ties to Quinn in Atlanta.

That low-budget approach appears to leave an opening for a starter, particularly if the Cowboys invest a high-round pick on a safety. But they haven't drafted a safety before the third round in 19 years.

“We've made some pretty strong attempts to change that,” Jones said, alluding to attempts to trade for Earl Thomas and the pursuit of other veterans in free agency. “In the draft we’ve been right there and had safeties right there in the mix only to make a decision to take another position.”

Garrett Gilbert is under contract in 2021 after an impressive showing in his only start when Andy Dalton, last year's backup, was sidelined. Dalton signed with Chicago in an attempt to become a starter again.

Now the Cowboys have to decide whether to draft a quarterback to join Gilbert and 2020 seventh-rounder Ben DiNucci in the battle behind Prescott. DiNucci struggled badly in his only start as a rookie during Dalton's two-game absence.

While Pitts is a name connected to the Cowboys because of owner and general manager Jerry Jones' apparent fascination with his unique skill set despite greater needs on defense, all indications are he won't be around if Dallas doesn't move up from the 10th pick.

It wouldn't be wise to rule out other offensive players, though. Northwestern tackle Rashawn Slater is another name coming up in mock drafts for Dallas with seven-time Pro Bowl left tackle Tyron Smith having turned 30 and having played just two games last year before neck surgery. Right tackle La'el Collins had hip surgery and missed the entire season.

The Cowboys have 10 picks, including four compensatory selections from losing 2020 free agents such as cornerback Byron Jones (Miami) and defensive end Robert Quinn (Chicago). Four of their seven picks last year were on defense, and the focus on that side of the ball is even more acute now. Dallas needs defensive linemen and linebackers, too.

“I really don’t know that we have to necessarily say, ‘Hey, it’s gotta be skill or the front,’” Stephen Jones said. “But I think defensively we have to get better.”