Depleted Eagles get extra time to heal after comeback win 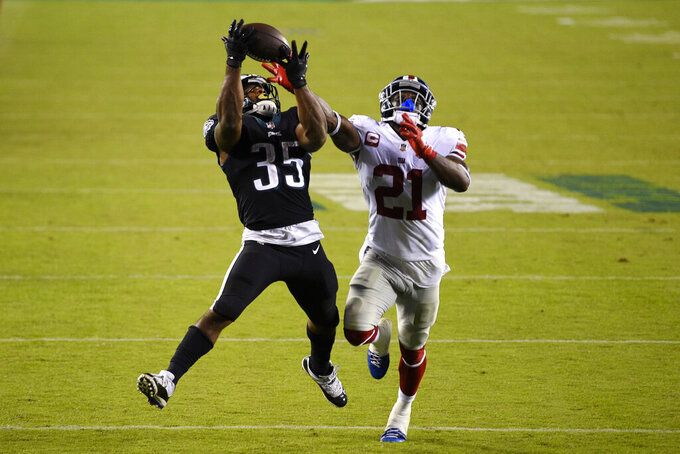 They’ll take any win they can get this season.

The Eagles (2-4-1) moved percentage points ahead of Dallas (2-4) in the NFC East and now have extra time to prepare for the Cowboys next week following a 22-21 comeback win over the Giants (1-6) on Thursday night.

Carson Wentz threw a pair of touchdown passes in the final five minutes to lead depleted Philadelphia, which again finished the game with two healthy starters on offense.

“Sitting on top of the NFC East is obviously a good thing,” coach Doug Pederson said Friday. “The fact that we were two scores down, came back and won this football game, that’s a huge positive. With the amount of injuries that have piled up on offense, it just shows the resiliency of the entire football team.”

Wentz and three-time All-Pro center Jason Kelce are the remaining starters from the projected lineup. Wide receiver DeSean Jackson returned after missing three games and suffered an ankle injury that will force him to miss significant time. Right tackle Lane Johnson came back from an ankle problem only to injure his knee. He’s day to day.

The Eagles have started 21 different players on offense, including 10 on the offensive line and seven guys who made their first career start. Establishing continuity has clearly been a problem.

“It can be a challenge at times,” Pederson said. “The thing is, with this many new players, new starters or guys in the lineup, you don’t get much time on task. You don’t get many reps during the week with these guys. So some continuity and timing in the passing game, particularly, can lack just a little bit. ...

“But we do our best to put guys in position and utilize their strengths so they don’t have to learn two different positions, for instance. They can just learn one spot for that week. Guys are doing a great job. They’re making plays. We saw it again (Thursday) late in the game with some of these guys that are making plays for us and helping us win that game.”

Backup running back Boston Scott, who is only 5-foot-7, made an excellent catch in the corner on a perfect strike from Wentz for an 18-yard TD that gave Philadelphia the lead with 40 seconds left.

“He wasn’t the primary read on that play,” Wentz said. “I stepped up in the pocket, and (Giants safety Jabrill Peppers) had pretty good coverage. But gave Boston a chance there to make a play and he did. He plays bigger than whatever he is. He made a great play. I was pretty surprised when we pulled it off. When I threw it I thought it was a little high, but like I said, he plays bigger than he is.”

“Quite honestly, it’s good to see your quarterback being able to put the team on his back and lead a comeback like he did,” Pederson said. “Obviously, the Baltimore game is another one where we made the comeback and put ourselves in a position to tie that football game. That part is good to see.”

The Eagles need to get healthy. Too many key players are out but they still have an opportunity to win a weak division.

Rookie receiver John Hightower made a 59-yard catch on the first of the two TD drives in the fourth quarter. He’s bounced back from a costly drop on a deep ball on the opening drive last week to make catches of 50 yards later in that game, and a pivotal one against the Giants.

After missing a 52-yard field goal at the end of the first half against Baltimore, Jake Elliott hooked a 29-yard try wide against the Giants.

5 — Wentz already has a career-high five TDs rushing and is using his legs to extend more plays and create opportunities.