Devon Still remains focused on the fight against cancer 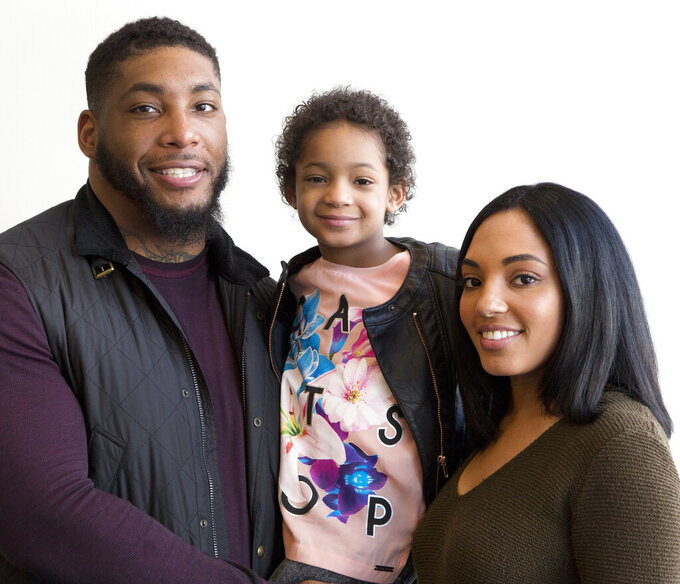 FILE - In this April 12, 2016, file photo, Devon Still and his fiancee, Asha Joyce, pose with their daughter, Leah, then 5, in New York. Leah was diagnosed in 2014 with cancer and became an inspiration to millions as her football-playing father shared details of her brave fight. She was given a prognosis of just over 50 percent to survive stage 4 neuroblastoma. Leah is now a healthy 8-year-old girl in third grade who lives in Houston. Devon Still has become an author, motivational speaker, and an inspiration--especially to strangers suffering like his family did. (AP Photo/Mark Lennihan, File)

SWARTHMORE, Pa. (AP) — Cheryl Colleluori had delivered a meal at a Philadelphia children's hospital to a family touched by cancer when she noticed the 6-foot-5 hulking man with a shaved head holding the hand of a little girl.

Colleluori instantly recognized Devon Still, the former Penn State star whose daughter Leah was diagnosed with a rare cancer that affects primarily infants and young children. Out of respect, Colleluori kept her distance and allowed the Stills their family time, but if she could have stopped him and shared a message, it was this: "You're a lucky, lucky man. I wish I was that lucky."

Colleluori's son Nick was an undersized pitbull of an athlete who parlayed talent and grit into a lacrosse scholarship at Hofstra. But toward the end of his freshman season in 2005, what Nick thought was an issue with his hearing instead was diagnosed as non-Hodgkins lymphoma. Nick Colleluori died at 21 years old on Nov 28, 2006, but not before he left a legacy carried out by his family: Nick's House, a free home for cancer patients, and their families, undergoing treatment in the Philadelphia area.

Colleluori finally got the chance to meet Still nearly 3 1/2 years later when the retired NFL lineman toured Nick's House . Leah Still is nearing four years in remission and her father has become an author, motivational speaker, and an inspiration — especially to strangers suffering like his family did.

"I just kind of admired how jovial you were, and trying to be as normal as possible in a very, very tough situation," Colleluori told Still inside the house.

Colleluori directed Still toward a portrait of her son above the fireplace in the home that fits up to seven families and comes furnished, with full bathrooms and other comforts of home. Nick Colleluori founded the HEADstrong Foundation from his hospital bed and more than 500 people are expected at the ninth fundraising gala for the nonprofit organization will be held Friday in Philadelphia.

"It's cool to find out how she recycled her pain to help other people," Still said.

Leah was diagnosed in 2014 with cancer and became an inspiration to millions as her football-playing father shared details of her brave fight. She was given a prognosis of just over 50 percent to survive stage 4 neuroblastoma. Leah is now a healthy 8-year-old girl in third grade who lives in Houston and is set to celebrate four years of her cancer being in remission on March 25, with a gala in Philadelphia for their "Still Strong Foundation."

"We're just fighting to get to that five-year mark," Still said. "She'll be declared cancer free. There's always a chance that Leah's cancer may come back because she has an aggressive form of neuroblastoma. But once you get through that third year, your chances drop significantly."

Still played three seasons with the Cincinnati Bengals and a year with Houston before he retired in 2017. His career was dwarfed by his daughter's fight with cancer — they were everywhere. Countless videos, poignant interviews and appearances that raised cancer awareness and funds. They authored a children's book together, "I Am Leah Strong." Leah even received the Jimmy V Perseverance Award at the ESPY Awards in 2015.

"Just fight for four quarters," Still said. "Regardless of what you're hearing from the doctors, regardless of what your prognosis is, or you read on the Internet, as long as your child is alive, you still have a chance to really win this battle with cancer. Leah failed her first treatment. The cancer ended up spreading all over her body. But because we didn't give up, we didn't throw in the towel, my daughter is now going on four years in remission."

Still was moved by Colleluori and her mission at Nick's House. Most families that arrive at the house are financially strapped and looking for a sense of community during the most devastating time of their lives. The HEADstrong Foundation has raised more than $9 million since 2007 and helped nearly 14,000 cancer patients and their families. Colleluori has walked the walk of cancer-stricken families and the house has become a support system for those in need, and it's a full house — 15 total people for families currently from South Carolina, Alabama, New York and Pennsylvania all reside in the temporary housing. The youngest cancer patient now in the 120-year-old house is just a 21-month-old boy with a rare leukemia, and the home is open to all ages and anyone with a cancer diagnosis. Colleluori had applications on her desk that she had to reject because Nick's House was at capacity — two patients who lived at the house this year have died — though expansion plans are on the horizon. More than 69 families have stayed at Nick's House, which is managed with volunteers, over the past year and the average stay is six-to-eight weeks.

The 29-year-old Still admires the program and how the families have persevered in the toughest times — a lesson he's still learning with Leah.

"If it comes back, it comes back and we'll just deal with it then," Still said. "But I'm not going to allow cancer to control us like it did for two years."